Happy 25th birthday, Link! You are now eligible to rent a car at any agency without having to deal with needlessly excessive surcharges! You are a man now!

Oh, what’s this? A gift for us? That’s a switch! When Mario celebrated his 25th anniversary, that little Italian miser gouged us out of $30 for a Super Nintendo ROM on a disc. That you are willing to distribute Four Swords pro bono to all DSi and 3DS owners must mean you truly value our friendship. I’m touched!

Hold the phone! Are you also telling me that this is not a straight port, but an enhancement with features not present in the original release? Will the wonders ever cease? There’s gotta be a catch, right? 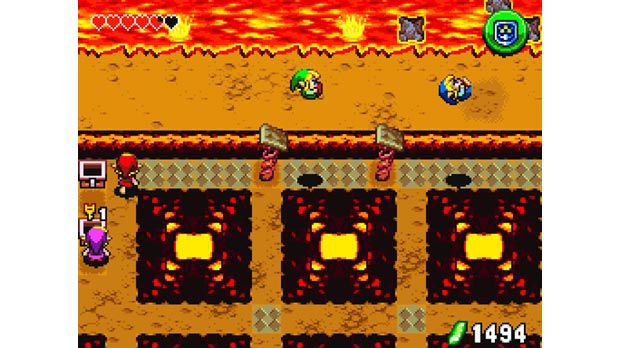 Before I begin, let me clear up a bit of confusion regarding Four Swords Anniversary Edition. It is not a re-release of the GameCube’s Four Swords Adventures, but of the original Four Swords, which was included as a bonus on the Game Boy Advance version of A Link to the Past. A lot of sites have been a bit unclear on this, and I apologize if at any point Destructoid added to that uncertainty. Don’t let that discourage you, though!

For those who never had a chance to play Four Swords, it’s the Zelda series’ first foray into multiplayer gaming. Players take command of one of four different Links, an occurrence rationalized by the ability of the titular Four Sword to split the soul of its wielder. The Big Bad this time around is the wind mage Vaati, who has captured Zelda, and it’s your quest to defeat him and prevent the unholy union of princess and evil eyeball-blob-thing.

Four Swords is a little less adventure-y and far more arcade-y than the typical Zelda game. Rather than explore an open overworld, you select self-contained levels from a map screen. In addition to beating the domain’s boss, you are also competing against the other players to see who can gather the most rupees. As a result, each game session fosters a fine balance of camaraderie and sadism. 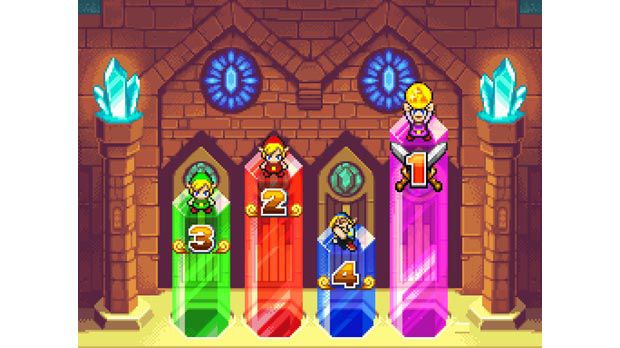 There are a lot of obstacles that require cooperation — lifting extremely large boulders, triggering multiple switches simultaneously, pulling baddies apart like taffy, etc. Usually, there are enough spoils for all the players. However, when the reward is a single treasure chest, you can guarantee that somebody will be throwing somebody else into a bottomless pit out of spite. In many respects, Four Swords is a precursor to New Super Mario Bros. Wii, although it’s much less of a headache to play in groups, especially since players are allowed to explore portions of the map independently.

There are three main levels, a final level, and an tutorial level. Figuring that a level can be cleared in under half an hour if you are quick enough, you would think that the game would be over in no time. Thankfully, there are plenty of replay incentives. Stage layouts and obstacles scale to accommodate the number of players, and even with a constant player count, there is a pool of maps from which the game randomly pulls. On top of that, clearing the game will unlock higher difficulty levels and, in turn, more elaborate maps. The dungeons may not technically be randomly generated, but there is enough variance to make each play session unique.

Grezzo, which also handled Ocarina of Time 3D, did a fine job of updating the game for fans of the original Four Swords. Most noticeably, the resolution has been increased to fit the DSi’s screen, so you can view more of the world compared to the Game Boy Advance release. More importantly, a new single-player mode has been added. 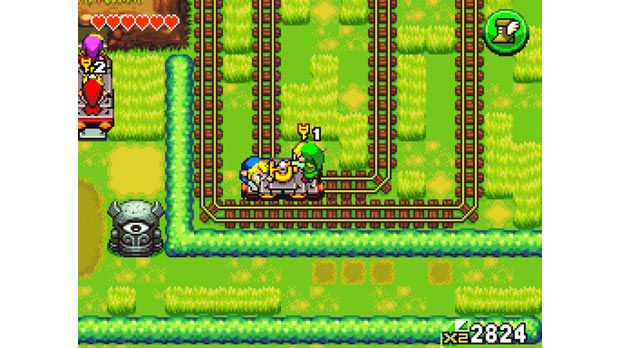 One of the biggest shortcomings of the original Four Swords was that it was multiplayer-only and that everyone who wanted to play needed a copy of the game plus a game link cable. As a free release on devices that communicate wirelessly, it ought to be a lot easier to get a session going. Nonetheless, a single-player mode is a boon for those who may want to practice the game on their own time.

The single-player mode is identical to the multiplayer one, save that you are in command of two Links instead of one. With a tap of the shoulder button, you can switch between the two, and by blowing your whistle with the X button, you can instantly summon the second Link to the first’s location and control their movements simultaneously. During portions when each Link has to perform different actions in conjunction, the computer automatically executes the second Link’s task.

Unfortunately, while the game is quite playable alone, the experience is still tailored for multiple people. With no one to compete against, rupee hunting becomes a slow, tedious affair. Concerning death, you can be brought back by paying a penalty cost, but if you are the only one collecting rupees, you are guaranteed to almost always have enough dough to pay the fee. The single-player mode makes it all too apparent that these aren’t your typical Zelda dungeons, and that may turn off the solo gamer. 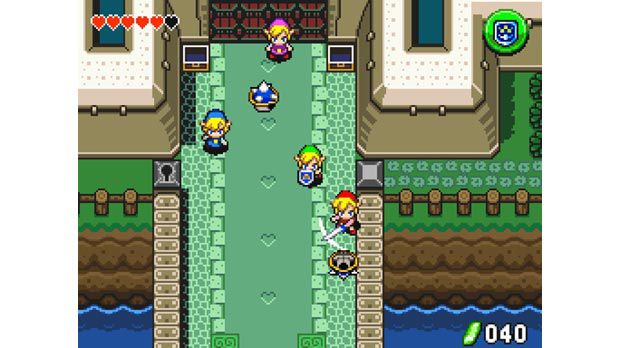 Beyond that, there are more surprises in store. After clearing the game once, you unlock the Realm of Memories, a batch of three levels based on A Link to the Past, Link’s Awakening, and the original Zelda. Everything from art assets to audio is pulled from the respective games, and even the Links receive a slight makeover. In the Game Boy level, the Links are rendered in spinach monochrome save for a splash of color to help players distinguish them, while in the NES level, the Links are 8-bit versions of their main game sprites!

By collecting over 30,000 rupees, you unlock the Hero’s Trial, another trio of levels that tests players’ skills to the max. These segments are some of most challenging I’ve ever experienced in any Zelda game. Whole platoons of enemies swarm you at once, and your rupee supply drains at an alarming rate as you die over and over again. If you feel that Zelda games have gotten soft in the past decade or so, the Hero’s Trial will be more than happy to kick your ass.

These two new areas easily triple the amount of content available in Four Swords, a surprising and welcome feat considering that this is a free game. The best part about them is that they can be played by anyone in multiplayer as long as the party host has them unlocked on his file. 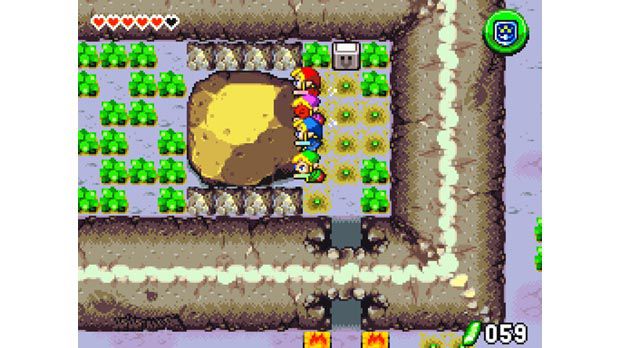 So about that catch…

First, there is no online mode. I can understand how hosting servers for a free game could be costly, but it’s still a bummer for those who lack DSi- or 3DS-owning friends in the vicinity. Then again, Four Swords demands communication and coordination, so unless voice chat was incorporated, an online mode would have been useless. Nintendo may one day jump on the voice chat bandwagon, but it’s definitely not going to be with a free game.

Second, there is a download window that ends on February 20, 2012, after which the game will be taken offline. I really see no logical reason why it can’t remain on the shop service indefinitely. Flipnote Studio can do it, so why can’t Four Swords? At the very least, Nintendo could switch it from a free to paid download. Whatever backwater reason for this arrangement, I advise you to download the game as soon as you can.

Despite those setbacks, Four Swords Anniversary Edition is a spectacular re-release packed to the brim with more content than most paid downloadable titles; that all of this is available for free is simply mind-blowing. The multiplayer is as deliciously evil as it ever was, but I just wish more tweaks were made to tailor the single-player mode for solo adventurers. If you are able to gather a group, however, you will have a blast.