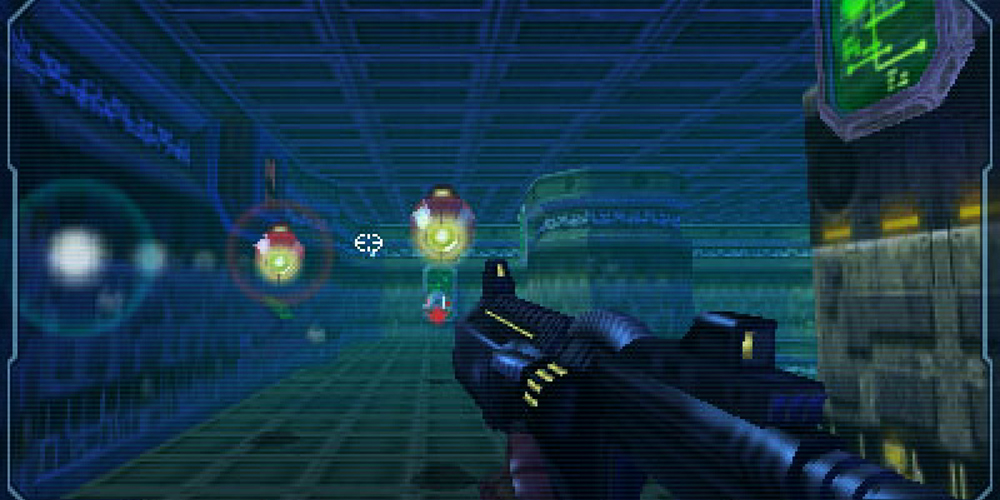 Five years ago, a little game by the name of Moon launched on the Nintendo DS. Being a competent first-person shooter on a portable platform, it was something of a curiosity. Studios seldom attempt the genre on handhelds, and examples of decent experiences are even rarer still.

So perhaps it doesn’t come as much of a surprise that the Nintendo 3DS library is one with a dearth of first-person shooters. Enter Renegade Kid and Moon Chronicles, an updated version of the 2009 DS game with remastered visuals and a new episodic structure, to fill the void.

For those unfamiliar with the original game, as I was before starting this journey, Moon Chronicles is a tale set in the near future, following generic protagonist Major Kane on a mission to investigate some bizarre happenings on, yes, the moon. A mysterious hatch has been discovered on the satellite’s surface, and he has the unenviable job of figuring out what’s going on beneath the surface.

Due to the game’s episodic nature, we only get a taste of the story in the first four chapters. But, suffice to say, things go terribly wrong, people die, and you’re left to explore a hostile foreign environment. Along the way, you’ll receive orders from your commanding officers, who seem to know more than they let on, which gives it a nice dark sci-fi vibe reminiscent of Aliens or Event Horizon — except, you know, nowhere near as compelling.

In terms of gameplay, Moon Chronicles emphasizes exploration and atmosphere more so than action. Seemingly drawing inspiration from the Metroid series, players will find themselves in drab corridors with roadblocks that necessitates some mild puzzle solving. Frequently this involves utilizing a tiny RC robot, which can squeeze through tight spots and open doors from behind.

The combat is generally bland, with predictable enemies that can be easily outwitted by strafing back and forth or running around in circles, but one encounter in particular left a lasting impression. My little robot pal, armed with only a stun gun, wheeled around an obstacle and came up against multiple foes. The enemy drones started ripping the little guy apart with laser fire, requiring me to make a mad dash to unlock the doors so Major Kane could come to the rescue just in the nick of time. It was a rare exciting moment in an otherwise tepid experience.

While the shooting itself is pretty simplistic, the controls can make things a tad more complicated. While the game does boast Circle Pad Pro support, the 3DS obviously doesn’t come equipped with a second analog stick as standard, which might be frustrating with players lacking the peripheral. Moon Chronicles handles this one of two ways: using the stylus and touchscreen or, alternatively, the face buttons and trigger.

While the latter method is more comfortable, as holding the 3DS upright with a pair of hands is far easier on the wrist, it’s also less responsive. Fighting enemies with this control scheme adds a great deal of challenge, but not in a good way, as the speed of the reticle moving around the screen is painfully slow. The stylus method is far more accurate, but supporting my 3DS XL with a single hand for an extended period of time gave me cramps. And I never really figured out how to hold it in a way that felt natural.

Thankfully, the experience is a short one, so players needn’t suffer too much pain. My first time around, I completed the episode in roughly an hour. Much of that run time included needless backtracking, though, as I found myself turned around in rooms that looked nearly identical to one another. After getting my bearings, I promptly went back through the episode for a speed run, which clocked in at under 30 minutes.

Now, I’m not usually one to equate game length with value, but roughly an hour of gameplay for nine bucks seems a little steep. And while more episodes will be coming at a later date with smaller price tags, I’m not sure I’m too fond of the pricing model. Renegade Kid is asking players for a larger sum upfront, before they know what they’re really getting into. It’s a relatively high barrier of entry, which I could see limiting the potential size of the audience.

Aesthetically speaking, Moon Chronciles looks considerably nicer than the original game, and still runs at a clean 60 frames-per-second, even with the stereoscopic 3D switched on. That said, the art direction is fairly uninspired and the visuals still seem a tad dated. These issues are most evident with the nausea-inducing robot camera and in brief cutscenes scattered throughout the experience, which see a significant nosedive in quality with the standard graphics.

After a bit of exploring, shooting, some light puzzle solving, a boss fight, and a hilariously precarious vehicle section; the experience just kind of ends. You go into a new shaft and it’s over, not so much in a cliffhanger but more of a break between levels. And that’s what this really is: the first level of a game. I’m kind of torn between wanting to play more or just saying ‘Well, that was fun for a bit’ and moving on with my life.

It’s really difficult to give Moon Chronicles a strong appraisal one way or the other. It’s far from a stellar experience, but isn’t a bad one either. There just isn’t anything here that hasn’t been done better elsewhere, and I can’t see anyone other than FPS-starved 3DS owners or hardcore fans of the original being too interested.

Regardless of how good Moon Chronicles may or may not be, though, it will forever hold the distinction of being the first FPS on the Nintendo 3DS. And nobody can take that away from it. Nobody.