It’s surprising that there aren’t more dungeon-crawling role-playing games on portable systems, given that the mindless combat and compulsive need to scour caverns for loot seems like a perfect handheld fit, a situation where one can just pick up, grind away, and put down whenever needed.

A few games have cropped up, of course, with GameLoft’s notable contributions to mobile devices, but Heroes of Ruin is one of the few truly authentic dungeon-crawlers to hit a dedicated gaming handheld. As a lover of the genre, I find this game’s noble efforts to be something of a double edged sword. 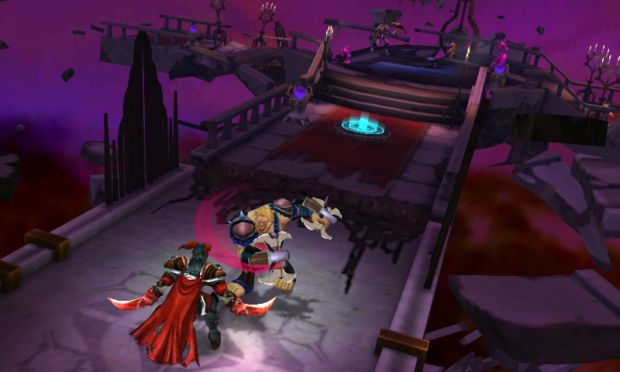 Heroes of Ruin has a very simple goal — bring the likes of Diablo and Torchlight to the Nintendo 3DS. On a fundamental level, the game succeeds, providing a solid few hours of treasure-hunting, monster-slaying, and quest-solving, with plenty more on offer for those who want it.

Played from a traditional isometric perspective, Ruin offers four character classes — the ranged Gunslinger, magic-wielding Alchitect, brutal Savage, and balanced Vindicator. They fulfill the stereotypical roles that players are used to by now, as do the range of imps, demons, and other monstrous creatures that serve as opposition, regularly spawning throughout the game’s varied dungeons and dispatched with simple button-mashing attacks.

Each class can equip up to three special skills, mapped to the B, X, and Y buttons and used by spending energy. Regular attacks can be spammed with A, which can also be held for a charged attack. Players get a few defensive maneuvers too, able to block by holding R or dodge by blocking in conjunction with the movement controls. If this all sounds like standard fare, that’s because it is — Heroes of Ruin‘s intention is not to break the mold in any way, focused as it is on providing a recognizable experience for fans of the genre who want to play what they’ve always played in a portable space.

While Heroes of Ruin has the groundwork laid down perfectly, it trips up on a number of details. For one thing, the game feels too slow, both in terms of progress and character movement. The formulaic structure has players entering dungeons from the hub world, performing a mundane task or two, then warping back to the hub to start again. Nothing exciting happens in the hub itself, and the dungeons become so predictable, and are so full of dead-ends, that things start to get tiresome after a few hours of campaigning.

More annoying is the slowness of the player character itself. Aside from a sluggish movement speed, the attack animations are rather lethargic and cannot be broken in any way, meaning that combat often feels stunted and lacks a sense of flow. This is especially noticeable with blocking and dodging, where it takes too long to stop attacking and start rolling before the enemy hits you. I found the game became far less exasperating once I gave up on defensive moves altogether and just focused on quaffing potions whenever my health got too low. Lucky then, that the game drowns players in health potions at every turn.

Combat also suffers from a spotty targeting system that will automatically focus on what the game decides is the most pressing target, even if the opponent is really far away or even non-existent. This can be a real pain for ranged heroes, who will often need to recalibrate before they’ll hit anything. Also of note are enemies which need their blocks broken with charge attacks, yet will stop shielding and start attacking the moment the player charges. As usual, it’s best to ignore the game’s advice and just spam regular attacks until the opponent gets bored and tries to sneak a hit in. 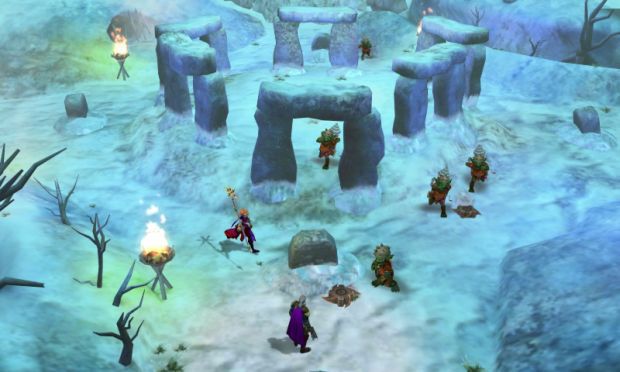 After so much complaining, one can be forgiven for thinking that I hated my time with Ruin, but it still manages to be a rewarding little game in spite of any persistent grievances. While combat animations are lagging, it’s nevertheless fun to cut swathes through the opposition with a range of interesting skills. Each class has three skill trees that can be mixed and matched, allowing for a decent amount of customization, and players get to spend their stat points how they wish, investing in health, attack, and energy according to their own whims. It’s not the deepest of character building, but it manages to do more than the current market leader does.

n-Space really knows how to drip-feed loot, providing its rewards at just the right moments in order to encourage players to keep fighting and find better stuff. New weapons and armor tend to appear just before things get too boring, providing a rush of compulsion that slingshots the user to his or her next big score. Outside of the main quests, sidequests are all over the place, so there are a ton of things to do for the adventurer whose addiction demands more.

One feature for which Heroes of Ruin must be commended is its online integration. Among 3DS games, Ruin may well be the most in-depth online experience to date, featuring drop-in/drop-out co-operative play, voice chat, and even a range of special game challenges that update from the Internet frequently and provide unique loot rewards. More importantly, everything works surprisingly well — online games are stable and easy to jump into. Once in a game, I found nothing lagged, and I didn’t drop at all. The only setbacks are a prevalence of lengthy load times, and the fact that if you host an online game, you’ll get booted from your entire session the moment you close the 3DS — a real hassle for someone like me, who frequently plays in bites. Still, the latter issue is easily remedied by playing solo. 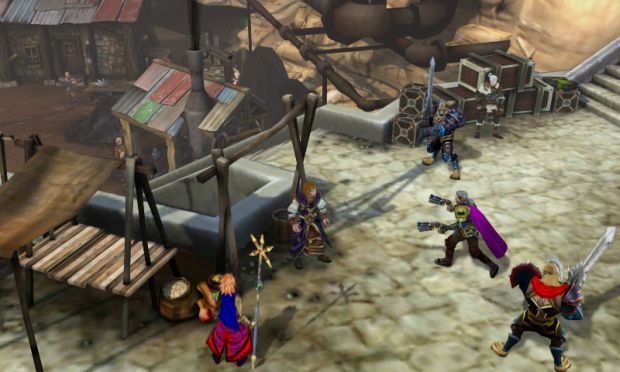 As with most 3DS games, the graphics aren’t exactly spectacular, featuring blocky characters and lackluster textures. The Blizzard-inspired art direction doesn’t really help, as providing darker and more grounded visuals really aren’t the way to go with 3DS titles. Still, it’s not repulsive to the point that it should turn anybody off. The 3D enhancements are interesting — they work well for the most part, the isometric perspective giving a stunning sense of depth, but sometimes during cutscenes (notably during boss introductions), character models are flung so far forward that they take on a bizarre, disorienting appearance, something that the eye struggles to focus on. It’s fairly distressing, actually, though thankfully rare. 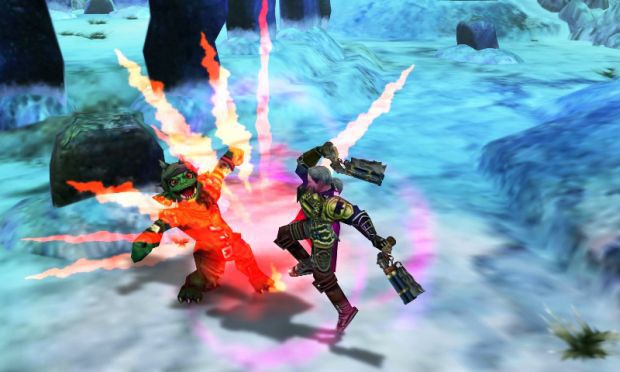 I said at the top of the review that Heroes of Ruin was a double-edged sword. Specifically, it’s great to have a dungeon-crawler on the 3DS, one that’s not only solid, but provides a suitable set of online features. However, Ruin is riddled with minor annoyances that never seem to let up, and progress becomes so predictable that it’s a struggle to get through those last few mandatory dungeons. It’s a good game, undoubtedly, and there’s plenty to enjoy, but the nature of the experience is such that it just makes me want more and better — something as fun as this, without the setbacks. Heroes of Ruin didn’t so much sate my appetite for portable action-RPGs as make me yearn for more. That is, at least, a point in Ruin‘s favor — it’s entertaining to the point that I want to further my experience rather than lessen it.

Praises and complaints aside, Heroes of Ruin does exactly what it wanted to do — give 3DS users a solid hack n’ slash RPG. While it flounders on the way to that simple goal, it’s a goal that has been undoubtedly reached. Better may come along in the future, but right now, this does the trick.