Stop me if you’ve heard this one: a European archaeologist with a penchant for puzzles and his plucky young sidekick receive a strange request that leads them on an adventure to uncover the truth behind some ancient mystery. Also, this occurs on a Nintendo handheld.

While the inspiration for Doctor Lautrec‘s story may be completely obvious to fans of the Professor Layton series, the team behind Forgotten Knights decided to include more varied gameplay than just the straight, point-and-click puzzle solving seen in the Layton games. The problem is that none of the added gameplay ideas are particularly good.

To start off on a positive note, the presentation in Doctor Lautrec is not half bad. Exposition is delivered through sharply animated hand-drawn cutscenes and dialogues, as well as through less attractive game engine cutscenes. There is a pretty substantial amount of voice work present, and the actors do a decent job with their roles. Nothing about the presentation is phenomenal, but the art, animation, and sound design is above average for a third-party 3DS game.

That is, unfortunately, where the compliments for Lautrec end. While a puzzle solving adventure always sounds enticing, there is just too much boring filler to wade through to find any enjoyment here.

Doctor Lautrec and his sidekick Sophie search for “Treasure Animatus,” or living treasure, in the Parisian underground, but when a young woman brings to Lautrec the plans for a strange machine that can decipher an ancient code, the duo… continues to enter the tunnels under Paris in search of Treasure Animatus.

To start a mission, Lautrec and Sophie talk to the local treasure map seller, who provides them with cryptic riddles that lead to the entrance to an uncharted underground tunnel. Typically, Lautrec and Sophie will throw out several blatantly incorrect ideas on where to start looking, then they will travel to those places, find nothing useful, and have an epiphany on where the actual entrance is. If the player can figure out the riddle before the characters do, he can just go straight to the entrance without having to wait for the characters to figure things out. However, many of the riddles require pretty in-depth knowledge of Parisian landmarks and French history, so for the most part, players will have to ride along, advancing dialogue until Lautrec offers the answer. 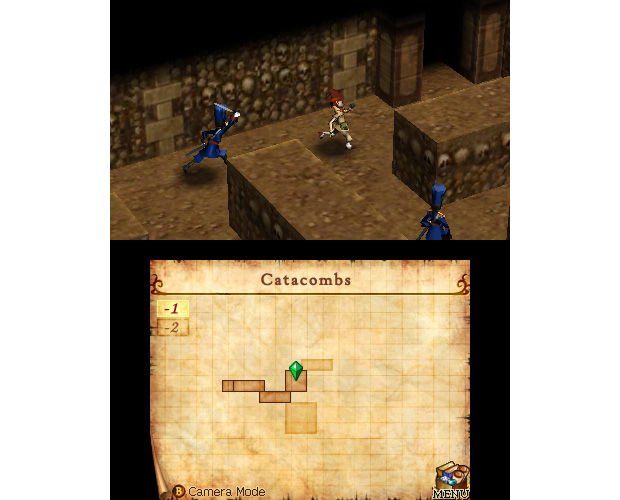 That’s when the stealth sections begin. If one of the slowly moving police officers catches Lautrec in his vision cone, he will chase Lautrec out of the current room, resetting all of the objects inside. It can be frustrating because, in addition to particularly unexciting stealth gameplay, these sections also include box-pushing puzzles. However, the puzzles are not really puzzles as the solutions are obvious, but the execution is the trouble. Lautrec pushes boxes at a snail’s pace, and there are few things more irritating than spending several minutes moving boxes from one side of a room to another, only to be caught and have all of the box-pushing progress reset. Later on in the story, the policemen are replaced with the titular Forgotten Knights, but aside from appearances, they are functionally identical.

After a few stealth rooms, Lautrec and Sophie will encounter locked doors that can only be unlocked by solving touch screen puzzles. Of all of the different activities in Forgotten Knights, these puzzles are probably the strongest, but they still range from completely mindless to merely uninspired. Some of the worst are crossword puzzles, wherein each word is provided and the task is simply to make them fit, and spot-the-difference puzzles, in which a cloud is deleted from a skyline and the player must recognize it. There are some less stupid puzzles, like what-comes-next-in-the-sequence and fit-the-shapes-into-a-container logic puzzles, but nothing that is ever very mentally taxing. 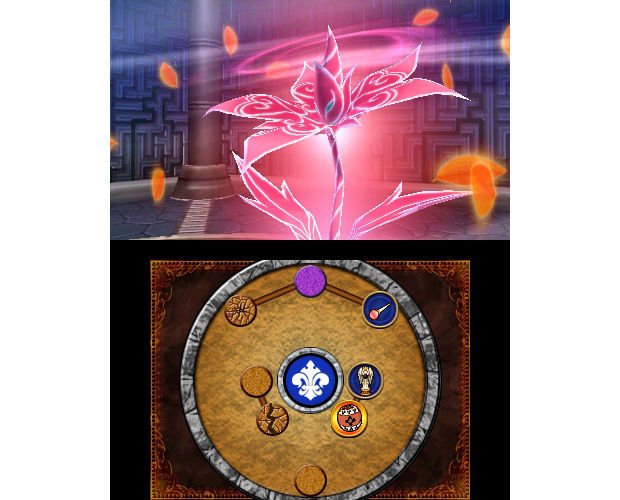 After solving a puzzle and making it through a door, Lautrec and Sophie will usually find a Treasure Animatus and will have to try and tame it before taking it. This requires a Pokémon-like strategy of weakening the treasure without killing it, but the battles are really poorly explained and aren’t particularly exciting. Placing previously owned Treasure Animatus on pedestals around the one to be tamed will cause those pieces of treasure to attack and then be attacked, after which both the pedestal and the treasure is used up for that battle. If Lautrec runs out of treasure or pedestals before weakening the wild treasure enough, the battle is a failure and must be restarted.

There is a rock-paper-scissors element to the battles, but beyond that, it seems like they are either solvable regardless of the order or location of treasure placement or they are not solvable simply because Lautrec’s treasure isn’t leveled highly enough. It may have been an interesting idea somewhere early in development, but in practice, the battle system is more of a chore than anything else.

Looking at the puzzle list, it seems that Doctor Lautrec and the Forgotten Knights is quite lengthy. Each dungeon only houses about three puzzles or so, but there are more than 300 puzzles to solve in total. If the game were simply a collection of these puzzles that the player could freely choose to play or ignore, it would have been an inoffensive, albeit slightly dumbed-down puzzle title.

With all of the incredibly boring slogging that goes on between puzzles, and considering that the quality of the puzzles themselves ranges from bad to mediocre, Doctor Lautrec and the Forgotten Knights is impossible to recommend to even the most ravenous puzzle players. Even if this game were available for free, I wouldn’t recommend spending time with it.