The combination of puzzle and platforming is one of my favorite hybrid genres of all time. There’s something about having to figure out challenges on the fly while testing your twitch capabilities that makes for a unique experience, and the mix of the two tends to fit perfectly more often than not.

Unfortunately, the formula doesn’t always go right. Sometimes, the action elements feel off due to wonky physics, and not all puzzles are created equal. Color Commando is one of those games that could have been so much more with just a few tweaks. 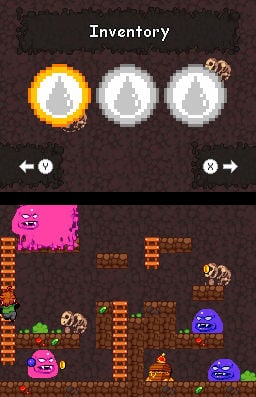 Despite the latter half the moniker that may imply a heavy emphasis on action, Color Commando is actually a puzzle game. The only “action” you’ll be participating in is falling, moving, climbing ladders, and touching the screen to paint. See, Color Commando plays out the same way in nearly every level — there’s three optional coins to grab, and a treasure chest goal somewhere on the map.

It’s your job to pick up different paint balls (pink, purple, or green) to gain the ability to “paint” the screen by tapping it, which nullifies enemies of the same color in a small square-shaped area. On paper, it makes for some pretty interesting puzzle possibilities, as you essentially have to choose which area to paint (even though there might be multiple enemies of the same color), since you only get one glob per color per map. At first, you start to see the potential in the game as you pick it up, but it quickly goes downhill from there.

The main issue with the game is hit detection — to be blunt, it’s off. Many a time I’ve blotted out an area, making it a safe zone from the same color enemy only to find out that it wasn’t, and one pixel wasn’t covered, causing me to die and restart the entire level. Some of the puzzles are outright broken as well. For instance, there are a few areas where it’s obvious that you’re supposed to fall off a ledge into danger to grab a coin — but in many cases, you can just teeter off the edge and grab the coin without falling. The design of a handful of levels feels unfinished, and unpolished, leading to some really easy 100% victories without much of a challenge.

It’s a shame, because the retro veneer is fairly charming, as is one level tune that sounds like it’s straight out of the RPG Lunar. But in this case repetition is a curse — you’ll eventually get sick of hearing the same song over and over and seeing the same two enemy variations level after level.

There’s five worlds with five stages each (one in each set is a bonus level, unlocked by getting every coin in that set). If you’re skilled at puzzle platformers, you’ll finish it extremely quickly — basically, for a few bucks, you’ll be getting around an hour of entertainment. It took me about 45 minutes to nearly 100% the game. As an aside, it’s actually on DSiWare, so you don’t necessarily need a 3DS to play.

Color Commando has initial shades of fun, but it’s basically over before it starts. Despite the cheap-looking enemy designs, there is a decent amount of charm here — the game just doesn’t get an opportunity to develop it. If you’re itching for a platform puzzle title and have exhausted all of your choices on both the DS and 3DS, Color Commando is a decent way to spend a couple of bucks, but otherwise, it’s skippable beyond a shadow of a doubt.