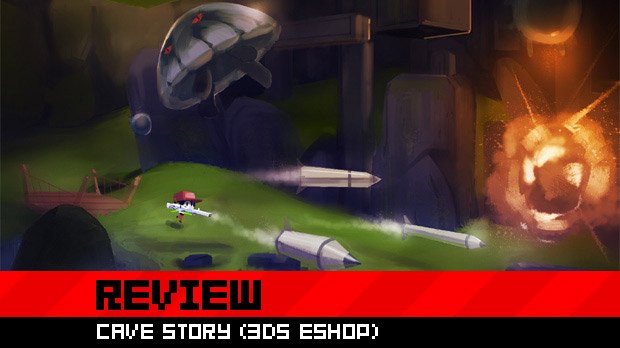 For those of you who have lost count, this is the third time that I’ve reviewed Cave Story, and the second time I’ve reviewed it on the 3DS platform. That may sound like a lot, but I’ve actually been slacking. This eShop-specific version of the game marks the fifth time that publisher Nicalis has put Cave Story (WiiWare, DSiWare, Steam/iTunes, 3DS retail, eShop) up for sale.

The more cynical among us may scoff and say that Nicalis is just milking Cave Story for the big money it brings in. That’s not the case. Nicalis could get a lot more potential profits from spending time on publishing games that people don’t already have access to.

No, the reason that Nicalis keeps re-releasing Cave Story is that the company’s CEO Tyrone Rodriguez really loves Cave Story. I think he wants to marry it. For real.

There’s good reason for that. Cave Story is one of the most re-playable, continually enjoyable games I’ve ever encountered. This new release is among the best, if not the best, version released yet.

This latest iteration of Cave Story was made to replace the DSiWare version of the game released in 2010. Tyrone and Cave Story creator Daisuke “Pixel” Amaya weren’t happy with how that version looked on the 3DS, so they went all out on adapting the game for the newer console. Sadly, technical limitations prohibited them from making this new version a free update to Cave Story DSiWare.

Nicalis and Pixel did their best to make up for that by loading up the eShop version with new content. The resolution and playable screen size have been optimized for the 3DS, stereoscopic 3D has been added, the DSiWare’s unique feature (Jukebox mode) is still in, and all the modes from Cave Story+ on Steam — Boss Rush, Sanctuary Time Attack, Curly Story, Wind Fortress, and Nemesis Challenge — are all here as well. 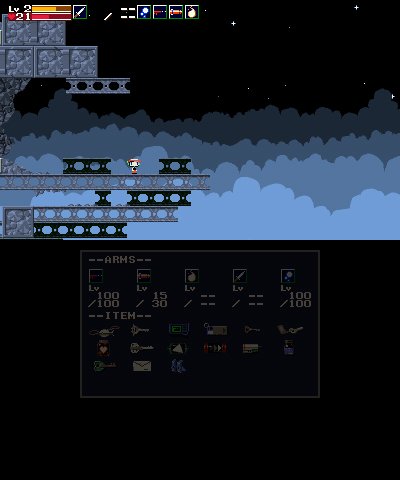 If you’re new to Cave Story, check out the review Anthony Burch (writer of Borderlands 2 and Dtoid alum) penned for the original freeware version of the game back in 2006, and/or my review of the WiiWare port back in 2010 (and if you’re really curious, the review of the 3DS retail version from 2011). That’s where you can get a look at what the main game is all about. For the rest of this review, we’ll be focusing on the things that make this new release of Cave Story different from the prior versions we’ve reviewed.

Lets start with the bad news first. The game is missing the larger, redrawn graphics from the WiiWare/Steam/iOS version of the game. Thankfully, the small screen size on the 3DS makes the “old” graphics looks almost identical to the new ones. Ultimately, those new graphics have become largely unnecessary. Their more detailed look was originally put into place in order to make the characters look less flat. The game’s 3D display accomplishes the same goal without altering the original artwork. This may be the original art, but this is still the most crisp, well-defined, pronounced version of Cave Story yet. 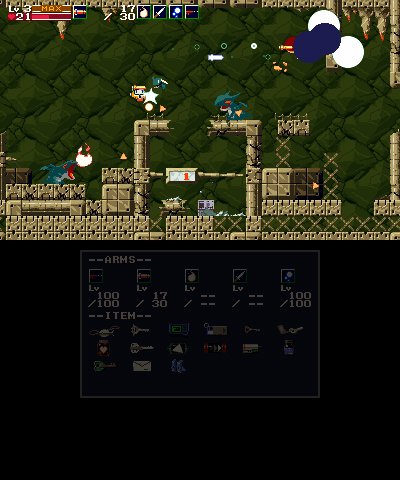 It’s not just the 3D that’s responsible for the game’s sharp new look. Cave Story eShop has been custom fit for the 3DS’ larger screen size, resulting in a sharper level of definition and a stronger sense of place than the DSiWare version. With the action zoomed out, more activity can fit on screen at once, and players will be likely to less likely to focus in on one of the (now smaller) characters with so much going on at one time. That can help the player to take in everything going on and make more informed decisions. It’s easier to string a series of jumps or dodge a volley of attacks when you can see them all coming. As much as I prefer the widescreen look, you can revert to original dimensions if you want.

The game’s controls are also customizable, allowing you to flip the jump button and shoot buttons to suit your fancy. There are a few other balancing tweaks that truly diehard fans may appreciate, but most fans might not pick up on. For instance, the in-game map no longer runs along the bottom screen at all times, which encourages the player to not rely too heavily on it. That’s not something that everyone will notice or even care about, but it’s an example of the care that went into this revamp. 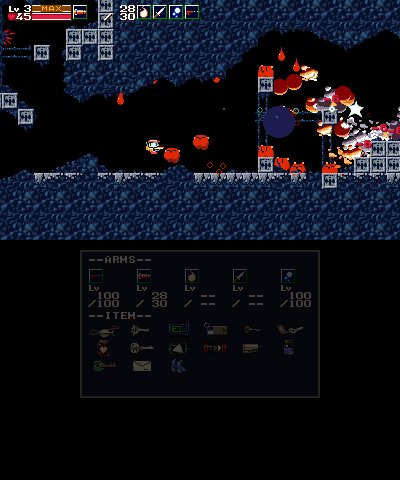 The Boss Rush, Sanctuary Time Attack, and Curly Story modes are just as they were in the WiiWare version. The more notable additions here are the two modes imported from Cave Story+: Wind Fortress and Nemesis Challenge. Both are adapted from level designs from the unreleased beta of the original Cave Story, and are just well-designed as any parts of the main game. They might be even a little better, as both modes assume that the player is skilled enough to get through the game’s campaign, and are therefore ready for the roughest stuff that Cave Story can offer.

The Wind Fortress starts with a fantastic platforming section where the player’s skills at jumping and hovering with precision are immediately pushed to the limit. Your weaponry is limited to the Blade and the Spur, which limits your defensive options when the screen quickly fills with jerkface flying insects that love to knock you to your death. They make mid-air safety a bit of a problem. From there, the focus turns to action, with new enemies and a new boss fight which are focused on tense, nail-biting shootouts. I don’t want to spoil what happens, but I’ll tell you that the Wind Fortress is a real love letter to the fans. 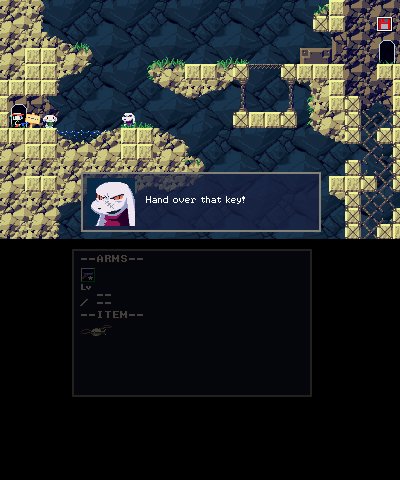 The Nemesis Challenge is an even harsher test of player skill. It starts you off with just ten health, the Booster 0.8 (which allows you to hover for only brief period of time) and the Nemesis, the strangest weapon in the Cave Story world. The base stats for the Nemesis are fairly good, but if you grab even one power up, the gun gets substantially worse in both power and range. Just two power ups will take the weapon to its maximum “upgrade,” where it shoots harmless rubber ducks. The only way to make the gun more effective again is to take a hit, forcing the player to swap health for firepower.

With only ten health and a horde of enemies in your face, the temptation will be to take down foes fast. The downside to that strategy is that killing enemies is the fastest way to fill the screen with power-ups, which is the last thing you want to do with the Nemesis. Those conditions reward a player who is able to dodge enemies as opposed to destroying them, though that’s a lot easier said than done. On top of that, the level design of Nemesis Challenge is about as precarious as it gets. Platforms are few and far between. Combining that stress with the pressure to play in pacifistic style makes for a unique series of obstacles that even the most seasoned Cave Story veterans wont easily overcome. 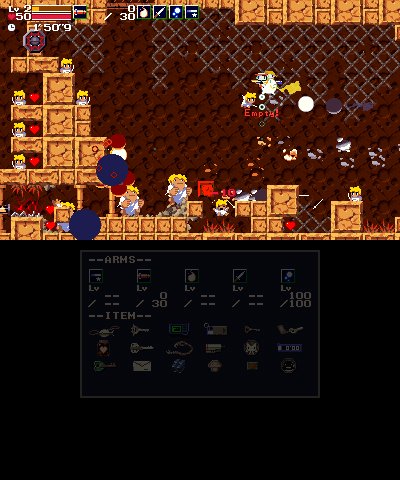 Hopefully by now it’s clear that I love Cave Story for eShop, but there are a few things that keep me from proclaiming that it’s the only version of the game you have to play. It lacks the highly detailed backgrounds and additional level designs found in the 3DS retail version of the game (like the Inner Wall) and the previously mentioned sprites from the WiiWare/Steam/iOS remakes. It also lacks the full Christmas and soon-to-be-released [redacted] Holiday themed skins found on the Steam version of Cave Story+ (though you do get the Reindeer and Vampire sprite swaps from the WiiWare port).