Without a doubt, Renegade Kid totally killed it with Mutant Mudds earlier this year. With a simple, no-frills structure that struck a major chord with players, the eShop platformer was a sweet dose of purity in a genre that’s struggling to maintain relevance in this modern gaming age.

Having taken the side-scrolling platformer “back to basics,” Renegade Kid is looking to do the same for the tile-matching puzzler. Bomb Monkey may lack the flash and pulse-pounding intensity of titles like Lumines or Meteos, but it’s immediately accessible to anyone who may be turned off by the seemingly high level of complexity of those other games.

Plus, it features multiplayer on a single 3DS! That’s a treat!

An inexperienced Bomb Monkey will soon discover that his finely placed bombs result in out of control detonations. He may accept this philosophically as a microcosm of life, or learn to control it by noticing that adjacent series of similarly-colored bloks will participate in a chain reaction.

The above is an excerpt from Bomb Monkey‘s digital manual. I’m drawing attention to the manual because, as the first thing new players are likely to inspect, it’s pretty damn clever. Instead of a clinical list of the rules, it reads like a warm and inviting career training guide. I always appreciate it when developers apply just as much care and polish to their ancillary materials as they do the games themselves.

The manual’s lighthearted tone reflects Bomb Monkey‘s gentle and low-key nature — despite the gameplay hook of using bombs to blast away “bloks,” it’s a fairly stress-free experience. There are no arcane strategies to learn or strict regulations to adhere to. You’re just a monkey dropping bombs because that’s what bomb monkeys do!

To play, you hold the 3DS book-style — as in Hotel Dusk or Rhythm Heaven for the original DS — and operate your monkey using only the D-pad (or stylus, if you prefer). Move the monkey into position on the tightrope and drop bloks wherever you like. Every few turns, you’ll acquire a bomb that can destroy bloks horizontally and vertically in a one-blok radius; destroying a blok will also destroy any like-colored bloks adjacent to it.

There are special bloks, too. When strikers are destroyed, they’ll clear an entire row or column; strategic placement of strikers can lead to massive chain reactions. There are locked bloks that require two hits to destroy and can interrupt blast chains. Locked bloks can be destroyed instantly by time bombs, with double the blast strength and radius of regular bombs, but which must be dropped before they explode in your face, temporarily stunning you. Finally, by destroying letter orbs to spell out “BOMB,” you’ll go on a bombing spree for ten seconds. 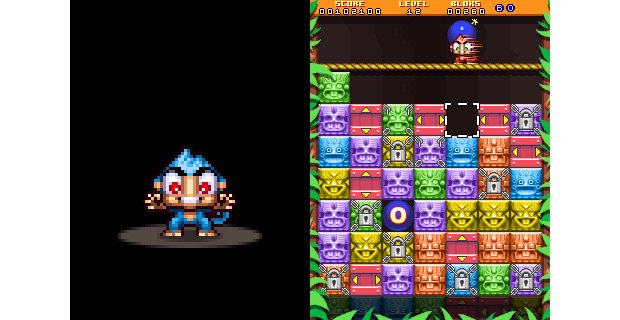 The main game mode is Endless, in which you simply play until the rising ocean of bloks reaches the top. Then there is 3 Minutes, similar to Endless only with a time limit; Rescue, in which you must blast a cage 50 times to free your monkey friend; and Numbers, in which you must clear as many screens as you can by destroying the three numbered orbs in increasing order.

But the big surprise is the multiplayer. Both players play on the same machine — Player 1 uses the D-pad and is assigned the touch screen, while Player 2 uses the four face buttons and is assigned the main screen. You can play Co-op, in which each player has a unique game board but can send gifts like extra bombs to their partner, or Versus, in which large combos will drop garbage bloks on the other board.

Simultaneous multiplayer on a single portable device is such a rarity — the only other title I can think of off the top of my head is WarioWare on GBA. Unless you are attending a major event like PAX or MAGFest, where almost everyone is toting a handheld of some kind, you aren’t likely to bump into someone else with a 3DS while walking the street, much less one in possession of the same game as you. Single-device multiplayer is an invitation to anyone in the vicinity to go a few rounds, thus breaking down that barrier preventing handheld gaming from being a shared experience. It’s a much, much welcome feature, and I give Renegade Kid tons of praise for incorporating it.

Of course, you should be aware by now that Bomb Monkey couldn’t possibly play well with any 3D effects. Just as well, because there isn’t any 3D functionality whatsoever. There are 3DS games with 3D-less segments, but this is the first one I personally know of that lacks the feature entirely. I’m just glad 3D wasn’t shoehorned in. More than that, I’m glad that there is at least one developer out there that understands that you don’t have to force unneeded features for the sake of checking off a box. 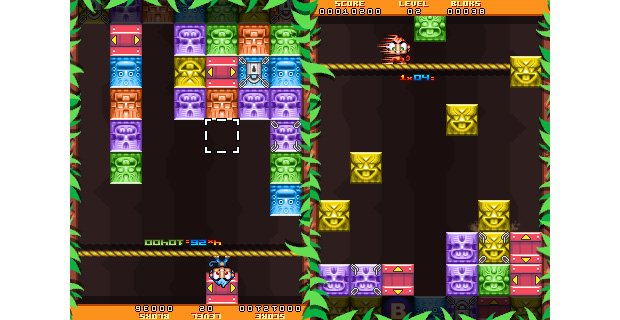 As with Mutant Mudds, Bomb Monkey plays well without necessarily shaking its genre’s foundation. Lacking the excessive bloat of modern puzzlers, it echoes the Panel de Pons and Tetrises of the past — easy to pick up, yet rewarding to those with the patience and perseverance to rack up a big score.

However, your continued enjoyment is dependent almost entirely on your disposition towards score attack gameplay. I would have appreciated something akin to a challenge mode, a collection of levels in which you must clear bloks within a set number of moves. It would offer an alternative goal apart from the elusive “high score,” plus it could help inspire advanced combos that can then be employed in the main game. The available modes are decent, but something else is definitely needed to “cleanse the palate” between modes as well as to extend the game’s lifespan.

Bomb Monkey is a solid puzzler that keeps the rules as well as the controls nice and simple. It might not totally blow you away or engage you for long if you aren’t a total score junkie. Still, the ability to play with another person on a single 3DS is such a novel treat that I can see the game being pulled out months down the line for quick pick-up games with your friends.