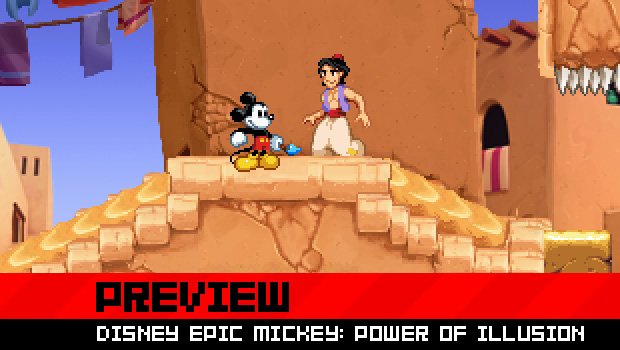 Epic Mickey 2 on consoles can go jump into a river

I had a bit of trouble containing my excitement when Disney Epic Mickey: Power of Illusion was first revealed. Not only did we learn that it is a hand-drawn 2D platformer by DreamRift, the same team behind Monster Tale and Henry Hatsworth in the Puzzling Adventure, we also learned that it is a follow-up to Castle of Illusion on the Genesis. As a Sega child, this latter piece of news made me completely lose my mind.

Since then, I’ve been soaking in every update, hoping to to quench my thirst but to no avail. When Chad Concelmo shared his hands-on impressions from E3, I had to bolt my feet to the floor to keep from floating away. The wait was too much!

Luckily, I was invited to Walt Disney World in Orlando to attend a Power of Illusion demonstration led by Junction Point’s Warren Spector and DreamRift’s creative director Peter Ong. After the duo ran through the game’s creation, I was able to hop onto one of the 3DS units available and play a few areas, including the newly unveiled Aladdin-themed environment.

The smile never left my face. 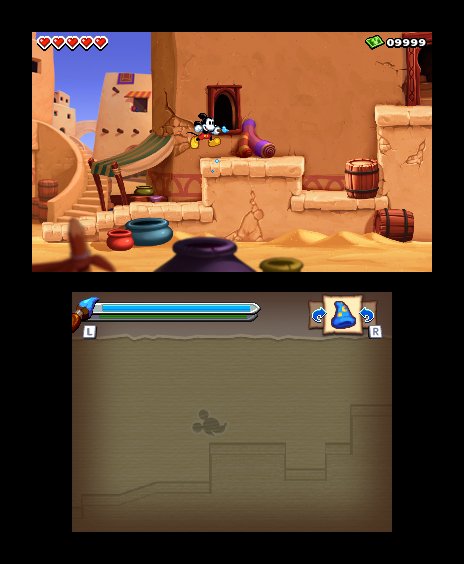 The story behind Power of Illusion‘s existence is just as incredible as the game itself. Sitting in that meeting room with all the other press members, I tuned in as Warren Spector recounted how DreamRift became involved with the Epic Mickey universe.

In case it isn’t public knowledge by now, the original Epic Mickey is officially the best-selling, single-platform software title in Disney’s history, ensuring that the sequel would be getting the full five-star treatment. Junction Point has been working hard to get Epic Mickey 2 running as many platforms as possible — Wii, Wii U, PS3, 360, PC, and Mac — but Warren insisted that the 3DS should receive something a little extra special instead of a straight port. With resources spread thin, it was time to shop for outside help.

Without knowing what they were applying for, several studios familiar with handheld development pitched potential concepts. DreamRift’s pitch was for a game in which you drew objects on the touchscreen in order to spawn them up top. The idea meshed so well with Epic Mickey‘s paint-and-thinner mechanic that Warren immediately brought the fledgling company on board. 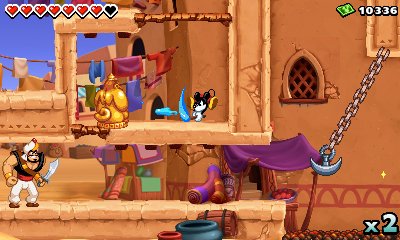 As much as I love Castle, I wondered why it was specifically chosen to be Power‘s base versus another title from the Illusion series or even from the Magical Quest series on Super Nintendo. Peter Ong’s response is perhaps the greatest thing ever:

The simple answer is a very selfish reason. Although I deeply respect and like a lot of the 16- and 8-bit platformers that came out on the Genesis and SNES from Disney, Castle of Illusion in particular is one that I hold a biased and intimate connection with, in that it was a game that, when I was a kid, I bought. And I didn’t get to buy that many games, being a kid with no income, so I was fortunate enough to buy one of the greatest games of all time and play it for half a year or more… before I REALLY became obsessed with it! That’s how long it took me before I could beat it in a day, guaranteed. And for about a year after that, I would beat the game every single day! I spent a lot of my childhood playing that game!

That there, my friends, is some straight-up Jiminy Cricket, “Wish Upon a Star” shit!

As the story goes, the evil witch Mizrabel and her Castle of Illusion have faded from people’s memory, thus both have wound up in the Wasteland. She hatches a plan to capture beloved Disney toons who still exist in the real world in order to drain them of “Heart Power,” the key to escaping the Wasteland. She alters parts of her castle to resemble these toons’ home worlds, so unlike in the first Epic Mickey, you’ll be exploring environments based on popular movies and meeting extremely familiar characters.

On an interesting note, Mizrabel on the Genesis looked similar to the Queen from Snow White and the Seven Dwarfs. Early in Power, she demonstrates the ability to assume the guise of any Disney villain, though her favorite form is that of Maleficent from Sleeping Beauty, which explains her current appearance. 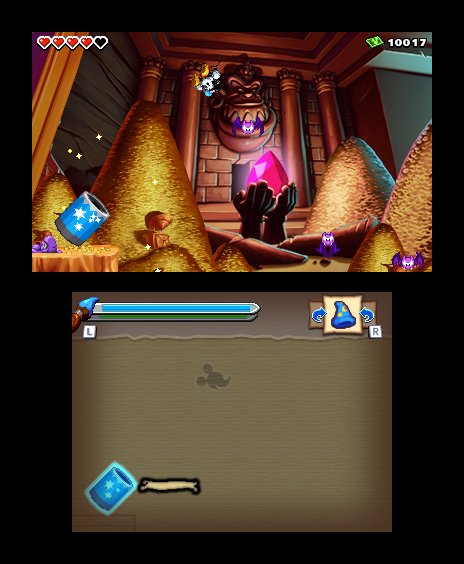 As Chad explained in his preview, the connection to Castle is quite strong. Mickey’s gait is similar, he performs the same butt stomp attack (with the same Genesis sound effect, no less!), and he encounters the same low-level mushroom critters. Best of all, the music in the opening area is an orchestral arrangement of Castle‘s forest theme! When I heard it, I let out such a mirthful laugh that one of the demonstrators walked on over to ask what was so funny!

Of course, elements from the first Epic Mickey have been incorporated, such as the spin attack, the ability to defeat enemies with paint or thinner, and E-tickets to use as currency. If you notice a shadow or a glowing object on the touchscreen, you can tap it to create or erase it on the main screen. Using the stylus, you trace the object as best as you can, and the higher your rating, the more effective the object will be and the more your special meter will fill up.

These drawing / erasing segments are my only area of concern so far. Often there will be many interactive objects you’ll have to manipulate, such as blocks that must be removed from the paths of a sequence of Mickey-launching cannons. While you doodle, the main action is paused, interrupting the game flow. Plus, it pretty much necessitates having the stylus ready at all times.

But I didn’t let that sour my experience, especially not my enjoyment of the beautiful environments with layers upon layers of parallax planes. The game is so rich and beautiful because Disney gave DreamRift access to the original movie art files! I’m talking source materials with the original animators’ notes still on them! The team could pretty much use almost anything from the Disney Vault.

Speaking of the Disney Vault… it exists! Can you believe it? I assumed it was nothing more than a marketing myth, but no! It’s a massive archive that preserves anything deemed of significance, even artists’ pencil and eraser shavings! Just thought you’d like to know! 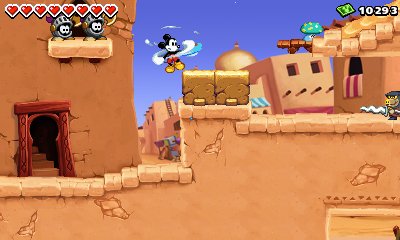 Anyway, the most prominent feature of Power — the one that Warren has always wanted to include in his games but was always forced to cut — is the Fortress, where rescued toons set up camp, hang out, and offer you quests and other goodies. Throughout your adventure, you’ll encounter characters like Goofy, Wendy Darling, Beast, Cinderella, Snow White, Rapunzel, and yes, Scrooge McDuck. In the Fortress, you can upgrade their rooms to better match an iconic scene from their original films or shows, and as you rescue them, you’ll earn “Heart Power” that Oswald can use to unlock new levels.

One other gift that rescued toons offer is their service as support characters. You can equip them as “sketches” on a pre-level loadout, then you can spawn them at any time by tracing their outline on the touchscreen. For example, when you summon Scrooge, he’ll perform the pogo bounce from DuckTales on the NES! That one earned another joyous chuckle from me!

Until now, we’ve only been exposed to the Peter Pan world, which encompasses the London skies, Neverland, Captain Hook’s Jolly Roger, and so on. For this preview, the West Wing of the castle was accessible, granting entry into the Aladdin world. You can run through the streets of Agrabah, explore the Cave of Wonders, and even meet Mr. Diamond-in-the-Rough himself.

Another cool thing I failed to mention is that these illusory worlds are in a constant state of flux. In other words, you can be strolling through the Agrabah market only to discover a dimensional fissure where pieces of the castle’s interior peek through. One minute you are hopping across quicksand, the next minute you are standing upon solid marble tiling. It’s a very nice touch. 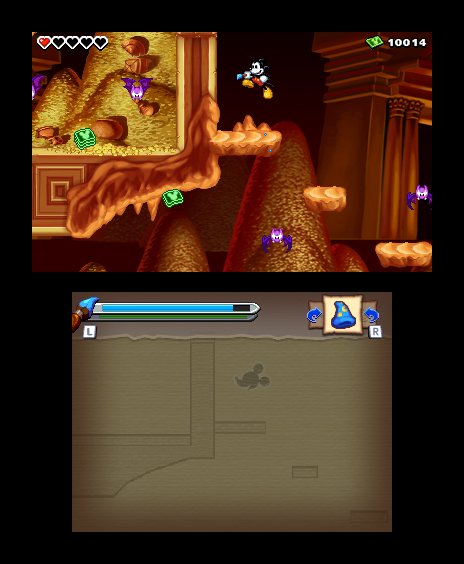 Before production began, Warren and Peter compiled a massive list of Disney elements they wanted to incorporate in the game. After Disney crossed out a few suggestions, there was still enough leftover to fill roughly 20 individual titles! The issue then became “How will we narrow our scope to meet a realistic target?” instead of “How will we make the most of our limited allowances?” That’s not a bad “problem” to have at all, plus it leaves room for a sequel! Mickey-Oswald co-op à la World of Illusion, anyone?

Aside from my concerns regarding the drawing mechanic, Disney Epic Mickey: Power of Illusion is shaping up to be a dream game in more ways than one. I say “shaping up,” but development is basically done. We’re just sitting on our hands until November 18 by this point.

I was hoping this event would temporarily sate my hunger. I was so wrong.