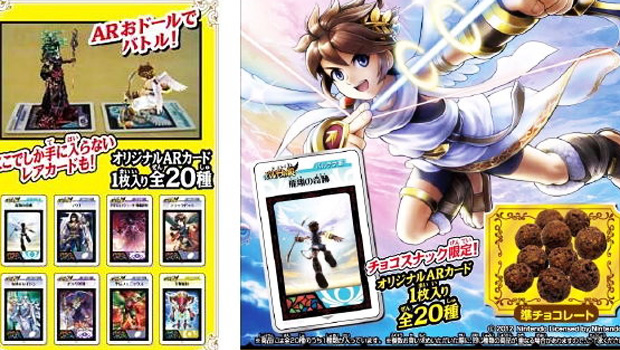 Get ready to start snacking on some Japanese treats, as there is going to some exclusive AR cards packaged in boxes of Kid Icarus: Uprising Choco Snacks. There are 20 different cards to collect, with one included in each pack. The candy itself looks like some type of chocolate puffed wheat thing, and I imagine the whole experience is pretty similar to some intense Cocoa Puffs.

Pit will make his triumphant return on March 23rd in the US and Europe to the Nintendo 3DS, and the game will include six AR cards. This is the first I’ve heard of an alternate way to get more cards, and I’m not sure if they include the ones that ship with the release. I’m excited to see Nintendo expand use of the AR card technology, as it was one of the main things to grab my attention on the handheld. At ¥100 per box, I might have to get some of these imported over here. Crunching on some chocolatey goodness has beat eating these Taco Bell boxes I’ve been suffering through in my quest for a Vita.