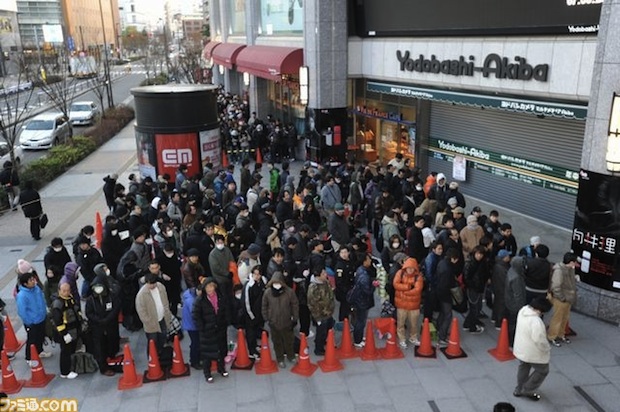 No one doubted it would happen, but we do have confirmation from Nikkei that all of Nintendo’s initial shipment of 400,000 3DS game systems have sold. One day. Gone just like that.

We called this launch day the most uneventful launch day ever. It was like that because just about all of the initial shipment was spoken for in pre-orders from over a month ago. And those pre-orders were snatched up in only a day. Stores didn’t even see walk-in traffic.

There were a few places you could line up to buy a system without a pre-order, but those were very rare. One of the largest was Akihabara’s massive monolith of electronics, Yodobashi Camera. As seen above, in a picture by Famitsu, hundreds waited outside, with walk-in traffic waiting alongside pre-order customers. In the end, 1,000 walk-in customers went home happy. This really was an isolated case, as all of the other stores we visited were strictly pre-order only traffic.

Nintendo is still planning on shipping out more to bring Japan to a total of 1.5 million systems by the end of March. Word is that some shops have opened up pre-orders again. This is probably going to go on for some time, knowing Japan.