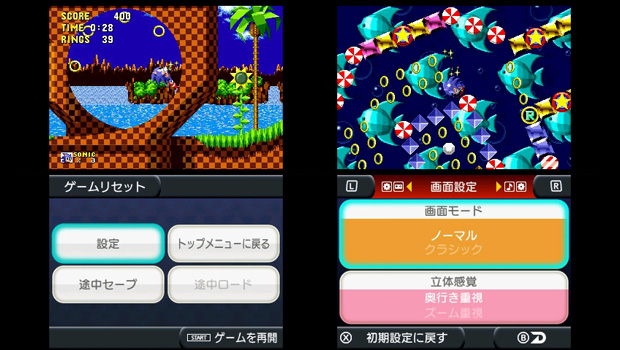 The other side of the rainbow

It’s been a while since any region outside of Japan received a new 3D Classics touch-up on the 3DS eShop. You may think that the only difference between the originals and their 3D remakes is the added stereoscopic effect, but the changes often go beyond that. For instance, Kid Icarus got colorful new backgrounds as well as the choice between classic controls and much improved ones.

Meanwhile, SEGA has been showering love on its Japanese homies with 3D updates to Super Hang-On and Space Harrier, and Sonic The Hedgehog will be joining that crew on May 15. Now, I know that ol’ Sonic gets ported and remade more times than even Super Mario Bros. — the rodent’s Genesis debut was recently overhauled for iOS, if you recall — but there are some nifty features in this 3D enhancement that give it added value.

On top of being able to remap your buttons and having the option to use the Sonic 2 spin attack, you’ll be able to switch between the Western release version and Japanese release version — the latter was adjusted to allow Sonic to remain temporarily invincible after falling on spikes and to add parallax scrolling background objects, among other minor tweaks. You can also choose between regular and CRT viewing modes as well as Genesis Model 1 and 2 audio — little known fact, but the audio qualities of all Genesis models were not equal.