We’re in a resplendent era of one-person studios and I couldn’t be happier that those kinds of games are getting attention. There’s Eric Barone of Stardew Valley fame, Celeste‘s Matt Thorson, Bertil Hörberg, and of course, Brian Provinciano, who gave us the GTA-inspired (the original GTA) Retro City Rampage, among many others.

You can add Provinciano’s follow-up, Shakedown: Hawaii, to that lengthy list of successes above. 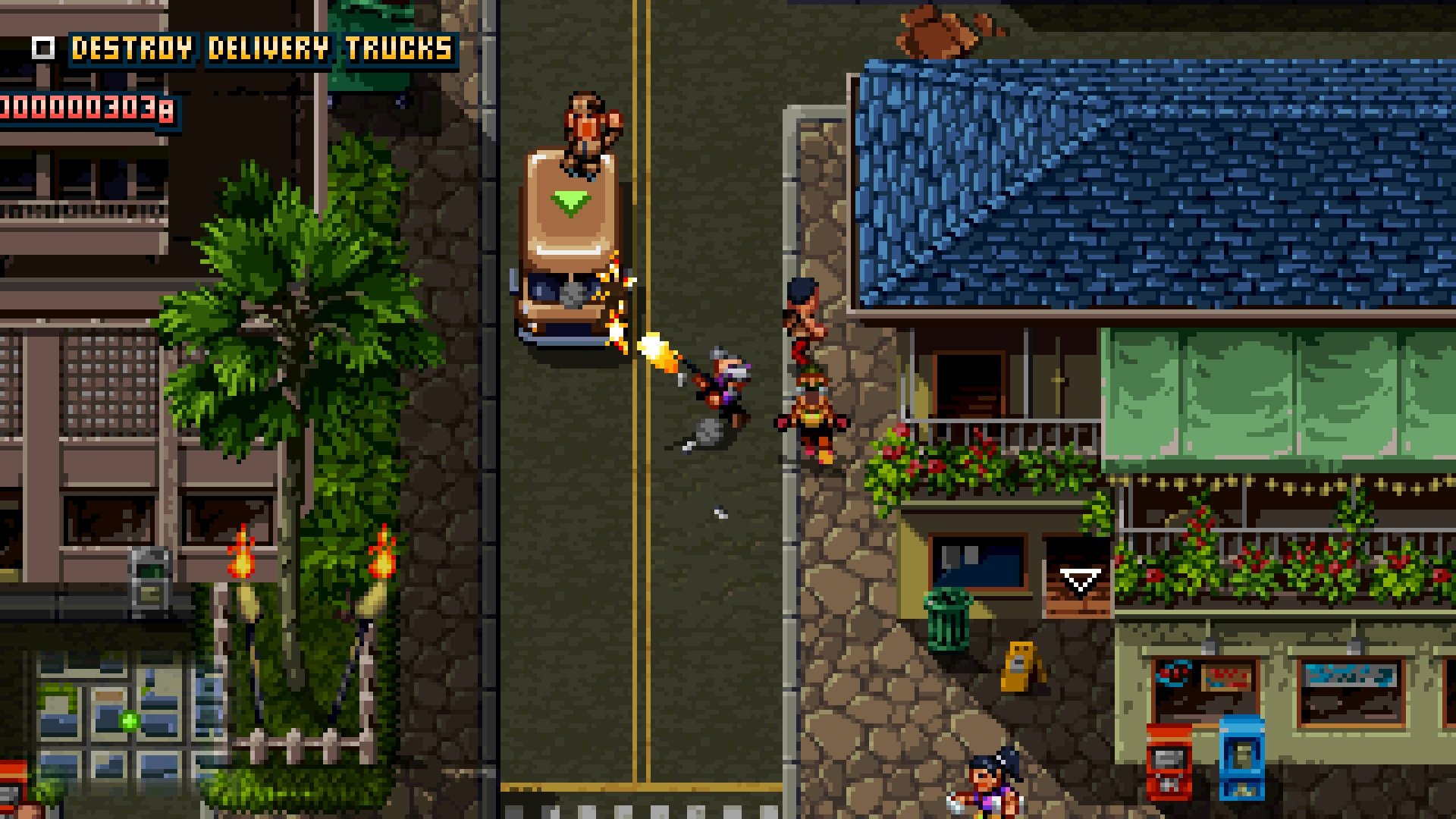 Shakedown opens with a different kind of “hero”: an aging, balding, out-of-touch man having a breakdown. As the CEO of an old media-oriented business declares “streaming a fad,” his video rental stores and other over-the-top Blockbuster-esque models are no longer cutting it. As always in the video game world, crime pays.

Thematically it’s a bit different compared to Retro City Rampage. There aren’t entire missions dedicated to Batman villain Joker or myriad pop culture references thrown in your face. In fact, there aren’t a lot of direct references at all, as the creator wanted to have Shakedown stand on its own more than its predecessor. It’s more social commentary (“I’ll get you a spit bucket” for when you toss back a gamer energy drink for a TV commercial), and fewer memes (if that bothered you in the first place; I thought it actually fit). Watching the oafish lead get thwarted constantly is another treat.

The setting is altered for the better. Hawaii makes for one killer location, with plenty of water motifs to take advantage of on top of the lush, beautiful vegetation. Brian makes this world feel alive despite the old-school feel, with swaying trees and vibrant visuals, and it all looks fantastic on Vita (hell yes, one of the last Vita games). Brian didn’t do everything alone: amid the great work by many other designers, the soundtrack slaps. Matt “Norrin Radd” Creamer’s soundtrack is restrained yet delightful, with a synthwave focus that isn’t cloying or, again, too referential.

Shakedown‘s overworld is approximately three times bigger than Retro City and it shows. This is the kind of free-spirited experience where you can roam around randomly and do whatever you want (and you can, as “free roam mode” returns!) and not get bored during short sessions, or opt for more lengthy goal-oriented playthroughs as you work through the campaign and side missions. Not every bit of the map is utilized to its fullest, but it does have less of a sense of déjà vu than Retro City due to the aforementioned aesthetic makeover.

I think what I dig most about Shakedown is the relaxed emphasis on doing whatever you want. Based on how many business you shake down (or retail/investment properties you acquire) you’ll net an income, which kind of just pops up periodically on-screen as a bonus. At that point you can keep blowing stuff up, go tackle a story mission, or buy another property in a few seconds by bringing up the world map and selecting it. Other Crazy Taxi-style minigames pop up, like “destroy the [basically Amazon Prime] delivery truck” or “repossess cars whose owners are overdue on their payments.”

A typical AAA studio move would be to force all of these things to move at a snail’s pace; requiring players to manually go to the building to purchase it amid lengthy load times. But with Shakedown you just casually select it from a menu and start raking in cash, then resume your regularly scheduled activities like using a machinegun during a speedboat chase. This is probably the only game where you can hijack cars on the search for the next big superfood to market to hapless consumers through sponsored advertising. Plus, my immediate thought after scaling up my business was “man now I can pay myself a bigger salary!” So I’d say they nailed it.

Speaking of blowing stuff up, combat is arcadey and functional, albeit with a few annoyances. Being able to freely shoot in any direction with a twin-stick setup is great, as is the Mario jump-and-stomp attack that you always have at your disposal, but the lock-on system can be finicky, often swapping or choosing targets seemingly on a whim. Things get even dicier when you’re in a vehicle.

With that in mind, vehicles (which you’ll be spending most of your time in) control like a dream. Input is seamless, with the power to stop on a dime and move about in any direction instantaneously, while still maintaining some semblance of a physics system that makes sense. Since you can break nearly every object in the game beyond solid walls, driving is also never frustrating. 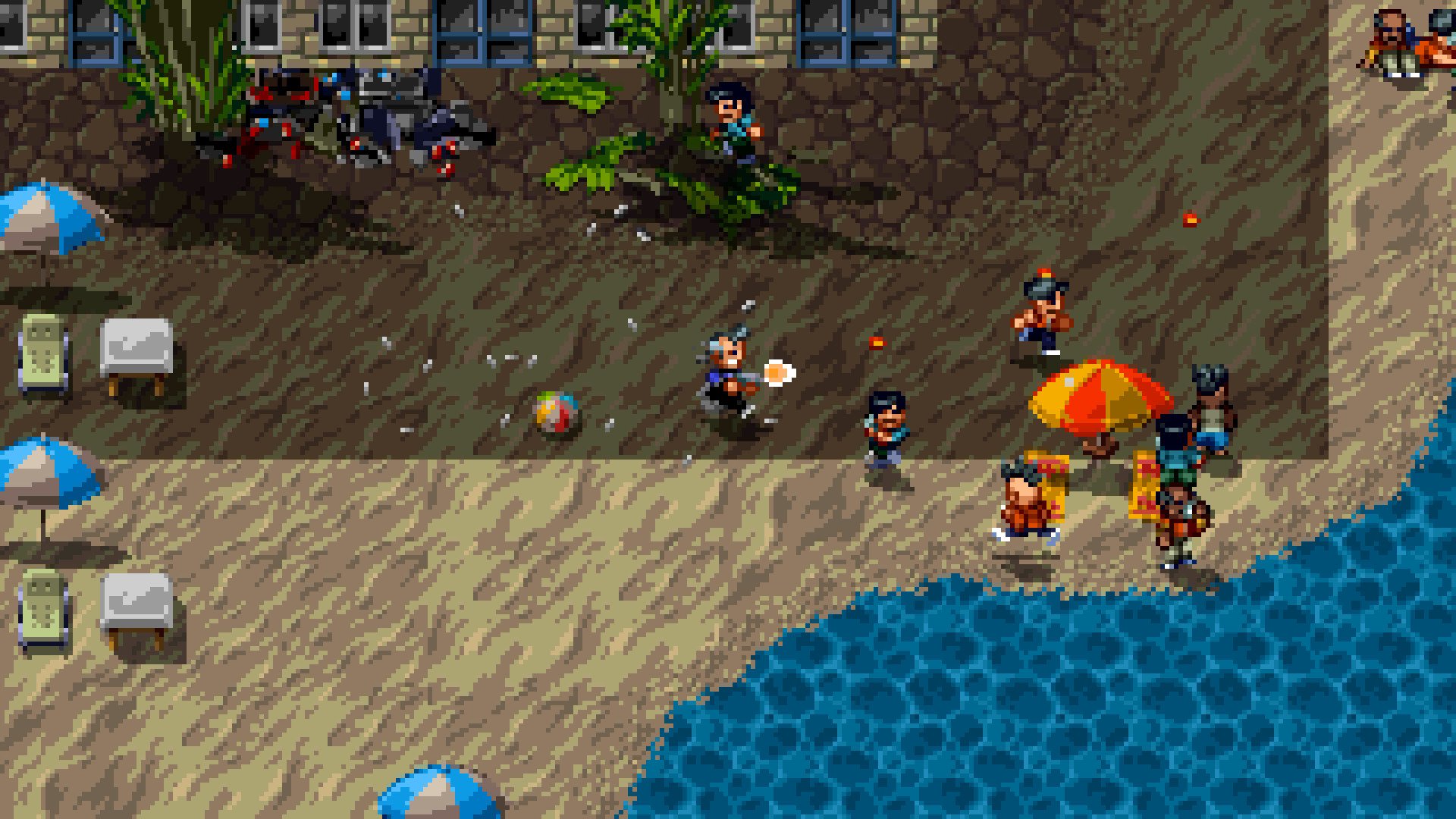 Yet, as I made my way through Shakedown‘s story, I was a bit conflicted. I don’t think the tritagonist focus (you play as the CEO’s son and the company’s main Winston Wolf fixer) really serves the narrative, nor does it make a meaningful statement against, say, GTA V‘s usage of the same conceit. I found many of the forced swaps to be a momentary pain.

The characters all sport the same controls and abilities, and when I did have the choice to swap manually, I mostly just found myself playing as the CEO as he is the crux of the tale. Small little glitches (that take 10 seconds of time, at most, due to the hefty amount of checkpoints and fast pace) also pop up every so often and force a mission restart.

It’s a small price to pay for low-stakes arcade open world antics. Shakedown: Hawaii might play similarly to Retro City Rampage, but it takes place in a markedly different world. It’s more than enough to warrant giving both games a shot, and a worthy successor to a now-seven-year-old adventure.