It was one of the more peculiar announcements made during the last Nintendo Direct. The 3DS, a console many believe is already on its way out the door, is getting the biggest game in the world with the New Nintendo 3DS edition of Minecraft. After years of imitators on the handheld, owners of the dual screen sensation will finally have their chance to experience the phenomenon.

But is it too late? 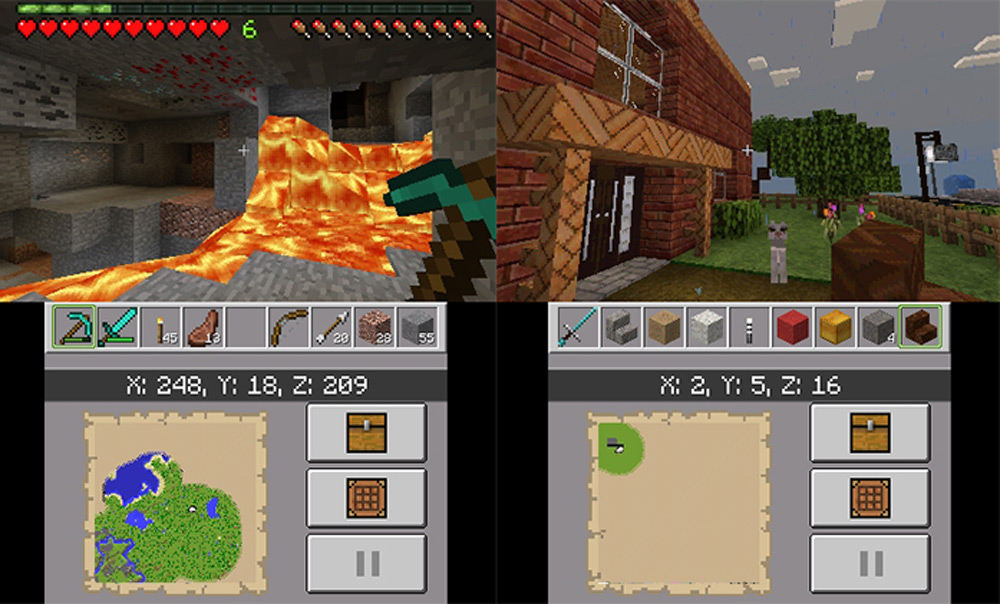 I suppose it is pointless in 2017 to discuss the finer points of Minecraft‘s gameplay. With more than 120 million copies sold, chances are everyone who will read this brief review has already tried it and decided whether they love it or hate it. I can enjoy Minecraft, I just don’t like it on my 3DS.

Minecraft: New Nintendo 3DS Edition is roughly equivalent to Minecraft Pocket Edition Alpha 0.15.4. That update, which launched last year for mobile, brought with it fixes for stability and a villains skin pack. That skin pack is not included on the 3DS and is just one of several features missing here. As of the time of this review, there is no local or online multiplayer. The former has been promised to come in an update while the latter is up in the air. There are none of those cool Nintendo exclusive skins that launched alongside the Wii U and Switch versions. There also is no 3D, another feature possibly on its way through an update.

What is here are the very basics of Minecraft: survival mode & creative mode, as well as a few uninteresting skin and texture packs. Maps here are bigger than those found on the Wii U edition but with a poor field of vision, I don’t see very much of it at one time. The fog of the game reminds me greatly of the Nintendo 64 classic Turok and makes my many spelunking trips into an endless number of underground dead ends a bit more nerve-wracking. I guess that is one of the sacrifices that is made to make it work on the New 3DS hardware. There are also framerate issues, enemies attacking me even when they are facing the opposite direction, broken water physics, and game crashes to watch out for.

I do generally like the controls even if they do feel like a PC design poorly shoehorned onto a classic controller set-up. Early in the game, I have a few issues not being able to line the reticule exactly on the target, but 12 hours in that isn’t a problem anymore. The touchscreen does help with inventory management and both screens used in tandem simplifies crafting and cooking tasks.

Not everything with the two screens works as well as it should though. There is a map that is always present, but it will only show a single quadrant at a time, will occasionally blank out and doesn’t allow me to put any markers on it so I can find my way back to my house should I get lost. It’s also tiny, won’t zoom out and does a crap job of showing what the actual terrain looks like beyond letting me know whether it’s grass, desert, snow or water.

When emptying my pockets into chests I build, I have to have the empty slot actually showing on the screen for the system to recognize its existence. Chests have 27 slots, but only 15 show on the screen at once. So If I don’t physically scroll down on the touch screen I can’t empty items into the chest, even when I use the Quick Move button. I get that sounds nitpicky, but it’s just another example of how undercooked this version is.

The title of “New Nintendo 3DS Edition” is a misnomer as there is nothing here that makes this edition any more special than those already available. And now that we know it will not be included in the Better Together cross-play campaign, it almost feels dead on arrival. There is a chance, down the line, Minecraft: New Nintendo 3DS Edition will actually be worth its asking price, but that time is not now.