Rather finite, but fun

With the success of Skylanders and Skylanders Giants, it was inevitable that someone would challenge the concept of marrying toys to videogames on such a large scale. So what better company than the juggernaut that is Disney, who was able to sink $100 million dollars into research and development for the project, titled Disney Infinity.

But Disney Infinity isn’t exactly the same as Skylanders beyond the concept of toys as DLC. They’re fairly different games — for better, and for worse. 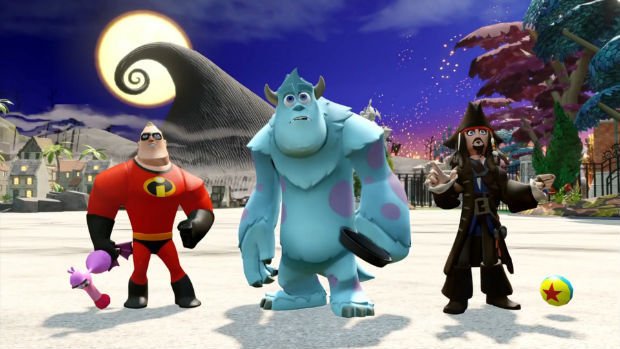 In order to get started with Disney Infinity, straight-up, you’re going to need to purchase the Starter Pack just like Skylanders (ouch!). It’ll net you an Infinity Base that plugs into your system via USB, three figures in the form of Jack Sparrow (Pirates of the Caribbean), Sulley (Monsters University), and Mr. Incredible (The Incredibles), plus a hexagonal Play Set piece that includes a separate campaign for all three of these IPs — which I’ll explain in a bit.

The toys themselves are extremely high quality, and a step up from the Skylanders figures as they’re taller, generally larger, and made of tougher material that doesn’t feel flimsy. They’re non-articulated which is a bummer, and the base is rather large, but I don’t feel like I could break them by stepping on them or dropping them, and they stand up perfectly on just about any surface. Just like Skylanders, information for each piece is hard-coded in the base itself, and you can travel with your characters and keep your level progress. Alternatively, you can have a friend buy the game for the Play Sets, and just buy a character to use yourself; you can also use them on any platform.

So what can you actually do with these toys? Well, you place them on the Infinity Base to jump into a Play Set, which is a fully-featured world themed after Pirates, Monsters, or The Incredibles. Pirates will take place in a world full of swashbuckling ne’er-do-wells and the high seas, Monsters University is set on the titular university grounds, and The Incredibles world features the GTA-like city of Metroville. All of them operate in the same manner, playing out a narrative similar to the films in non-linear mid-sized sandboxes.

Not all sets are created equal though, as the Monsters and Pirates Play Sets in particular aren’t nearly as engaging as The Incredibles. While Metroville is a joy to explore, topping LEGO City Undercover‘s Lego City in terms of personality and fun-factor, the University and the high seas pale in comparison. The academia-heavy Monsters Play Set feels like a mid-tier Tony Hawk level at times, leading you to mundane tasks like cleaning up toilet paper attacks from rival college Fear Tech. Similarly, getting around by way of ship-travel can be a bit of a bore in Pirates, especially compared to the Helicopter- and Hoverboard-heavy Incredibles Play Set.

With simple one-button attacks and at most a few abilities at your disposal, if I had to compare the gameplay to anything, it would be the LEGO games. You know by now whether you’re the target audience, and if you can’t seem to “get” them, you’d probably be better off staying away from Disney Infinity. But for the rest of us who don’t mind easy-going mechanics from time to time, it’s actually quite enjoyable. Each of the starter worlds has a roughly three-hour core campaign, with tons of content packed in all three like side-missions, story quests, and hidden collectibles that will push you far past the three-hour mark.

For the purposes of this review, I purchased an additional $30 pack to augment the starter edition that came with the following characters: Davy Jones (Pirates), Randy (Monsters University), and Syndrome (Incredibles). You may notice that the IPs of these three characters match up with the starter kit — that’s because in order to play co-op between worlds, you need two characters from the same universe — for example, Jack Sparrow and Davy Jones. 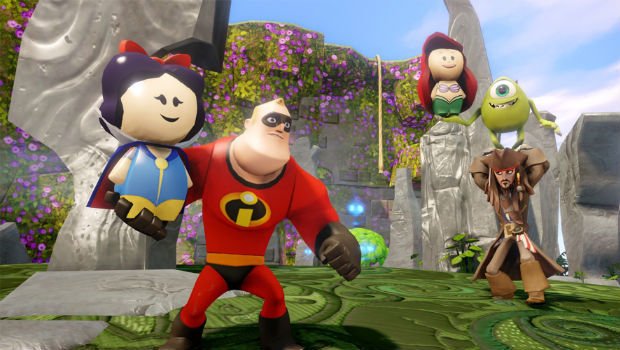 The concept behind this according to Disney (beyond the obvious monetary reasons, shhh) is that each world is a separate contained experience, and having Mr. Incredible running around in the Pirates world would feel weird. The good news is split-screen co-op is a treat, as it allows each player to roam around the world freely, doing anything they wish without tethering people together on the same bit of TV real-estate.

To test how far I could take it, my wife and I tried a ton of co-op together and had a pretty great time. There weren’t very many limits at all. At one point I was in one area in the Incredibles city doing core missions, and she was in a completely different part looking for collectibles and saving the local Zoo. Whenever we felt like joining up for quests, we just followed the compass to the meet-up spot. It’s a bit weird to play as Syndrome (the villain in The Incredibles) and see him causing havoc to the town in the story bits, but I’m willing to put up with it if the alternative is not being able to choose the character I want.

So those three aforementioned worlds I talked about above? That’s all you get with the Starter Pack. If you want additional game worlds (there are currently two extras right now — Cars and The Lone Ranger), you’re going to have to purchase a seperate Play Set, which comes with two characters (allowing co-op, inherently), and the hexagonal base that comes with the levels. 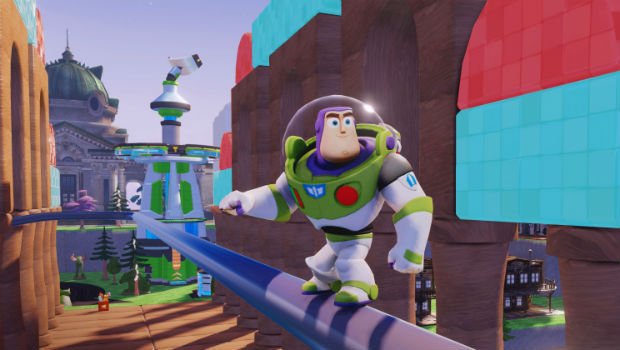 In other words, think of it as really expensive DLC that nets you approximately another three hours of gameplay. Power Discs are another concern, as they’re sold in blind packs, and net you additional content and bonuses by placing them under your physical toys on the base. Thankfully, most of these extras are small in nature or cosmetic, and can be ignored — especially the stat boosts, which you absolutely don’t need to beat the game.

Now, this model would really turn me off if it weren’t for the Toy Box, which is included in the base game and is extremely well done. Essentially, it’s a completely separate mode that allows you to create your own world and setup a number of different objects from various Disney IPs like Scrooge McDuck’s Moneybin, ESPN sports-themed equipment (yes, Disney owns ESPN!) and actual rides from Disney parks. If you want, you can queue up a race track and play with Cars characters, or create vehicles and animals to ride for characters with legs.

This is where all the good classic IPs like Alice in Wonderland are hiding, and you can set up your town with hundreds of items from just about every major Disney film, from Robin Hood to Beauty and the Beast. Toy Box is really open-ended, and online play with the ability to submit and share levels online is a plus. It’s one part Minecraft-lite, one part LittleBigPlanet, and the tools provided are fairly robust, easy to understand, and enjoyable to play with. If you’re the kind of gamer who hates creating things though, you’ll quickly run out of things to do in the Toy Box. 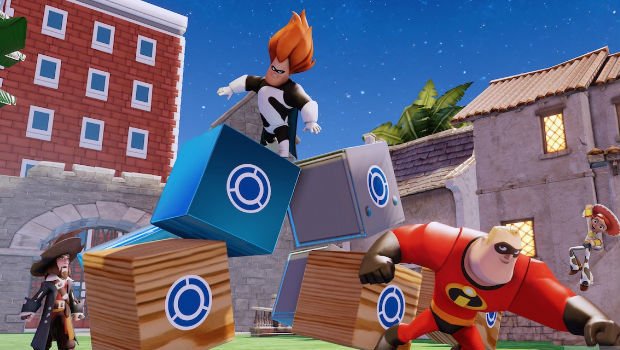 There are a few extra modes to play around in besides Play Sets and the Toy Box, including other downloadable Box worlds, the Hall of Heroes (that lets you view all of your collected content, and morphs as you level up), and one challenge that’s unique to each character. But beyond the game’s modes, I can’t help but feel like the initial cast of character should have been a lot stronger. For instance, there are a lot of Pixar properties that are playable, but very few classic Disney movies are represented beyond a few small NPC references.

While I haven’t purchased the Lone Ranger Play Set yet to test the actual quality of the sandbox, one has to wonder about the actual appeal of said IP in the grand scheme of things, and why Johnny Depp’s likeness had to be in the game not once, but twice. Heavy-hitters like Toy Story, Wreck-It-Ralph and Phineas and Ferb are due to arrive later this year, but not at launch. Coming in with a bang with Star Wars– or Marvel-related properties would have made Infinity a must-buy, but as it stands, you really need to like Disney and Pixar to get into the launch cast.

I can see the potential with Disney Infinity both within its future playset opportunities and the Toy Box, but it’s not quite at a “must buy” status just yet. By the same token, I had a ton of fun playing the game, especially with a local co-op partner on-hand. So long as you’re willing to put up with some rather elementary action gameplay, Disney Infinity is a solid choice for families, younger gamers, and gamers who are young at heart alike.