You don’t make up for your sins in church, you do it in the streets

It was a long wait, but it proved completely worth it. We knew it was going to be good, and it still exceeded expectations. Following a hiatus of two decades plus, Sega’s iconic ’90s brawler Streets of Rage finally returned in 2020, sporting a brand new look, an instantly recognizable sound, and the same button-pounding, face-smashing action that had entertained many a Sega Genesis owner in one of gaming’s most golden eras.

A passion project of developers DotEmu, Guard Crush Games, and Lizardcube, Streets of Rage 4 absolutely delivered on all levels, offering a great-looking, great-sounding, and compelling gameplay experience. It was like the franchise had never left. And the key to this fantastic release lies in one word: Evolution. While Streets of Rage 4 undoubtedly felt like a genuine series sequel, the dev team ensured that it brought new depth, quality, and longevity befitting a 2020 release.

And with today’s launch of the Mr. X Nightmare DLC, the trio of studios once again finds ways to reinvent one of the oldest wheels in gaming, further blending the repetitive combat of the brawler genre with the finesse, style, and expertise on a top-tier one-on-one fighter. Sporting new characters, new modes, new music, new moves, and much more, the Mr. X Nightmare DLC brings incredibly welcome additions to SoR 4. Better yet, it evolves the title beyond its already splendid status.

Perhaps the main draw of Mr. X Nightmare, for many, will be the addition of three new characters, all of whom felt oddly conspicuous by their absence in the original release. Leading the charge is my personal fave: powerhouse cop Estel Aguirre, who has seen the corruption driving Oak Wood City’s police force and has turned her Krav Maga skills and those shoulders to the side of our vigilante force. Estel utilizes a crunchy MMA combat style, complete with Superman Punches and ground-and-pound takedowns, while also utilizing crowd control weaponry for when things get too close for comfort. Estel does not dash, but makes up for her lack of speed in raw punching power, while her double-leg takedown covers a lot of distance.

Returning from the roster of Streets of Rage 2 is former pro-wrestler Max Thunder, who was kicked out of the business for “refusing to throw a fight”. I love the ’90s. Old-school Max heads will be pleased to hear that his knuckle bomb, dropkick, front choke, and German Suplex are all present and correct, (although his previously devastating Atomic Drop from SoR 2 isn’t quite as OP as it was in the original). Max also cannot dash, but does retain his classic rolling shoulder charge which, again, helps the meathead cover a lot of ground quickly.

The final character is ex-bad boy Shiva, who has turned from his life of crime to the solemn teachings of Buddist philosophy. Shiva is an excellent character and may prove to be one of the game’s S-tier protagonists. Shiva has a selection of beautiful-looking martial arts maneuvers at his disposal, as well as game-best agility. Equipped with a dash so fast he almost cuts the air, as well as an air dash, Shiva can skip around the arena better than perhaps any other roster member. In a wonderful touch, Shiva despises weapons and as such he cannot hold them, but he can kick-flip them off the ground before sending them hurtling toward the enemy. It’s an incredibly satisfying tactic. 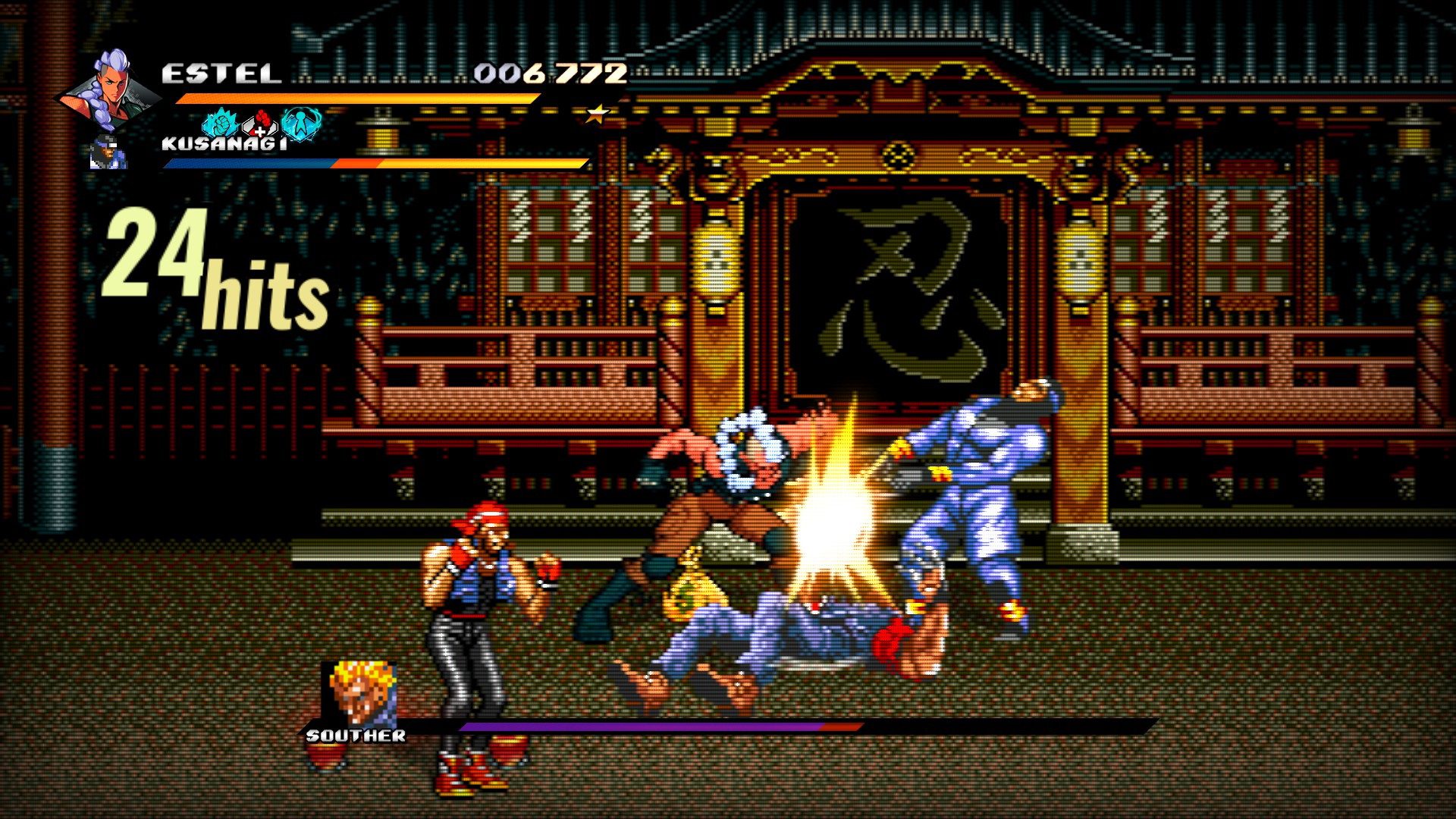 The second major addition in Mr X. Nightmare is the titular Survival Mode, in which we find our heroes stepping inside a Holodeck-style VR machine, constructed by SoR 3′s Dr. Zan. In this mode, Up to four players take on a host of villains pulled from the entire Streets of Rage franchise, (‘member that clown with the whip?), facing off with the bad dudes in a variety of virtual arenas. Electrified wrestling rings, abandoned factories, even a quick trip to the dawn of time — players will take on round after round of increasingly difficult enemies, armed with a single life, on-site weaponry, and a variety of buffs and effects that can be applied at the end of each round. All of the ensuing chaos is backed with an expanded soundtrack, featuring a selection of great new tracks from Sonic Mania composer Tee Lopes.

For those who have all but wrung the Arcade Mode dry, Survival Mode hopes to be the long-term replacement, offering scaling difficulties, unlockable artwork, and bonuses for each and every playable character, including the old-school iterations of Axel and chums. Survival Mode also facilitates perhaps the most low-key but the biggest addition to Mr. X Nightmare: Fully unlockable and customisable movesets.

As players progress through the Survival Mode, they will unlock new moves for every character in the game. That’s new dash attacks and specials. Once unlocked, players can switch these moves in and out for every mode in Streets of Rage 4. Essentially, players will have the opportunity to build their own custom special/dash moveset for their favorite characters, opening up the incredible potential for new combos and strategies. This is a fantastic addition to the depth and longevity of SoR 4. Not only can you now fine-tune your playstyle with your best bro/gal, but you can also master combos facilitated by your own bespoke moveset. That’s fucking awesome. Another testament to the developer’s wise decision to design SoR 4 as a fighting game, as opposed to a straight brawler (in before “Why Can’t Axel Dash?”) 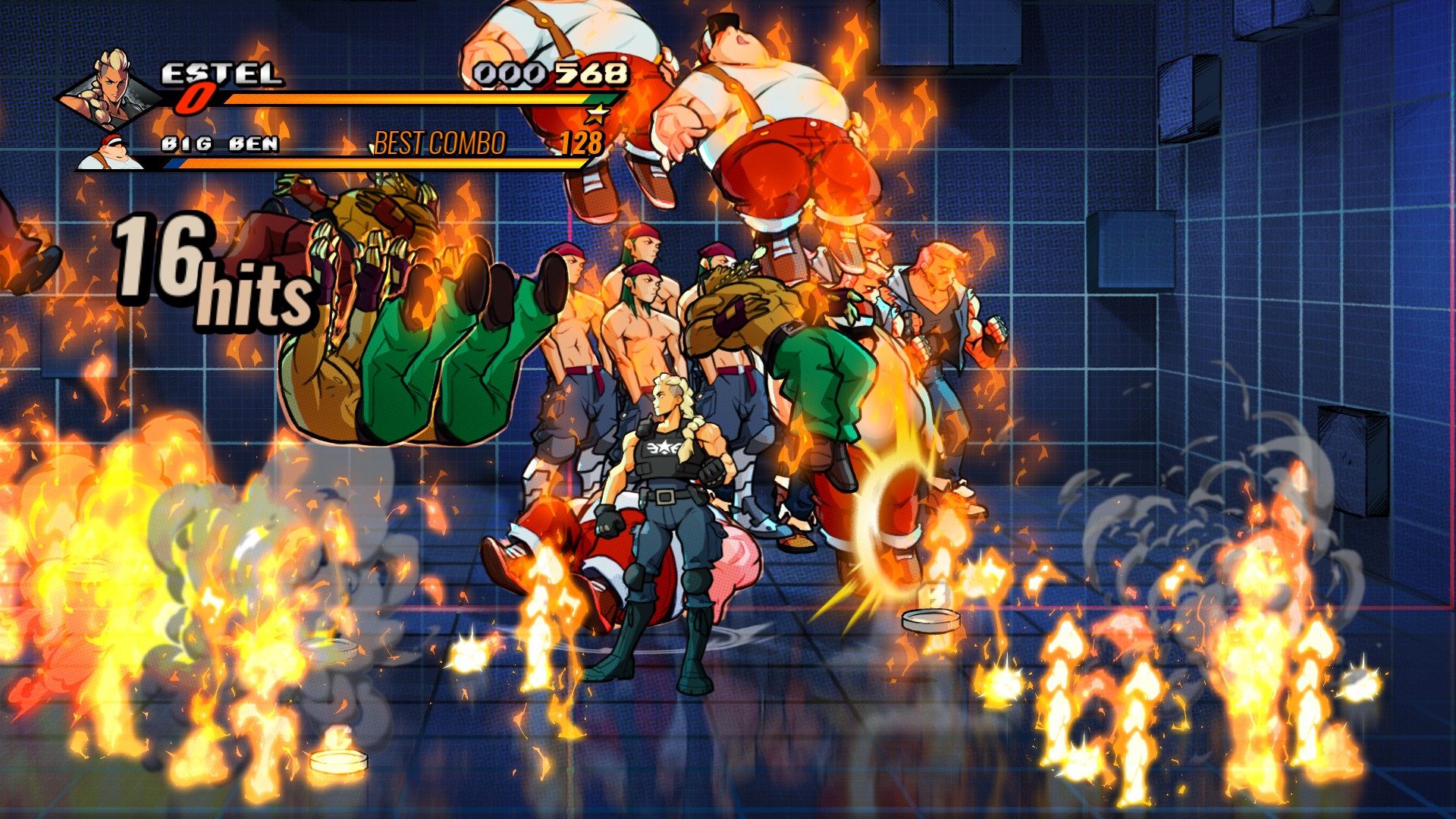 Today also brings a free update for all players, which adds an in-depth Training Mode, perfect for honing your justice-bringing beatdowns skills. The mode features almost all of the features you’d expect in a training mode for, say, Street Fighter, and even allows you to select any villains in the game, in almost any number, and choose exactly where to place them on the playing area, thus creating the perfect situational offensive and defensive tactics. For die-hard SoR 4 fans, the mode will eat up hours of your time. Also included in the update are a newly written tutorial, a selection of cool palette swaps for the roster, and the challenging “Mania+” difficulty setting, increasing enemy speed, frequency, and damage, dropping your chosen hero with a few cheeky few slaps. Ow.

The Mr. X Nightmare DLC retails for $7.99, a modest price for three hand-animated characters, an expanded soundtrack, two new modes, and the customisable moveset option — a feature that practically reinvents the game. While many fighting titles would offer a single DLC character for a similar price, the affordable eight buck price tag is just the final cherry (Hunter) on the cake, making Mr. X Nightmare an absolute must-have for each and every SoR 4 player.

The Streets of Rage 4: Mr. X Nightmare DLC is an absolute no-brainer. This quality expansion offers three excellent and unique characters, a compelling Survival Mode, and greater gameplay depth for a modest fee. Meanwhile, the free update adds a brilliant training tool for those who have adopted SoR 4 as a regular haunt and offers an increased challenge for the most hardened of street sluggers. Simply put, one of the best brawlers ever made has just gotten even better.

We’re just one Roo away from perfection…

[These impressions are based on a retail build of the DLC provided by the publisher.]