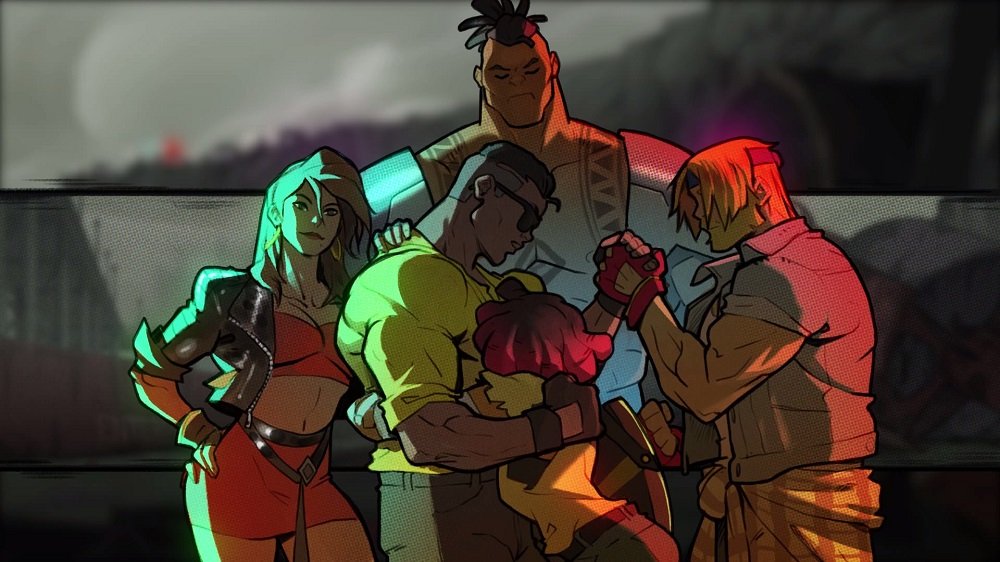 It’s been 10 years since the events of Streets of Rage 3, and Oak Wood City is only mildly safer than it once was. Having left the police force decades ago to embark on their tax-break vigilante careers, Axel Stone and Blaze Fielding have since retired from this hazardous moonlighting gig to live relatively normal, mundane lives.

But you know what never retires? Evil. And now the downtrodden metropolis faces a new threat in the form of the mysterious “Y” siblings: two privileged young psychopaths who are bringing death and destruction back to Oak Wood’s rain-stained alleyways. With local law enforcement on the syndicate’s payroll, there remains but one option: Axel and Blaze, accompanied by allies old and new, must return to the mean streets and rescue the burned-out ‘berg the only way they know how: at the business end of a broken bottle.

Over 25 years since its last official entry, Streets of Rage is finally ready to make its long-awaited, highly anticipated return. The 16-bit era was an entire lifetime ago, and action games have advanced far beyond the traditional arcade brawlers of yore – is there even a place for Blaze and crew in the modern gaming age? You bet there is, Jack.

While on paper, a three-team development alliance could spell disaster, it becomes clear from the opening minutes that each party’s individual talents have combined in perfect synergy. Almost every single element of Streets of Rage 4 excels, thanks in no small part to the respective experience and knowledge that each team brought to the table.

SoR 4‘s gameplay consists of striding defiantly through 12 downtown locations, mashing the ever-loving fuck out of everybody who stands in front of you. Our heroes will brawl their way through the slums, bars, junkyards, trainyards, sewers, and… erm… art galleries of Oak Wood City, engaging in bone-breaking, drop-kicking, table-smashing, apple-eating mayhem. When everyone else is dead, you’re the best. Any questions?

Each character has a distinct fighting style, bringing their own very particular set of skills to the ruckus. Axel’s attacks multi-hit. Blaze can utilise weapons in combos. Adam can slip in-and-out of danger, switching sides with his opponent, while his daughter Cherry is blessed with both dash attacks and other acrobatic abilities. Floyd is the resident chunk ‘o’ meat, breaking fools with devastating throws that would leave Bane saying “Ease up, mate.”

SoR fans will be ecstatic to see the return of classic moves such as Blaze’s Kikoushou and Axel’s Grand Upper, as well as the series’ traditional cartwheels, suplexes, judo throws, break-falls, and sneaky back attacks. As smoothly executed as ever, with an easygoing control system, these familiar attacks and exciting new super-moves will leave long-timers squealing with delight.

Where the sequel really comes into its own is with its free-flowing combo dynamic, akin to that of a typical fighting game. Each character can chain together normals, specials, weapon attacks, and throws to create extended combos. Specials cost health, so a risk/reward system asks you to gamble damage against your own life bar. This smart mechanic encourages variety in battle, with long chains of consecutive hits scoring major bonuses. Think Rock Band, but with more punctured lungs. Add in juggles, wall-rebounds, and environmental damage, and you got yourself a recipe for mayhem.

Accompanying the main campaign are three side-modes. Battle Mode pits characters against one other in free-for-all combat, Boss Rush lets you take on SoR’s biggest and baddest in survival action, and Arcade Mode tasks hardened players with taking on the entire game in a single sitting, without continues. No easy feat. SoR 4 features five difficulty levels, supporting four players in local multiplayer and two players online. I haven’t been able to have marathon online sessions but the experience I have had (on PC) was crisp, low on latency, and very enjoyable.

Lizardcube has outdone itself in regards to Streets of Rage 4‘s visuals. The sequel is dripping with style and attitude. Series devotees will be thrilled upon seeing the SoR rogues’ gallery redesigns, offering new looks to classic scumbags Y Signal, Diamond, Fog, and everybody’s favourite Poison rip-off: Nora. Meanwhile, a handful of brand new characters – including the awesome combat cop Estel Aguirre – threaten to steal the spotlight entirely. Ah’m beggin’ ya to make her playable, devs.

Lizardcube’s talents are also showcased in the modern realisation of Oak Wood City, which dazzles with its intricate detailing and reflective light, shadow, and weather effects. The grimy and dangerous world of Streets of Rage 4 is both brand new and immediately familiar at one and the same time.

It would be criminal not to address the soundtrack, to some fans the spine of the Streets of Rage saga. SoR 4 boasts a great modern-retro score. Each stage utilises multiple tracks, punctuating every jaw-crushing blow with nightclub-heavy beats and ’90s rave piano samples. While original composer Yuzo Koshiro’s contributions are minor, a host of new talent steps up to capture that SoR spirit. Besides, if you really want Koshiro’s magic, you can switch out the OST for the classic 16-bit scores at will.

Streets of Rage 4 does have a few disappointments, that seem to pertain to circumstance, rather than design. Though the campaign includes brief cutscenes, the story lacks a satisfying conclusion, simply cutting to credits and splash art, which is a little anti-climatic. It’s great to see the inclusion of retro characters Skate, Max, Shiva, and Dr. Zan, but SoR 3’s Roo seems to be M.I.A entirely. A few boss characters get recycled in later stages, despite the catalogue of classic SoR villains to call upon and, oddly, the two-year old teaser trailer now serves as the game’s intro.

It could be speculated that the project ran out of time, money, or both. It would be understandable, hand animation is a very lengthy, expensive process. But as the dev team has worked with such dedication to deliver a complete experience with SoR 4, these minor omissions are conspicuous. As stated, however, these are mere disappointments, not deal-breakers.

All developers care for their IPs, and undoubtedly want their games to be a success, but when a developer is truly smitten with its work, it manifests itself in the final product. Dotemu, Lizardcube, and Guard Crush Games clearly love Streets of Rage. There isn’t an element of Streets of Rage 4 that showcases the team at anything less than their best. A love letter to both the brand and its audience, SoR 4 is the most passionately “personal” video game I’ve played in a long time.

It’s almost impossible to imagine a Streets of Rage devotee not being delighted with this sequel. It has the depth of combat and variance of character for dedicated fans to sink their teeth into, while its chaotic “quick-fix” action and co-op multiplayer offers even the most casual enthusiast a solid experience. While it may suffer longevity issues inherent to the genre. SoR 4‘s gratifying gameplay and fair price tag make this a purchase worth anyone’s cash.

Streets of Rage 4 is an absolute triumph. It looks stunning, it sounds sublime, and it plays like a dream. SoR 4 delivers fistfuls of knock-down, drag-out action for fans old and new, all at a modest price. It’s been a long wait for the Streets of Rage faithful, but comebacks rarely get much better than this. GRAND UPPAH!