Square Enix isn’t shy about a Final Fantasy spin-off, always ready to milk the franchise a little more in the name of nostalgia and profit. It is surprising, then, that it’s taken the publisher so long to exploit one of the most iconic elements of the series — its music. That Square Enix didn’t seize upon the idea of a Final Fantasy rhythm game sooner is nothing short of miraculous.

Of course, all ideas are obvious in hindsight, and most of them sound pretty damn great on paper. The final product needs more than a few bright concepts to see it through. 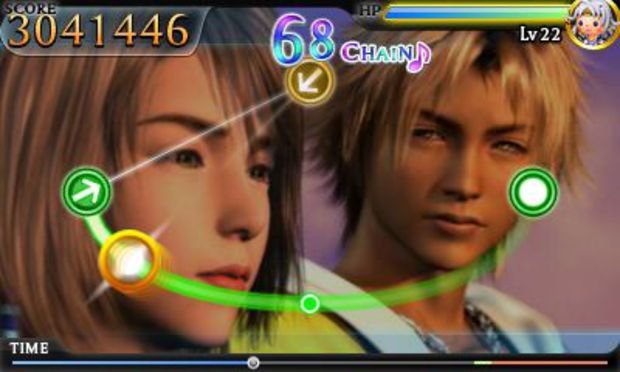 Theatrhythm Final Fantasy pilfers from some of the most beloved soundtracks in videogame history to create a tribute to the music that has brought thirteen games to life. Starting with the very first Final Fantasy released in 1987 right up to 2009’s Final Fantasy XIII, every current main installment in the franchise has been accounted for. Most of them appear in their original context, too, complete with whatever glorified MIDI sounds or full orchestras they may bring to the table.

There is a loosely defined plot that involves a battle between Order and Chaos, as the player is charged with collecting “Rhythmia” as a reward for successfully completing challenges. Yes, the same waffling plot details and pretentiously invented words that infest latter-day Final Fantasy are present, though the story is left (thankfully) light. The aim of the game is simply to keep playing it until you’ve gathered enough Rhythmia, automatically unlocking a final track that serves as a battle against Chaos himself.

The game is started by creating a party of four characters, made up of protagonists from each of the Final Fantasy chapters (though supporting cast members can be unlocked through play). Each character has a unique set of stats that are useful for different songs, and can be equipped with abilities or items that may help the player out during a song such as avoiding losing health for failure, getting rarer items, etcetera. As the party gains levels, their stats improve and they access new abilities, which can be crucial when taking on trickier tunes.

There are three modes of play: Series, Challenge, and Chaos Shrine. Series mode takes three tracks from each Final Fantasy game and tasks the player with completing them sequentially, while Challenge is a “free play” mode which allows the songs beaten in Series to be replayed at higher difficulty levels. Chaos Shrine is by far the most interesting of modes, as it unlocks short sequences of two randomly generated songs. These two-song challenges, called Dark Notes, come in varying degrees of difficulty and can be unlocked either by beating previous Notes or collecting new ones via StreetPass.

The songs themselves come in three distinct challenge types, based on their contextual use in the games they come from, although the way the player interacts with them remains largely the same. Essentially, triggers appear on the screen, and must be hit with the stylus when they pass through a circular marker. Red triggers simply require the stylus to be tapped, gold triggers have arrows which require the stylus to be swiped in a certain direction, and green triggers demand the stylus be held on the touchscreen until they’ve fully passed through the marker. The game takes a lot of influence from both Elite Beat Agents and Gitaroo Man, although it is not quite as intense as either of those games.

The way triggers and the marker behave are defined by the type of song being played. Field Music (drawn mostly from FF‘s world maps) has triggers flow from left to right as a party member walks through an environment. Hidden items can be encountered along the way, and hitting special triggers can unlock a Chocobo, which rides through the field area at high speeds. The twist in Field levels is the fact that green triggers aren’t just straight lines, and the stylus will need to be moved up and down in order to stay on the path. 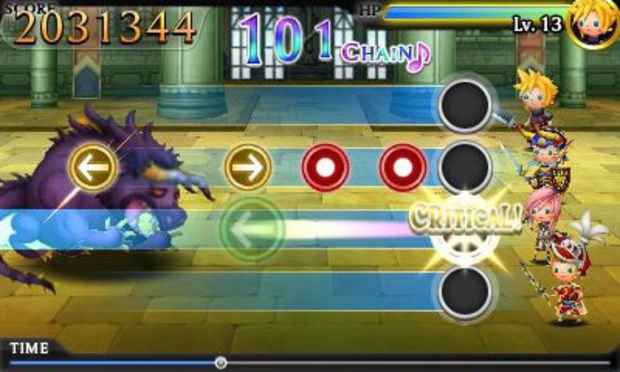 Battle Music features the entire party, whose members successfully hit monsters every time a trigger is successfully activated. The aim is to defeat enough monsters to see how far the party can get and, hopefully, kill a special boss creature. There’s no penalty for playing through the entire song and failing to beat the boss, but there are rewards for a party strong enough to terminate the Safer Sephiroths and Gilgameshes that might appear. Finally, there’s Event music, which plays a movie from a game’s most famous scenes in the background and moves the marker across a pre-built track populated by triggers.

At first, the game seems fairly uninteresting. The “Series” mode of basic challenges aren’t difficult at all, and progression feels very basic and sparse. It doesn’t help that the game’s end-of-level statuses and menus are a pain in the ass to sit through every single time a song is beaten. One’s first impression of Theatrhythm is that of a repetitive and dull game, featuring very little interaction and feeling like a destitute man’s answer to Elite Beat Agents.

Fortunately, however, things heat up when the Challenge and Dark Shrine modes open. Playing songs at higher difficulty levels really makes the game come alive, as triggers move fast and depend upon some deft stylus-swiping. As high levels of challenge open up, the requirement to pick a good party becomes evermore crucial, as the ability to deal extra damage or heal the player’s health bar gradually reveal themselves to be essential components of success. The game adds a little artificial difficulty, it must be said, by randomly switching the triggers to match the music’s melody or rhythm at any given time, but a cool head and a strong party ought still to prevail. 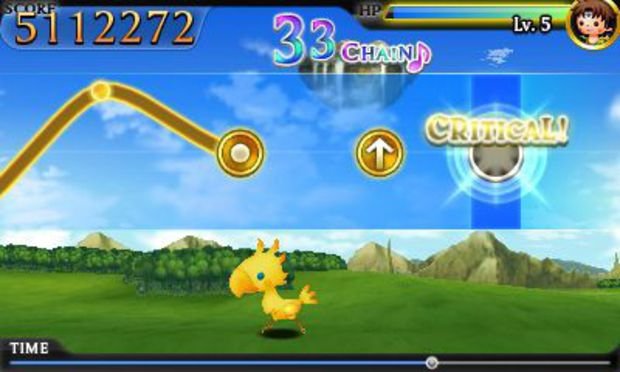 The Dark Shrine has the most potential as it contains more than just the three songs per game featured in other modes. Here, rare tunes can be discovered, such as “JENOVA” or “Mambo de Chocobo,” and the idea of never knowing what you’ll get next can be pretty enthralling. The concept of sharing Dark Notes via Street Pass gives the mode a “collect ’em all” feeling that makes it stand out from the static Series and Challenge modes, and theoretically there is a ton of replay value on offer. Theoretically being the operative word.

As is the unfortunate nature of Chaos Shrine, the randomized tunes means that a lot of the same songs will come up time and time again, and after you’ve played “The Sunleth Waterscape” for the fifth time, progress starts to feel disheartening. It’s wonderful to uncover a brand new song, but it doesn’t take long for such happy moments to become far-flung and sparsely encountered, while the boredom of playing the same old tracks creeps in. Since this mode is the only way to access songs outside the limited pool presented in Series mode, it asks a lot of patience and needs a high tolerance for hearing identical tunes over and over — a boon in the case of “Battle of the Big Bridge,” not so much in the case of anything from Final Fantasy XIII.

Theatrhythm Final Fantasy is a fun and engaging game for as long as the freshness of the experience lasts, but it doesn’t last very long. The amount of repetition relied upon indicates that there’s not a great deal of content on offer, while tunes have been held back to sell as downloadable content. As 3DS and PS Vita games face ever stiffer, considerably cheaper competition from mobile devices, these games need to be providing a shedload of content to justify their high asking prices, and as good a game as Theatrhythm is, a shedload of content is what it does not have. 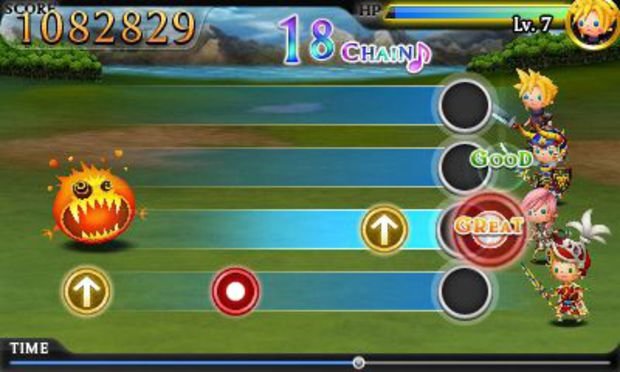 All things considered, it is still a good game. It’s well crafted, it’s bursting with rose-tinted memories, and the average Final Fantasy fan will be unable to play it without goosebumps. While the songs can replay far too many times, there is at least a lot to unlock for the highly dedicated. New party members, stronger abilities, and a range of party-aiding items can be uncovered through continuous play; defeating Chaos simply reveals end credits, rather than terminating the game entirely. Still, the threat of boredom is always there, and it’s highly advised that the game be played in short bursts to minimize the feeling of treading water.

Theatrhythm Final Fantasy is beautiful and charming in many respects, but an absolute drudgery in others. At the end of the day, though, unlocking that track from Final Fantasy IX that you just hoped would be there is a special kind of fun that fans will live for. It’s just a shame that such fun is not consistent and frequent enough to truly make this the memorable experience it deserves to be.