She’s still got it

I’ve always thought that Shantae is a bit of an underrated series. While WayForward can be hit or miss these days, I can always rely on their ability to craft a good platformer. Shantae: Risky’s Revenge for the DSi is one of my favorite games in the genre, so naturally I gravitated towards the follow-up, Pirate’s Curse.

While Curse takes a few steps back from the formula developed by its predecessor, it’s still a great action romp that any 2D fan can get behind. 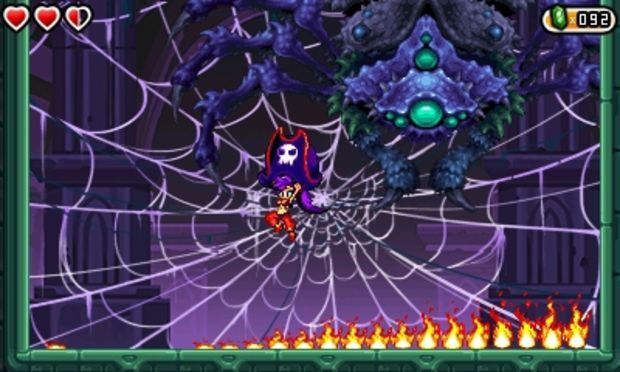 Shantae and the Pirate’s Curse follows the storyline so far, which sees Shantae living a normal life without the genie powers that were taken from her at the end of the last game. This doesn’t change up the formula much, as she still has her signature “hair whip” ability to attack enemies, and will still gain new powers over the course of the game — they’ll just be a little less genie-like in nature (though I miss her transformation forms dearly).

It feels like a natural progression of the story, and it’s interesting to see Shantae interact with people around her as a human. As usual, the narrative is over-the-top and wacky with jokes and references galore. It’s never “laugh-out-loud” funny, but WayForward does a decent job of keeping things interesting, and their characters likable.

The conceit this time involves an unlikely alliance with Shantae’s nemesis Risky Boots, to put down the evil curse of the Pirate Master, Risky’s old boss, once and for all. Instead of following the concept of Revenge‘s giant, singular open world, Curse instead has a small collective of islands, which function as mini-worlds with the same focus on exploration.

This is where I become a tad conflicted. It’s noble that WayForward would want to mix up the formula, but each map as a separate entity feels less impressive than one actual world. All of them have their own unique themes (a desert, a snow world, and an undead bog for instance), but the maps themselves feel small, and getting from place to place can be a hassle. Instead of teleporting around using spots in one hub, Shantae has to get back to the start area each time, access the ship, and sail somewhere else.

After unlocking a new island, this usually comes into play in the form of some puzzle that must be solved before accessing the new dungeon. The task isn’t always clear, so it may require players to search every previous island inside and out before progressing with the story. It helps that the core game itself is so solid that it’s fun to roam around, but it can get tedious over time to have to island jump over and over. The bosses also aren’t as memorable this time around, and even a comical boss rehash doesn’t do the trick.

Having said that, the actual mechanics are as slick as ever. WayForward’s formula for Shantae is among its best work, and every jump, hair whip, and ability use feels perfect. This time our hero will have to rely on items and pirate gear to do the job, including classic concepts like potions and attack-boosting drinks, as well as more game-changing upgrades like a downward slashing scimitar and a gun. 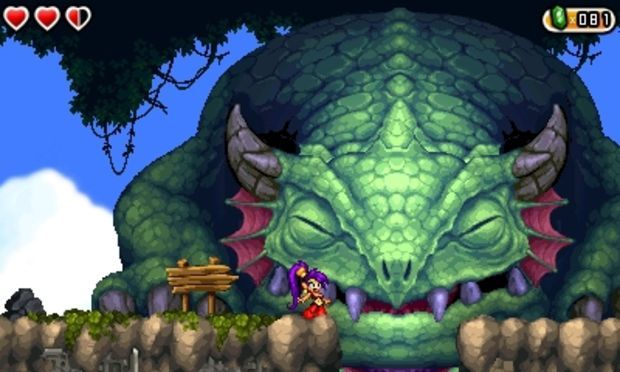 Because her newfound powers and items are so fun to play around with, the sometimes clunky transportation setup is excusable. The actual dungeons have some pretty interesting layouts (with plenty of secret areas to find, some of them downright dastardly), and overall I felt like a few of the game’s areas were some of the most challenging zones WayForward has crafted yet. If you’re like me and gobble up platformers for breakfast, you’ll find a lot to like here.

It took me roughly seven hours to complete the story with a decent amount of exploring. As a general rule it is longer than Risky’s Revenge. Diehard fans can search for every heart piece in the game, as well as gather every bit of dark magic (hidden across each world) to unlock the true ending. Thankfully, WayForward has placed an indicator on the selection screen that shows how many of each collectible is left in every world — so taking on that endeavor is manageable and not a hair-pulling ordeal.

Shantae and the Pirate’s Curse under-delivers on a few aspects of the overall package, but the fact remains — genie or not, Shantae is still very much relevant in the current market. Just keep in mind that at times it feels like an appetizer for the upcoming Half-Genie Hero, which sees the full return of Shantae’s powers as well as a fully playable Risky Boots.