Sleep is for the weak

It’s hard not to love the Mario & Luigi series. A simple set of role-playing games that have, over the course of its installments, given us some of the best new characters in the Mario universe, it’s a light and often quite funny franchise. Mario & Luigi: Dream Team is the fourth in the set, and it retains much of what makes the series so difficult to dislike.

That said, Dream Team is perhaps the most formulaic game in the series to date, despite the addition of a new “Dream World” and the changes it brings to the battle system. After following the wonderful Bowser’s Inside Story, this latest chapter is a less surprising, less amusing, altogether less endearing prospect than previous entries in the series.

That doesn’t mean it’s bad, though. After all, it’s following some damn fine performances. 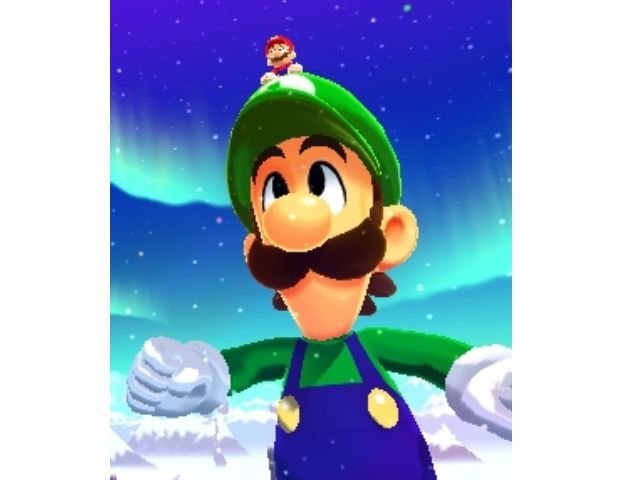 Dream Team takes us to Pi’illo Island, a resort destination where sun, sand, sea, and absolutely no sex of any kind are always on the agenda. Mario and Luigi are escorting Princess Peach on a royal visit, but it’s not long before evil threatens the land. The big bad this time is Antasma, the Bat King, sealed away in a land of dreams and ready to have his revenge. Of course, Peach is prime kidnapping material, and it’s up to the Mario Bros. to save the day.

An altogether slower game than its predecessors, Dream Team suffers from a predictable and routine plot, a supporting cast of mostly forgettable characters, and an excessive amount of tutorials that halt the flow of the game as far as ten hours into it. Antasma makes for a sadly charmless antagonist despite his fantastic visual design, especially compared to Fawful (who doesn’t get to be the big bad). Things get more fun when Bowser shows up, because Bowser is always entertaining, but he’s not in it enough to really keep the story hopping. The comedy upon which previous entries have been built relies this time on repetition of tired stereotypes and some rather lackluster slapstick. There’s just nothing worth raising a smile about this time.

Roughly half the game takes place in the “real” world of Pi’illo Island, playing out almost exactly like the last three games. A turn-based system which uses timed button presses to increase the effectiveness of attacks of counter enemy assaults, the Mario Bros. have their usual boots, hammers, and cooperative Bros. Attacks with which to fight back enemies both exotic and familiar. It’s as satisfying as ever to time attacks just right to earn “Excellent” ratings, though it seems to have been made easier than before. Hammer attacks don’t require their timing to be as precise anymore, while countering is telegraphed more clearly by most enemies. 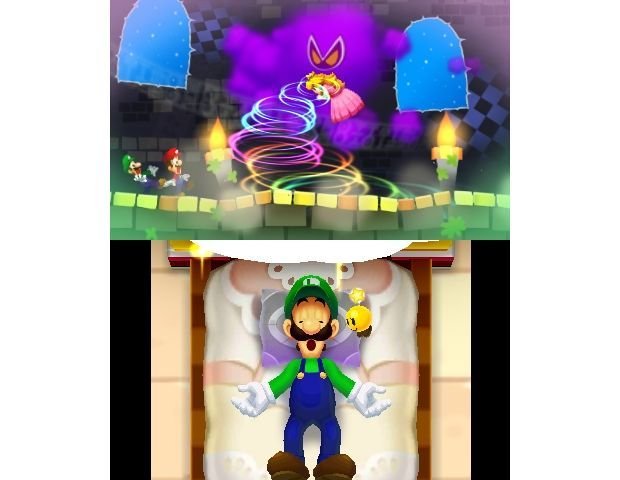 The other half of the game takes place in the slightly more interesting Dream World, which replaces the isometric overworld with a sidescrolling one and introduces a range of new abilities. In Dream Team, Mario enters Luigi’s brain while he sleeps, and works with his imagined avatar, Dreamy Luigi. In battle, Mario alone faces large groups of enemies, while Dreamy Luigi acts as support. When Mario bounces on enemy heads, he calls down a rain of Luigis, and if he uses the hammer, a line of Luigis send a shockwave across the battlefield. Unique Bros. Attacks also feature, which are built around collecting large amounts of Luigis with screen tilts or timed jumps, before using the giant green mass to hammer into the sea of opponents.

Outside of battle, Dreamy Luigi is used to “possess” certain environmental objects, known as Luiginary Works. When Dreamy Luigi is inside one of these Works, they can be manipulated by poking around the real Luigi’s sleeping face as represented on the lower touch screen. For instance, the first Work is a Luigi-shaped plant with big, mustache-shaped leaves. By tugging on the real Luigi’s mustache, you can yank these leaves toward Mario and use them as slingshots, flinging him to higher places. Another Work places Dreamy Luigi in a big whirlwind, which blows background objects into the foreground if you tickle Luigi’s nose until his sneezes.

These new gimmicks are fun to use, though everything is mapped out plainly enough to where no real thought is needed. You can see quite clearly what needs to be done in each screen, and the rest is all going through the motions to get it done. Naturally, most new powers come with a tutorial or patronizing explanation, even if it’s bloody obvious how a new Luiginary Work … works. 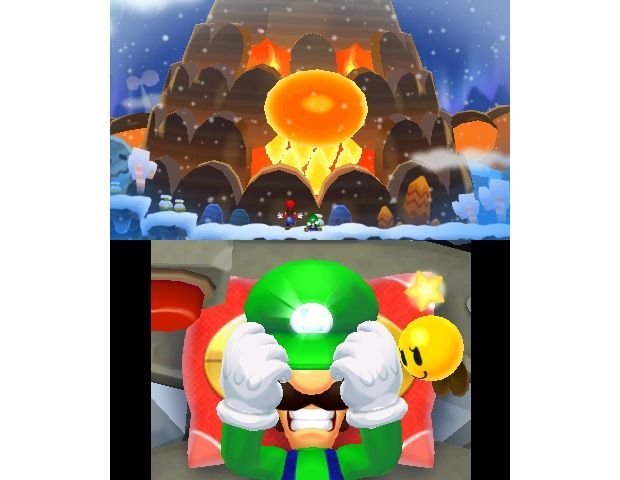 It also feels like much more could have been done to make the Dream World more than just an excuse to slightly tweak the battle system. The promise of entering Luigi’s subconscious is never really capitalized on, while Dreamy Luigi himself might as well be the real one for all the difference he makes to the actual plot. The stage was set for the series to get really wild with its ideas and give us some really silly moments, but apparently dreams are as humdrum as reality in this world. I will admit, however, that riding on a column made of thousands of Luigis has a certain wrinkle of amusement to it.

With the series moving to the 3DS, a new art style is in place to capitalize on the added depth of perspective. Mario, Luigi and all the support characters still retain a two dimensional sprite-based look, but the environments are now fully three dimensional, as well as loaded with busy visuals that float in the foreground and background. The result is somewhat jarring, the flat characters looking out of place in the world around them, though the 3D effects are quite impressive during battle, especially boss fights which often use the added perspective to make fights feel more engrossing and interesting.

The soundtrack is really quite superb this time around, the boss music providing a highlight. Each area has a distinct and pleasant tune, though the game does suffer from a lot of repetition, and even the best tunes will get tiresome before the experience is concluded. 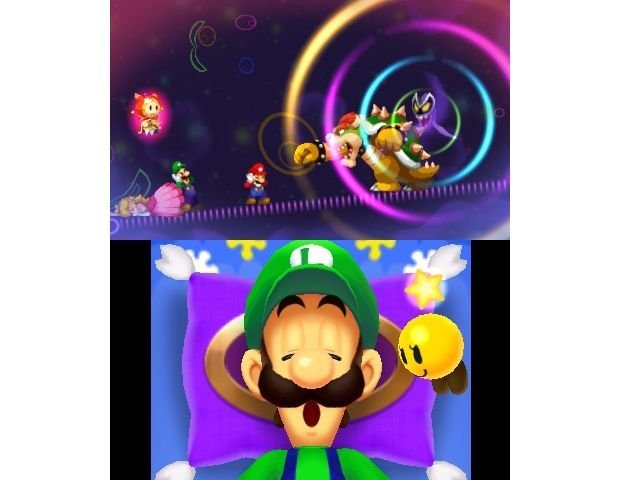 Mario & Luigi: Dream Team had a damn tough act to follow, coming off the back of Bowser’s Inside Story. The last game mixed up the gimmicks, and raised the humor to such a degree that playing it was an utter joy. The new Dream World fails to provide the same sort of intrigue that Bowser’s innards had, while the storyline and supporting characters just aren’t very compelling.

With its weaker writing, less compelling action, and many moments where the game just drags its heels, Dream Team manages to retain a basic level of enjoyment that just comes natural to this series, while sadly representing a noticeable step down in quality.