At this point, it’s customary with a Nintendo game to mention how that’s not a bad thing, to highlight how nothing was broken and didn’t need fixing. In Mario Kart 7, however, I don’t think that’s appropriate. For once, sticking to tradition has not worked in Nintendo’s favor. 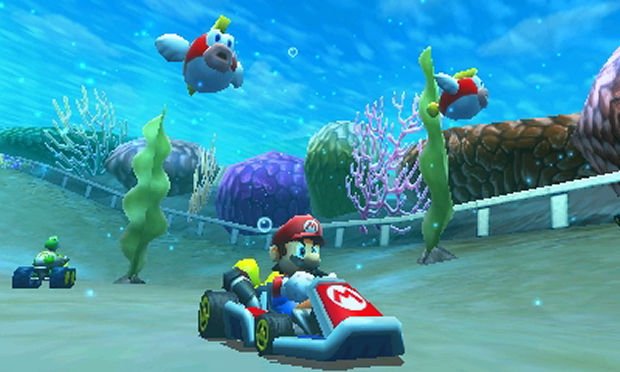 Describing Mario Kart 7 is going to be almost pointless for anybody who has played most of the series, especially since this one ignores the more gimmicky aspects of Double Dash!! and Mario Kart Wii. The seventh iteration of the venerable kart racing series truly returns to the series’ roots, keeping things free of complications and delivering the kind of “pure” karting experience fans have played for years. Usually, such a simplistic return to form can be a good thing, but with Mario Kart 7, the roots have aged to the point where they may well have become rotten.

Indeed, Mario Kart 7 is the same Mario Kart you’ve fundamentally played six times before. There are 32 courses (16 new, 16 remixed versions of old courses) littered with obstacles and power-up boxes that boast familiar, luck-based items. Homing red shells, slippery banana skins, and vision-obscuring squids are all back, joined by three fresh items — a Tanooki Tail that can swipe players and obstacles, a Fire Flower that rapidly tosses projectiles along a straight path, and a big red Seven that gives players seven previously established items to choose from. The fire power is great at annoying other players and the Seven is definitely cool, but I must say that the Tanooki Tail is fairly useless — obstacles are easily avoided and the power-up rarely appears when you’re close enough to other racers to strike them.

Other fresh additions include gliding equipment and underwater sections. Although these new elements provide something aesthetically different, they don’t actually change the game. Underwater racing is a little slower and air gliding is a little floatier, but their impact on the gameplay is minimal at best, appearing merely as vapid contrivances that exist to provide the illusion of variety rather than actually altering the core experience.

It takes seconds for all the familiar problems with Mario Kart to surface. Rubber banding and fixed races are still an integral part of every course, and victory in a race yet again hinges hugely on the element of basic luck, with items such as the Blue Shell returning to punish players who commit the sin of maintaining success. These are long-standing issues with the series that many will likely have gotten used to but really ought to have been dealt with by the seventh installment. Simply put, these problems have grown incredibly tiring, and items like the Blue Shell stopped being funny several sequels ago.

Familiar problems would be bearable if not for the other big issue with Mario Kart 7 — it’s just too damn slow. Even budget kart racers like Jimmie Johnson’s Anything With An Engine are faster and more exciting than this. The game’s casual pace goes hand in hand with the fact that it hasn’t changed one bit, and each separate issue enhances the other, exposing Mario Kart 7 for the weary and humdrum affair that it is. When even budget racers realize that the genre needs shaking up with fresh ideas and/or at least a measure of energy, it’s almost depressing to see the world’s leading kart racer trudge out of the starting gate with such a dismal, sluggish, outdated little offering.

Fact of the matter is that kart racers are old news, and this is one of the most routine kart racers on the market. Even series like Dynasty Warriors and Madden boast fresher features with each iteration than those found in Mario Kart 7, and as someone who usually has no problem with sticking to a winning formula, not even I can justify how formulaic Mario Kart has become. Nintendo has truly played it safe with Mario Kart 7, but it’s done so to such a degree that the game could be accused of cowardice. Something bolder needed to arrive, something that shook up a very tired style of game. Nintendo shockingly chose not to take that brave step this time around. 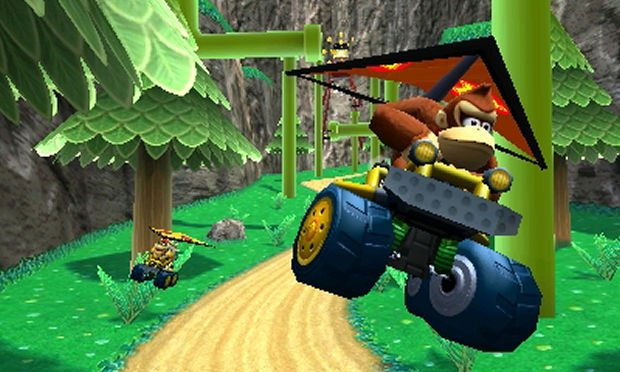 The only vaguely compelling element is the new kart customization feature, but it is about as streamlined and restricted as you could ever hope to get. You basically get to unlock and swap new kart bodies, wheels, and gliders by collecting coins in the various races. Each new add-on has its own set of statistics to help with speed, turning, and acceleration, but ultimately, you won’t be spending much time on creating a personal vehicle since there’s very little to play with. Same can be said for the new roster of racers, which doesn’t really bump the character count up due to quite a few having been taken out. I’d rather have Dry Bones back than the uninteresting bee queen from Mario Galaxy.

Both online and local multiplayer are included, with players able to partake in both races and battles. Once again, there’s nothing new here. If you aren’t sick of Mario Kart then you’ll probably find some longevity in the multiplayer, which is at least streamlined and allows for random play without the need for Friend Codes.

Nevertheless, multiplayer doesn’t really make the game more exciting, especially online where you can’t even have the fun of taunting each other and are instead stuck in a rather dry, joyless atmosphere. You also can’t quit out of the game during a certain point in matchmaking, instead having to turn the entire 3DS off if you want to stop. Which is convenient. 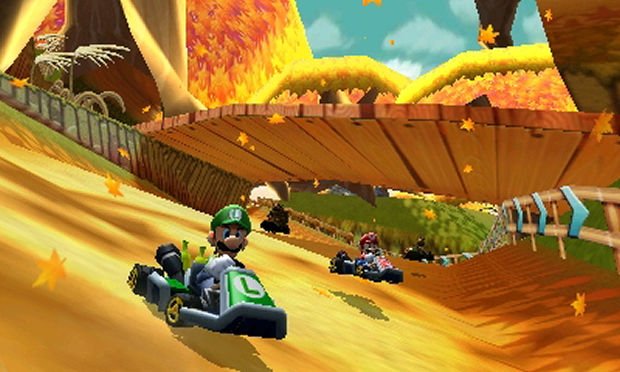 To be as fair as possible, one can say that Mario Kart 7 looks quite good. Although the 3D doesn’t really factor into the gameplay, it has the best 3D visuals on the system with very little sign of ghosting or eye-straining effects. In this regard, the simplicity has worked in the game’s favor. The bright, colorful tracks and entertaining racer animations are fairly appealing as well, while the music and sound effects are all standard with nothing that truly stands out.

Mario Kart 7 is as derivative as a game can get, and while we pour scorn on so many other games for rehashing themselves, something tells me this will get a free pass from many critics and gamers. That strikes me as ironic since Mario Kart 7 is the one game I’d hold up as the least deserving of any kind of leniency. It being an unadventurous and predictable retread, however, is only half of Mario Kart 7‘s problem. The other half is the fact that it’s a lethargic and mundane game, easily outpaced by games that could be considered knock-offs of the formula Nintendo itself perfected.

Mario Kart is in need of a severe shake up. This stagnant, crawling, and indolent effort is not it.