There are a lot of video games these days. Perhaps too many. Between the PS4, Xbox One, Wii U, Vita, 3DS, Steam, Oculus Rift, HTC Vive, iPhone, Android, Apple TV, Fire TV, and the Dreamcast, it can be easy to miss a game or two. Or three. Or thirty. Hell, each week here on Destructoid we talk about new titles releasing on the eShop only to never speak of them again.

For the most part, I think we feel comfortable skipping over a lot of these. There’s a reason we didn’t review something like The Letter or Sweet Memories Blackjack. Why spend what limited time we have playing those when there’s a game we can play we know you’ll want to hear about? Of course this means there’s always a chance we might miss out on something worthwhile, either because we simply didn’t have the time to look into it or it was overshadowed by something bigger. That happened this past July when we glossed over the release of Gotta Protectors because it came out the same day as a bunch of Kirby Virtual Console ports.

We’re not the only ones. When I first received a review code from Ancient (along with a nice letter asking me to please try it out), it didn’t have a single review. That was more than a month after its initial release. A part of me felt bad for the game, so I decided to give it a whirl. You should too because it’s amazing. 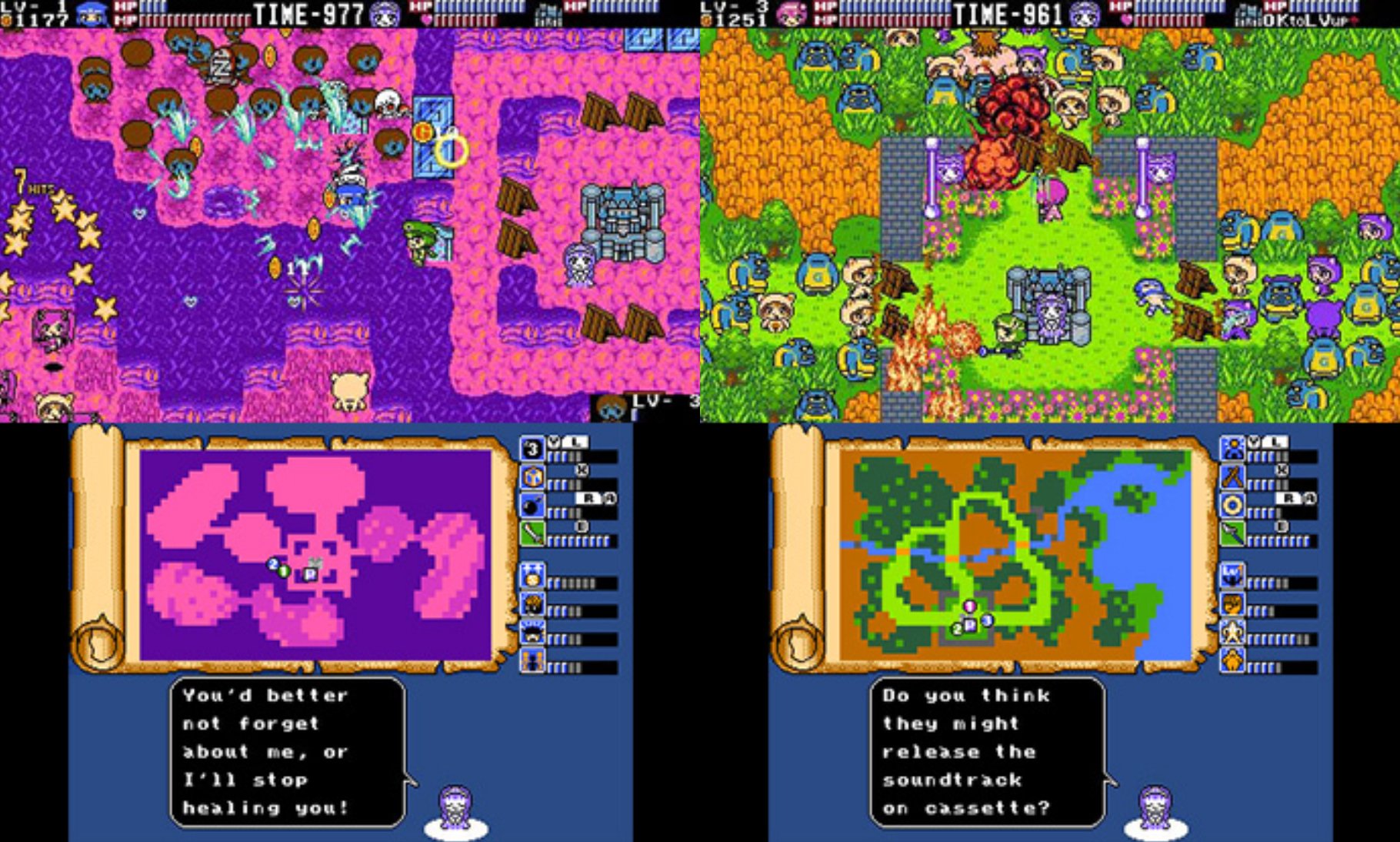 The story for Gotta Protectors is silly. The Kingdom of Magicadia is transported to a different dimension where it soon becomes overrun by monsters. A simple setup for a simple game, but the writing had me in absolute fits. Juvenile humor is prevalent throughout with several jokes only the perviest of adults will appreciate. Characters frequently break the fourth wall, like Princess Lola wondering aloud if reviewers would enjoy this game, and a lot of fantasy tropes are picked apart and parodied. I know self-awareness in games is all too frequent these days, but when it’s done right, it should be appreciated.

Gotta Protectors casts you in the role of one of Princess Lola’s personal guards, known as the Gotta Protectors. There are six to choose from, including a cranky old man with a lance on a horse and a sword-swinging, thong-wearing ninja. Before each battle, you pick your character, equip their weapon, and assign their skills. You have three slots for active skills and four for passive. Some of the skills are exclusive to characters, such as the Amazon’s highly effective boomerang attack, while others are shared between your squad.

In battle, it plays like an action game mashed-up with an RTS. You and the princess start out at the castle, usually protected by a thin layer of barriers enemies will immediately begin trying to break down. The castle is vital to your success as it’s where you’ll level up your hero. You start each map at level one and can use the money you collect in battle to upgrade them. Hanging around the princess will restore your health and if the castle gets overrun with enemies, you can push her to safety.

Maintenance of barriers is the key to victory. As enemies wreck them, you can repair them with your attacks. The B button is your basic attack, while A,X,Y will control whatever active skills you have assigned to them.

Enemies will keep coming until you take out their spawn points and, depending on the map, successfully doing so might usher in a second wave of more difficult creatures with entirely new points of origin. These spawn points will often be on the other side of the map, so you have to make sure your princess is well protected before you set out to destroy them. If a map ever becomes too hard, you can adjust the difficulty or tackle it with friends in local co-op.

The map design here is outstanding and forced me to carefully think how exactly I’d proceed through each chapter. The longer I played, the more elements I had to account for. After I completed roughly half of the campaign, I decided to try my hand at designing my own map with the extensive editor. I’ve always loved map editors in real-time strategy and tower defense games and this is no exception. It’s incredibly easy to learn and you can share your favorite maps with other players via QR codes.

Money that you don’t spend leveling up or building new barriers can be used to upgrade parts of the castle, including its defenses, the dojo where you learn new skills, and the shop where you buy new weapons. You can also spend it on a new ring to boost your stats or make it rain on your townspeople so they love you. 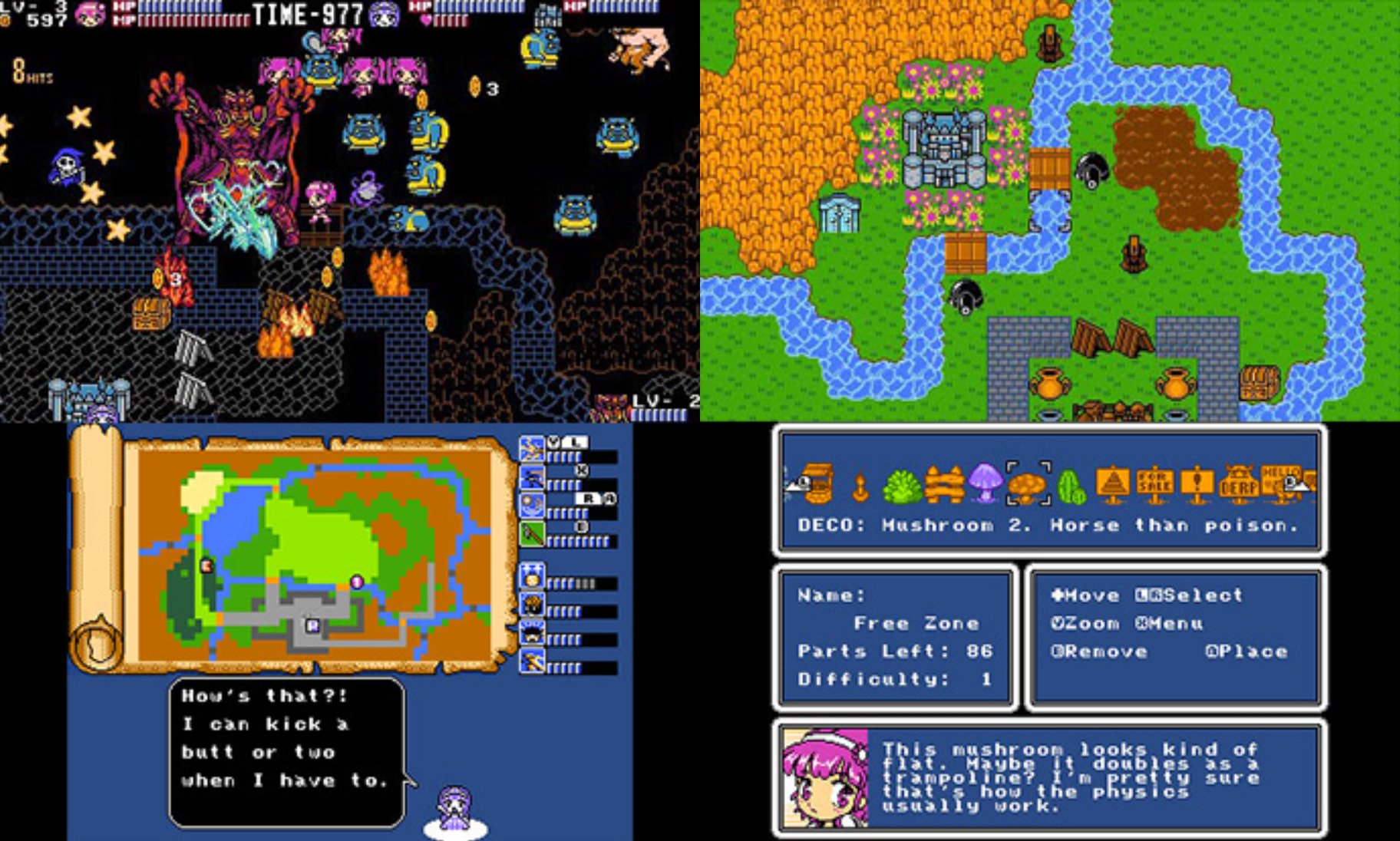 When I first saw Gotta Protectors in screenshots, I thought it looked like a mess with no rhyme or reason. In action, it’s a beautiful mess and one that embraces the third generation of gaming. The old-school 8-bit graphics can look rough and the sound effects tend to screech out of the speakers on my 3DS, but the aesthetic fits it perfectly and meshes well with the soundtrack that features outstanding music from the composers of games like Actraiser, After Burner, and Ridge Racer.

It’s a shame I almost missed out on Gotta Protectors because I absolutely fell in love with it. I love its simplicity, I love its music, and I love how well it accomplishes what it set out to do. This feels like a long-lost early NES title, right down to having to blow into a cartridge to start it up. With the map editor, I hope this becomes the type of game fans continue to support for years to come.