Par for the heavens

[You can read updated reviews for future patches here: 3.1, 3.2-3.4  as well as other releases/expansions here: A Realm Reborn, Stormblood, Shadowbringers.]

When our story began last week, I was a level 53 Paladin, soldiering through the new content for Final Fantasy XIV: Heavensward. I stand before you now as a level 60, having played everything that’s currently available.

My opinion on the expansion hasn’t changed much, which is a good thing. 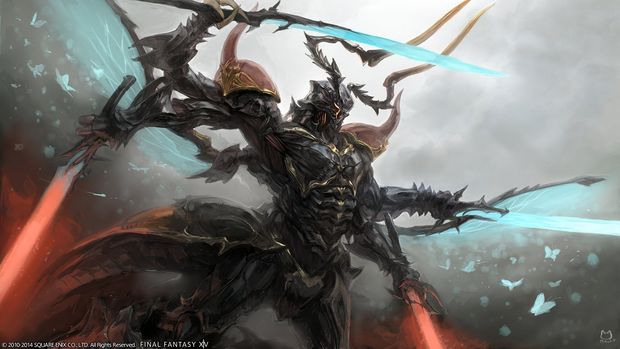 The “40 hours” of questing claim by Square Enix for the main story (levels 50-60) is accurate, but there’s a caveat. You’ll have to do a combination of sidequests, daily hunt marks (which can be done solo), and dungeons to push through some gaps, particularly in the middle levels. A few portions can be off-putting sometimes in terms of pacing, especially since the sidequests aren’t nearly as good as the main story questline. Having said that, there wasn’t any point, even the aforementioned lows, where I stopped having fun.

There’s just so much to do at this juncture of Final Fantasy XIV. I would frequently stop to do world hunts, which respawn every few hours or so in each area. They’re even more fun now once you’ve unlocked flight for that particular zone, and all of the old hunts still exist too, albeit with smaller rewards for kills. You could hunt all day if you wanted to. I’d visit my new apartment in my friend’s beachfront property villa in the Mist, and see what was going on with their new workshop — a feature that lets you build Free Company (guild) airships in Heavensward, which go on expeditions for more items, similar to Retainer quests. Although I don’t tend to craft in any MMO I play, I hung out with a group of crafters and chatted for hours about the new crafter meta and theories for some testing, which are insanely deep.

For those who aren’t aware, each crafting and gathering class has its own miniature storyline, and crafters in particular now have a even more complicated method of creating new high quality items. Crafting was always like a puzzle, allowing players to learn the best rotations for creating the best items, but now, there’s an “endgame” of sorts for the profession, featuring a separate system of crafting in guilds to help build airships, and more complicated patterns that will fetch big gains on the auction house. Flying makes gathering nodes more fun, which is a big improvement on the 2.0 system — and more nuanced with new gathering abilities.

I also took a break and started a Dark Knight, Astrologian, and Machinist, which are all new jobs in Heavensward. Although there’s a debate going on regarding the latter’s low damage output, I’ve grouped and played all of them, and each brings something unique to the table. The Dark Knight is really fun to tank with, as he can drop his “Grit” stance (having it on lets you take less damage) on occasion, which unlocks a whole host of damage-dealing abilities.

As a general rule you always want to be doing your core job and tanking with Grit, but when you need that extra push, the Dark Knight is ready and willing, and feels far more engaging than the existing Warrior. The Astrologian sacrifices a bit of firepower (compared to the White Mage and Scholar) but makes up for it with a variety of different healing tricks, and the Machinist is one of the most complicated DPS classes in the game. They are all worthwhile additions, and each role (tank, healer, ranged DPS) fits perfectly in the current meta.

By the time I was done with the story and hit level 60, I had played far more than 40 hours. While there are some predictable plot points and far too much Final Fantasy grandstanding, I have to say I enjoyed it as a whole. I really dig the dragon theme that permeates throughout the expansion (they commit to it), and I was satisfied with the conclusion, especially the final boss, which Final Fantasy fans will love. The epilogue also does its job of sufficiently teasing all of the upcoming free content updates, so I’m pumped to see where this goes.

The dungeons are all par for the course, which again, is a theme with this expansion. Every dungeon, including the three level 60 ones at the end, have the same linear design that is crafted to prevent you from speedrunning them. Gone are the labyrinthine paths of some low-level dungeons, as well as the tricks of the trade of the vanilla endgame areas; the structure is basically the same every time. Thankfully, the boss fights are spectacular, and nearly every zone features an encounter that has something I’ve never seen before.

Without spoiling it, my favorite dungeon has a fight where a bird flies up into the air, and causes the entire battlefield to fill with fog, forcing you to find his shadow before he comes back down. Another hilariously tasks players with picking up totems and placing them in certain areas to prevent a boss from casting a ritual that ties his health to them. Every fight is intuitive so you won’t be scratching your head going “how does this work?” but you will have to actually try. It’s a good balance, even if I wish some of the dungeons were a bit more open. 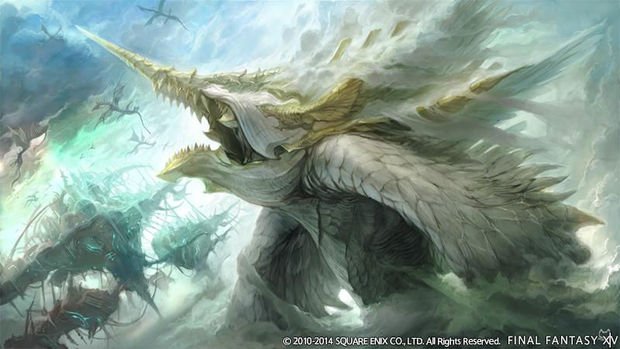 The two Primals (Ravana and Bismarck) are worthy additions to the game, and both have EX (extreme) versions that will test your might at level 60. Ravana is an awesome fight that I refer to as “the ninja bug,” and it basically feels like how Titan should have been, with a circular arena that you can fall off of. Bismarck on the other hand is like nothing else in Final Fantasy XIV, featuring the titular whale flying right next to a floating rock that the party is standing on. Players will have to hook him with harpoons (you can shout “call me Ishmael” while doing it) and whale on the whale’s weak point temporarily. I feel like Ravana is faster-paced and more fun, but again, Bismarck is unique.

Currently the endgame consists of gathering law tomes (obtained by high-level dungeons and hunts), buying item level i170 gear, and upgrading them to i180 by way of items from seals. Bismarck EX will net you i175 weapons, and Ravana earns you i190. You have two weeks to fully upgrade your left and right-side gear to face the first part of the Alexander raid, who will debut at that time (with the tougher “Savage” difficulty unlocking two weeks after that). Said raids will be even better thanks to the new loot systems, which can give a raid leader more control over who gets what (finally). With everything there is to do in the game though, it doesn’t feel like a grind to get to that point.

Did I mention Heavensward was beautiful? I’m pretty sure I have often, but I’ll do it again just to drive the point home. It looks fantastic, from the snowy landscape of Ishgard to the Souls-esque Dravanian Hinterlands, complete with lush plains and hellish mountains filled with fiery depths. I would often stop just to admire the scenery, which is even easier thanks to flying mounts. Every time I visit an old content area I long for the chance to use a flying mount, but alas, it’s only available in new zones.

Specifically regarding the PS4 version, it’s starting to feel the sting of the more open areas a bit, particularly when it comes to longer load times (which can be a pain while zoning in for hunts) and some slowdown. I should mention that said slowdown never becomes unplayable, even with 50 other players slashing away at the same world hunt target. It can just get a bit sluggish is all. My view is partially colored by the fact that the new Direct X 11 version on PC looks gorgeous and runs smoothly. 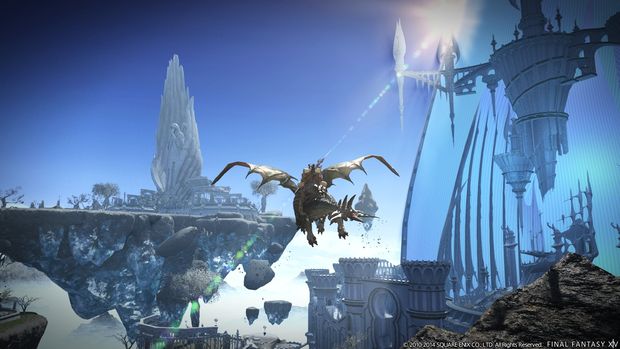 Down the line you have new storylines to look forward to, as well as the aforementioned Alexander raid, more 24-player casual raids (which aren’t currently in yet), a new PVP map, and a new multi-part relic weapon quest that will debut next month for all jobs. None of this was factored into this review, but it’s something to be aware of — based on its past track record, Square Enix will continue to evolve the game and make it better.

Final Fantasy XIV: Heavensward is more A Realm Reborn, which is a fine thing to strive for in my book. Whether you’re the type of player who enjoys crafting, endgame content, or role-playing, there’s so much to do here for people of all skill levels it’s insane. While I fizzled out a bit after completing the main story in 2.5, Heavensward has rekindled my flame.