Accompanying the fast approaching release of the Nintendo 3DS XL, New Super Mario Bros. 2 aims to bring the simple, joyous fun of its DS predecessor on the new hardware.

If you played the original New Super Mario Bros. then you will be very familiar with what is on offer here. With its challenge-based Coin Rush mode, and a new multiplayer component, there is plenty more reason to anticipate a return trip to the Mushroom Kingdom.

Thanks to what must be the world’s most inept protection service, Princess Peach is yet again whisked away to Bowser’s castle by the young Koopalings. It’s the setup we all know and love, and honestly, who would want it any other way? The slight difference this time around is New Super Mario Bros. 2′s focus on coin collecting.

While the main focus is still on platforming your way through a variety of courses on the way to defeat Bowser, that journey is supplemented by a coin collection frenzy, tasking players to earn a total of one million coins. Yes, that is 1,000,000 coins. This new focus is reflected throughout the game in myriad ways, from power-ups to secret levels, new block types to game modes. 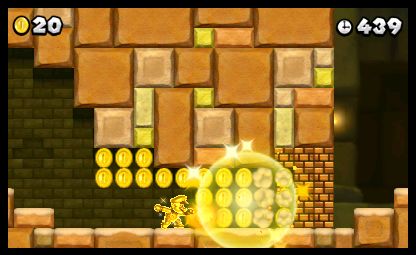 While there are all the classic mushrooms, Fire Flowers, and Raccoon Suits to be had, NSMB 2 does of course bring some additions. One of the new power-ups in the game, the Golden Mushroom, is curious as it does not actually directly enhance Mario himself. Rather, all the enemies in a course are temporarily covered in a golden tint, with coins rewarded for taking them out while in that state. Another turns Mario in a metallic state, allowing you to break bricks on contact, and is a great tool for breezing through levels and finding hidden coin blocks.

Speaking of which, there are new block types in NSMB 2 as well. The new Roulette Block offers up coins in, as the name suggests, random values from five to upwards of fifty. Returning from Super Mario Land 3D is the Prize Block, but with some new tweaks. Whereas the Prize Block of Mario Land 3D granted you coins for every few seconds you had it equipped, the Prize Block of NSMB 2 gives up the goodies based on the speed of your movement. The faster you run, the more coins are added to your collection. Sprint your way through a level, and watch your coin counter ring higher than you can follow.

The power-ups and bricks aren’t the only things that will help you hit the 1,000,000-coin milestone. New secret levels, called Rainbow Courses, are designed for exactly that. By accessing the warp cannons in each world, players can enter these hidden levels, where enemies are kept minimal and the coins are numerous. Being launched from a cannon, Mario moves at impossible speeds, leaving the player to need only worry about jumping around enemies and timing themselves through each trail of coins. There are challenges that must be met in order to access these levels, though. These challenges vary from world to world, but can range from finding secret exits in certain levels to collecting all the star coins in others. 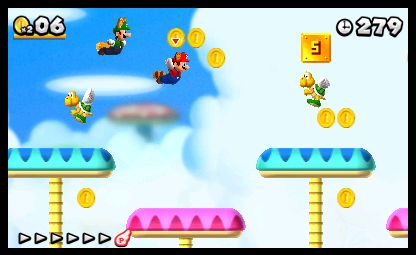 Perhaps the best opportunity for coin collecting is found in the multiplayer component of NSMB 2. Through local wireless connection only (both players will need their own copies of the game), players can go through the entire game in co-op, and if it’s coins you’re after, there is plenty of incentive to play this way. Whenever you join a co-op session, all the coins you collect at the end of any given level have a 2x multiplier. Used in conjunction with Rainbow Courses and the like, you can see the opportunities stack together nicely.

That being said, the co-op did leave something to be desired. Basically, whoever is host is put at an unfair advantage as the screen moves along at their pace, leaving Player 2 completely at their mercy in terms of getting knocked off screen and sent to an early death.

There are ways to steal this advantage, such as hitting checkpoints first or simply ground pounding Player 1, but even with this back-and-forth exchange all that is really happening is that one person is screwed while the other holds all the power. The best co-op games are the ones that make all participants equally important, and that doesn’t seem to be the case here. 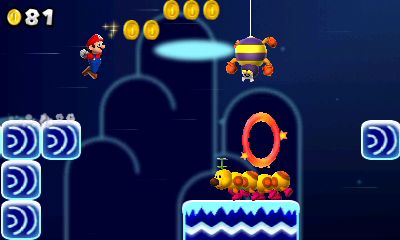 Mine is better than yours

If a more competitive experience is what you are after, then perhaps Coin Rush will tickle your fancy. Essentially a ranked challenge mode, Coin Rush tasks players with running through sets of courses to see how many coins you can collect in a given run. You can earn multipliers by finding star coins and other hidden items, but be warned. Time is finite so don’t expect to do your best until you’ve gained a good working knowledge of the level’s layout.

The rankings comes into place via the 3DS StreetPass system, where players can pick up and share scores with others, offering new incentives to go back for more. Interestingly enough, if you do want to challenge another player’s score, you can choose to do so normally, or with the white and gold Raccoon Suit. For those of you who didn’t play Super Mario Land 3D, the white and gold Tanooki Suit granted invincibility to damage as well as the glide ability. The white and gold Raccoon Suit similarly grants invincibility and the fly ability, an odd addition to a challenge mode. There is no penalty to your score, either, if you choose to play that way, but there is at least an icon that saves next to whatever score you get, signifying your cheapness.

In any case, what’s on offer with New Super Mario Bros. 2 is undeniably Mario, bringing all the ebullient charm we’ve come to expect. There are some oddities with respect to the multiplayer, but even so, the journey to one million coins is a challenge I cannot wait to get started. Being back in the Mushroom Kingdom will feel so good come August.