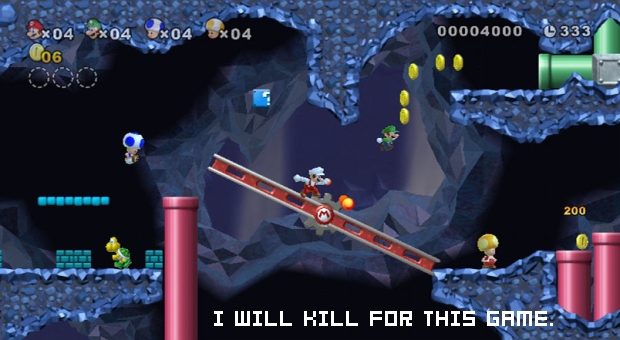 I realize that the amount of great games landing next month is very, very high, but in all honesty I would gladly sacrifice them all in order to get my hands on New Super Mario Bros. Wii. Mario fanboy? Yes, unabashedly, but I don’t really have a reason not to be as far as the main games in the series go (and the majority of his spin-off titles). However, this feeling is not just based on my love of plumbing brothers, there’s video proof that fanatical devotion is warranted.

Below you can check out some gameplay of the new ice flower item, which would be cool normally, but is now awesome because it’s being used to in an underwater level where the fish get turned into floating blocks off ice that Mario can use as platforms. I can’t even begin to describe the myriad of platforming possibilities this opens up, but I can wonder why it took so long to bring out the obvious counter to the fire flower. Also below the jump is the opening “cinematic” for the game. I put cinematic in quotes because it’s 57 seconds long. However, it’s perfect. In just 57 seconds the entire plot of the game (Spoiler: Peach is kidnapped!) and the reason why there are all these power up items laying around the world are revealed. It’s a bit of retrotastic plot description that must be loved.

Seriously, love it. I’ll cut you if you don’t.