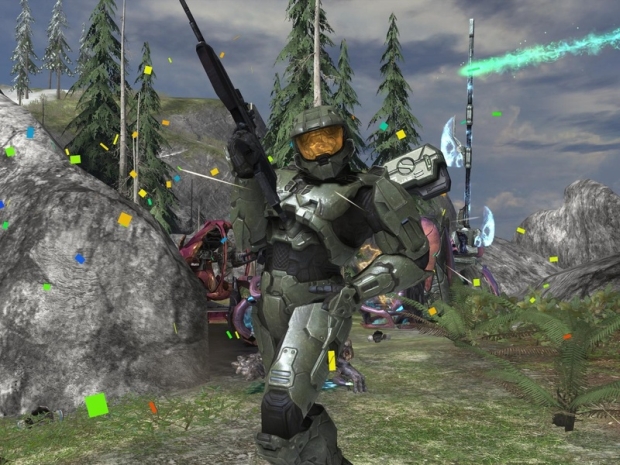 I love the Halo series. The Halo universe has a deep and rich story to it, but you wouldn’t know that as the games do a horrible job at giving players a decent story. You have to read the first five books in the series to really understand why this series is so damn good. SephirothX did a pretty good job at explaining this in his promoted Monthly Musing from last month.

One thing that has been a major mystery in the Halo series is the Forerunners. They’re the ones that created the Halo constructs, the ones that the Covenant worship and the creators of the Flood. Tor Books just announced a new Halo book trilogy and it looks to finally reveal the mystery as it’s going to be set during the time of the Forerunners. Science Fiction icon Greg Bear will be writing this new trilogy with the first book coming out early 2010.

I was hoping for more Halo books from Eric Nylund, but it looks like Greg Bear is more then capable of telling a good story. He’s worked on over thirty science fiction novels and has won multiple awards for his work. Needless to say, I’m looking forward to the new books. How about you?

New York, NY – Monday, April 6, 2009 – Tor Books, an imprint of Tom Doherty Associates, LLC—the largest publisher of science fiction in the world—and Microsoft are pleased to announce a new trilogy in the New York Times bestselling “Halo®” series based on the hugely successful Halo videogames franchise for the Xbox 360. Three previous “Halo” books published by Tor have sold over a million combined copies to date. The first novel in this new trilogy will be published in early 2010. An unabridged audiobook edition will publish simultaneously with the new novel.

A science fiction icon and winner of the field’s highest awards, Greg Bear has signed on to write three “Halo” novels set in the time of the Forerunners, the creators and builders of the Halos. Almost nothing is known for sure about this ancient race. Worshipped by the Covenant as gods, their engineering relics pepper the galaxy, and their connection to humanity remains unanswered. Devoted fans of both the books and games will finally get to delve deep into the era of these enigmatic beings, and discover for themselves the epic story behind one of the great mysteries of the “Halo” universe: the complete disappearance of the Forerunners from existence. “Greg Bear is truly a living legend of science fiction. To have him at play in the Halo universe will be exciting not just to Halo fans but to science fiction fans on a whole,” says Eric Raab, Tor editor.

Greg Bear is the author of more than thirty books of science fiction and fantasy, including the international bestsellers Eon and The Forge of God. He has won multiple Hugo and Nebula awards for both his novels and short fiction. Bear has also served on political and scientific action committees and has advised Microsoft Corporation, the U.S. Army, the CIA, Sandia National Laboratories, Callison Architecture, Inc., and other groups and agencies. His talent for taut narratives, intellectually rigorous themes, and realistic, appealing characters make him the most qualified author writing today to extend this blockbuster franchise. “We’re thrilled to have Greg Bear join a great tradition of sci-fi writers who’ve inhabited the ‘Halo’ universe, and Greg’s incredible sense of epic scale and wonder is the perfect match for the Forerunner mythos,” said Frank O’Connor, Franchise Development Director for Halo, at Microsoft Game Studios.