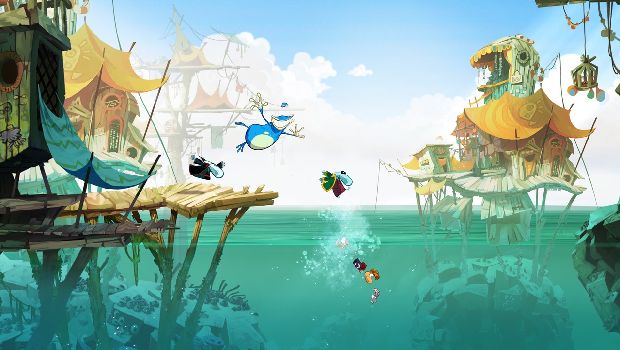 The Rayman Origins booth at the EB Games Expo on Australia’s Gold Coast was an area I thought would be largely ignored. Given the hours people were waiting to play Battlefield 3 or merely watch a section of The Elder Scrolls V: Skyrim, I was under the impression Ubisoft Montpellier’s reboot/prequel to the Rayman series would be all mine to play at my leisure. Not so.

For two days, I couldn’t get near the thing. Milling around the two screen set-up often, I had no chance to get hold of the Xbox 360 version they were showing. Only due to blind luck did a third player spot open up and I sat down with a kindly couple to play Rayman Origins.

2D platformers have seen something of a resurgence in recent years, with one small caveat. Most of the resurgence has been due to downloads. Braid, Super Meat Boy, Outland and even Shadow Complex have made a significant impact on the genre. Rayman Origins, though, will be asking full price when it is released on a disc in November; a change from its initially planned format as an episodic, downloadable title. But this shouldn’t worry anyone who has a chance to play the game beforehand.

Like a smack to the face, the game is downright gorgeous. Its striking art style of painted colours and vibrant backgrounds look good in screenshots, but to see it in motion on a huge screen is impressive. The controller I picked up belonged to series character Globox (the big blue one) as the couple next to me was controlling Rayman himself and one of the insect ‘teenies’.

I learned later that the game moves at 60 frames per second and this came as no surprise. Even with three characters (out of four) playing and a ton of other madcap insanity on screen, Rayman Origins moves so smoothly it’s almost not even worth thinking about. It’s as if the game has never even heard of the concept of ‘framerate issues’.

The action itself is pretty familiar to anyone who has played platformers. Running, jumping and using the environment to fight enemies and collect items is pretty standard here. One thing I noticed as we were playing was the obvious similarity to New Super Mario Bros Wii. The frantic multiplayer co-op even places you in a bubble when you die that can only be burst by another player to allow you to continue. 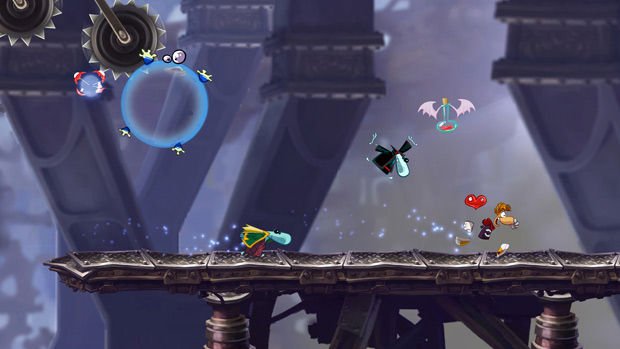 Having now played both games, though, I can say the co-op felt a bit over the top in New Super Mario Bros. Wii, whereas here it seems more suited to the gameplay. Using other players to help you get items seems to be more of a focus in Origins, and less emphasis is placed on the frustration of accidentally causing another player’s death.

Being propelled across the screen via wind ducts and trampolines is only enjoyable due to the game’s precise controls. There are so many precarious edges and deadly spikes in the environment that it becomes tense not to die at every turn and if the controls were even a tiny bit less responsive, some frustration would creep in.

I never expected a Rayman game to be this enchanting. A lot of it has to do with how the game looks, but the characters and the overall feel of the game is just so charming it’s difficult to put down even in my brief stint with it.

When the demo ended, the couple next to me didn’t have much to say. They simply nodded and left. As if to say “Yeah, we’ll be buying this one”. Honestly, as it stands now, I don’t blame them.