Epic Games’ promised revision for its popular Horde Mode as part of Gears of War 3 was revealed at an event this evening at E3. An event where Ice-T’s Body Count will be performing. An event that I left almost immediately after I played about a dozen waves of the new mode, called Horde 2.0, so I could get back to a computer and tell you all about it.

Don’t say I’ve never done anything for ya’, considering I’ve had Body Count’s song “Evil Dick” stuck in my head since 1991.

The simple-but-brilliant concept of a “Horde” mode has been basically ripped off wholesale (by both third- and first-person shooters) since Epic introduced it in Gears 2 back in back in 2009. With Horde 2.0, Epic isn’t entirely reinventing the game, but it’s adding a few novel concepts that — once you try them out — you won’t want to live without. Horde 2.0 introduces the idea of fortifications and command posts. The concept was born out of the fact that in Gears 2‘s Horde mode, most players would steal Boom Shields from Boomers and set up defenses. With 2.0, they’re simply building that concept right into the game in a deeper way.

To start, players choose one area on a map they want to hold as a fortification. What you choose will depend on how you want to play, or what you think is going to work best for your team. In my hands-on with a map called “Hotel,” we set up a command post right outside the streets adjacent to what appeared to be a larger courtyard. As you progress, it’s possible to expand your “area of influence” by purchasing new (and expensive!) command posts, although we never got that far in my demo.

When the match begins, you’ll start with a handful of cash to spend on building up defenses, including barriers, turrets, decoys, and more. Epic predetermines ahead of time what’s placed where, marked by green outlines of the objects scattered about the map. As waves progress, additional cash is earned by way of kills and helping your teammates. Between each wave, you’ll have a small window of opportunity to upgrade or repair damaged objects before the next begins. These objects are also upgradable, so spending cash wisely and strategically planning your fortifications is key to success. One example of an upgrade I saw was the barrier — the first level was a short strip of caltrops, while the second was a taller barbed wire fence. Further upgrades, I’m told, will even include laser barriers that can act as offense as well as defense.

Even though tight cooperation was key in Gears 2‘s Horde mode, Epic has pushed it even further with Horde 2.0. You can now swap weapons and ammo, for instance. You can even combine cash to build up your fortifications faster.

Once thing I quickly noticed as I progressed through the waves is that Horde 2.0 features a more diverse line up of enemies than its predecessors. Epic says the mode will feature five different sets of creatures of the Locust and Lambent variety. Every ten waves (there are 50 total) you can expect to face a “boss” battle, so you’ll want to pace yourself for battles against the likes of the enormous Brumak and more. 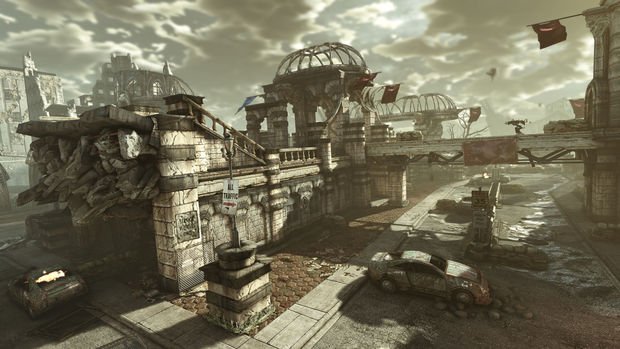 To keep things even more fresh for players, Epic is throwing in both Bonus Objectives and “mutators” into the mix. I only saw the bonus waves in action; one tasked us with getting a certain number of headshots in a limited amount of time. Successful completion of the task would reward us with additional funds, as well as bonus loot. As for the mutators, you’ll be able to use them to change up the game in private matches. Some of the mutators sound kind of ridiculous, but in the best ways possible — Big Head Locust mode, and even a sitcom-style laugh track.

Epic’s Horde mode was fun on its own, which is why other developers couldn’t seem to help themselves from yanking the concept for their own titles. Horde 2.0 is upping the ante with new features, multiple maps, and a theme song about the mode written and performed by Ice-T and Body Count. Seriously.

I don’t see where this can possibly go wrong.