Told you you shouldn’t have done that. My go

[Originally published in 2007, one of my favorites from Destructoid’s Golden Archives! -Niero]

It used to be a lot easier to stereotype a gamer. It used to be that all that was needed was some greasy hair, thick glasses, and a few faintly veiled allusions to terminal virginity in order for the lazy sitcom writers of the world to have a brand new supporting fall guy all written and ready to go. But that was in a less enlightened time, when gaming was unknown to the masses and the concept of actual normal, well-adjusted adults playing video games was unheard of.

Now however, everyone plays. Your siblings, your Mum, your Dad, your Grandparents, your boss, his boss, his secretary, and her cat with the bowel troubles. Everyone from foetus to corpse plays one manner of video game or another, and gamer archetypes are a lot harder to pin down.

With people from all walks of life coming to gaming from any number of countless perspectives, and all wanting to get something different out of the activity, it’s now impossible to classify someone just on the grounds that they play games. No, if you want to properly look at the various archetypes now involved in our favourite pastime, you now have to look more deeply into how they play games and what they’re getting out of it.

With this in mind, I have begun building an in-depth anthropological study of the modern video game player and his/her ways. Join me if you will, as with the occasional aid and input of my fellow Destructoid writers, I endeavour to shed light on the varying strains of this most interesting modern cultural phenomenon. You might meet yourself, and I virtually guarantee you’ll meet someone you know. And at the very least we’ll all get some cheap laughs at the expense of people probably not too dissimilar to ourselves. 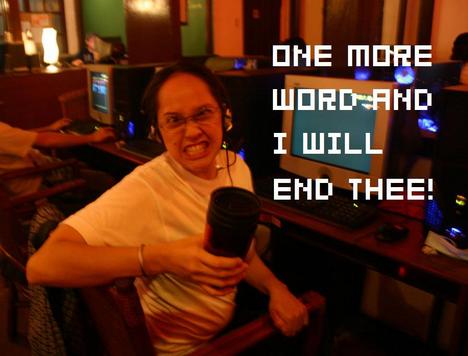 “No! Leave that! Go that way! Kill that guy! Circle strafe, circle strafe! Jumpjumpjumpjumpjump! Chainsaw, chainsaw! Rocket launcher on the guy at the back! NOOOOOOOO! Told you you shouldn’t have done that. My go.”

Think you’re a good gamer? Forget those aspirations my friend. You are not as good as this guy. He is at one with the games, symbiotically tuned with them in body and mind. He sees all, he knows all, and he will pre-empt any AI script created. Every map of every level of every game is seared into the very matter of his brain, and he can walk any section by simply closing his eyes and recalling his surroundings down to the pixel.

There are no surprises. There are no challenges. He laughs at player’s guides and devours opponents by the crunching meaty handful. He is, quite simply, unstoppable.

In his mind that is …

You see unless he’s actually playing, this guy knows everything. In theory he can destroy any game, rendering it to a small quivering puddle of blackening disc plastic by his sheer presence. In theory he’s the guy you want, no, need on your side. In theory, he skips straight to the most punishing difficulty level on a new game and burns through it in no time with his legendary gaming insight and lightning-fast precision skills. 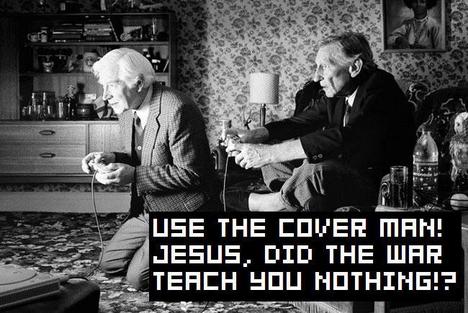 In practice however, the only recorded noise in human history louder than his militant bestowing of “advice” and proclamations of his gaming qualifications is the sound of the servers emptying whenever he enters a lobby. You see, the simple fact is, he’s not actually that good …

Oh of course, he can talk a good game. Some of his aspirations of game knowledge are probably even plausible. He’ll have played enough to learn level layouts, know where the power ups and weapons are hidden, and understand exactly where you’re supposed to hit the boss. That doesn’t however, mean that he can actually do it.

Thus, he will make up for his shortcomings (again, in his mind) by making sure that you know he could do it. Oh sweet Ghandi on a hover-board, he’ll make sure you know. Every move you make, you can bet he’ll be watching you like a video gaming overlord Sting, correcting you every time you move a pixel off the exact course he would have used. Change weapons or power up a second after he recommends it and you’re playing the game wrong and will fail. Achieve the miracle of success without following his instructions however, and well, you can do it that way, but you’re supposed to.

This is the reason people online know him and fear him. There’s no avoiding it if you have the miserable, Dickensian street-orphan’s luck to end up in a game with him. Whether co-op or versus, he’ll be the same. Whether commanding the team or merely controlling an underling, it doesn’t matter. He’ll let you know where you’re going wrong (and you will be going wrong, don’t doubt that for a second) for every step of the miserable, grinding, teeth-gritting, face-bursting, hernia-inducing, mind-raping, sanity-haemorrhaging way.

And that’s nothing compared to the supernova of aural abuse you’ll suffer if his team loses. Which it probably will, as by that point his comrades will have thrown the match just for the spectacularly horrific comedy of seeing him go into meltdown. 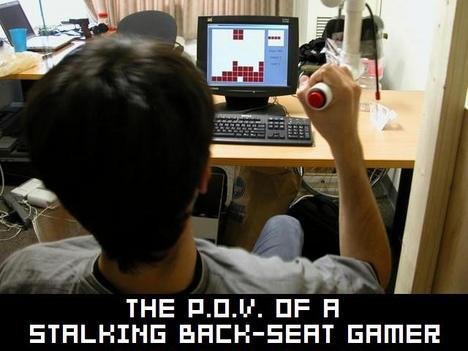 Anything. It doesn’t matter. He’s better than you at all of them.

If you’re playing anything, from Solitaire to Gears Of War, it’s best to be out of visual and sonic range of a back-seat gamer. Preferably in another room. Or another house. Country even. Actually screw it, if at all possible, you should endeavour to be in a totally different area of the space-time continuum to any back-seat gamer. It seriously is worth travelling in time to avoid these people.

And never play them at co-op anything, least of all FPS, as that way lies only Lovecraftian madness and despair. You’ll make it through three minutes of play at most before you end up shooting them. With an actual gun. You’ll go and buy a really big one specially, trust me.

A tragically repressed game lover, the closet gamer has not come to terms with the modern, accepting gaming climate.

It’s probably not their fault. Maybe they weren’t lucky enough to grow up with a supportive gaming crew around them. Maybe they were forced to spend their younger developmental years trying to fit in with an unsympathetic crowd, and had to hide their true urges by mocking the school geeks at lunch time. Or perhaps they had over-protective parents who fell victim to the tabloid hysteria of the early ‘90’s, and were beaten senseless with warnings of social ostracising and the deadly gaming-transmitted diseases of psychosis and epilepsy.

Whatever the reason, the closet gamer is a troubled self-hater, constantly struggling with his or her inner desires to break out into open gaming, for fear of the recrimination of a cold, cold society that just doesn’t understand.

I have a friend like this. His is a sad story, but it needs to be told, if only for the hope that it will help others in his situation.

He’s been game-curious for years, having the occasional quiet dabble in casual games when they were presented to him, but never allowing himself to be seen actively seeking them out. He’s always loved a bit of Tetris or a quick blast of Street Fighter II, but he’s never owned a console. However a couple of years ago while he was at university, his guard slipped and his true nature started to show itself for the first time.

Living in a house with an N64-owning friend, Mario Kart 64 became his gateway game and things began to change for him. Of course at the time, he passed it off as a mere temporary phase, a bit of harmless experimentation with an accessible party game. He was just trying it out to see what it was like, and of course, it didn’t mean he was a gamer. 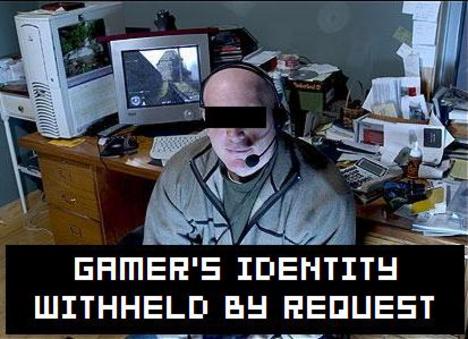 Over the course of the year however, the inner depths of the game began to take hold, and something inside him began to stir. His hardcore side slowly but steadily awakened, and after a prolonged diet of daily binges he was talking about power slide physics and correct item usage like a pro. Though he still wouldn’t admit to anything.

It all came to a head last Summer. His parents were away and he had the familial home to himself, so he invited me round for the evening. However what he proposed shocked me.

“Come around, bring the SNES, and we’ll get drunk and stay up all night completing Mario World”

This was unprecedented behaviour for him. Maybe it was the opportunity of being safely alone in his own house, away from the prying judgemental eyes of his university friends, and maybe the planned heavy drinking was his way of building up the courage to go through with it. Whatever the reason, it was clear that this could well be the night of his outing, and if it was going to happen, he’d need a sympathetic guide to help him through the process. Obviously, I deigned to be the friend he needed.

Everything went brilliantly. After a couple of beers, his inhibitions dropped quickly, and in no time at all we were ploughing through the first island. By 3AM we were well into the Vanilla Dome with all secrets unlocked, and a whole new world was opening up for him. His future life looked to be one of well-adjusted self-acceptance and healthy, peaceful happiness. 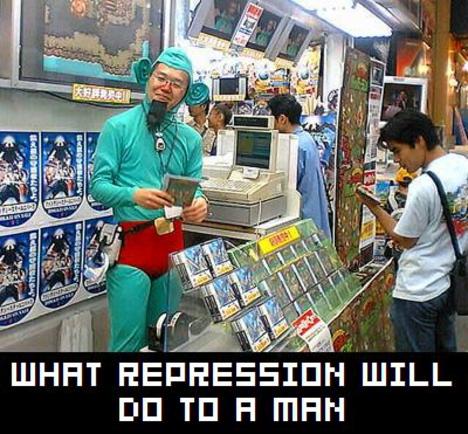 The next morning however, it was a different story. With sobriety and the cold light of day came his previous guilt and repression, worse tenfold now following our nocturnal activities. I don’t mind telling you it was an awkward morning. He couldn’t even look me in the eye for the first few hours, and even later in the day conversation was stilted at best.

Still clearly trying to come to terms with the events of the previous night, he’d fallen back on his safe-zone of denial rather than embracing who he is, and my disappointment for him was crushing.

Things are getting better now, and we are talking again, but it just isn’t the same.

I still have hope for his future happiness though. I’m currently using the casual fun of the Wii and DS to get him back on the horse, and the news that his new housemate is buying a 360 has warmed my heart. A bit of experimental co-op over Live, taken at whatever pace he’s comfortable with, and hopefully we’ll start seeing some progress.

Anything casual and quick, and easy to hide if interrupted. The odd bit of Tetris or Minesweeper at work is okay “just to unwind”, and retro games give them the excuse that they’re “just laughing at the graphics”. The advent of the DS is a major help for these people, given how quickly it can be closed and pocketed in standby mode should prying eyes arrive.

Don’t push them. Try to subtly bring them into more overt gaming over time, but do it with games and a pace that they feel okay with. Too much too fast and they’ll retreat into their shell faster than an agoraphobic snail at a rave.

And never use leet-speak around them. Simply being in the presence of someone who uses the word “owned” will sent them spiralling down into more counselling sessions than anyone can afford. They’re not going to be ready for that kind of heavy exposure to the hidden world they crave for a good long time, so don’t rush them.

Next week: Chavs!  (view all chapters)

Filed under... #A Guide To Recognizing Your Gamers#Fashion#Things gamers do#Top Stories