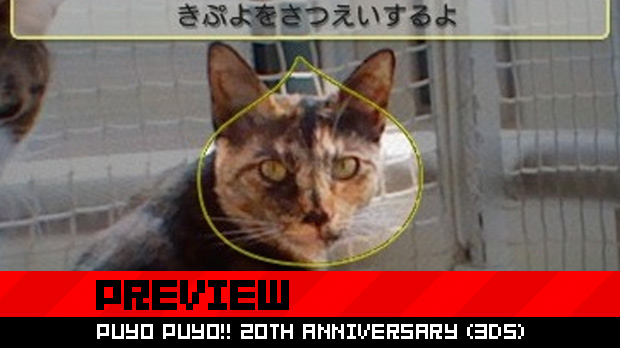 I have a long love affair with Japanese falling block puzzle games. Although Magical Drop and Money Idol Exchanger are my favorites, Puyo Puyo has a place in my heart for being the first one I loved. It’s a classic that has stood the test of time. Most of the previous variations in the series hold up well enough to make a new entry feel a bit unnecessary.

Sure, it’s the 20th anniversary but that’s no reason to make a new game, especially when you consider that Puyo Puyo 15th Anniversary edition already summed up the history pretty well. After getting a couple matches in with Puyo Puyo 20th Anniversary on the 3DS, I’ve quickly changed my mind from “uh” to “wow, this game is great.”

While it’s not quite the reboot Namco have given to Pac Man and Space Invaders, Puyo Puyo 20th Anniversary breathes new life into the series by improving the interface, speeding up the game and throwing in crazy, new modes.

For those unfamiliar with the series, Puyo Puyo is a matching block — well, blob — game where you connect four of the same color in an effort to reach a high score or unleash your wrath on an opponent. The 20th anniversary release contains all the best modes throughout the series’ history, tallying up to a whopping count of 20, including eight new modes.

The demo match was locked into the classic fever mode, which has always been my favorite. This edition is much more user friendly, giving you direct feedback by lighting up same color blocks below your held blob piece. This is especially useful for color blind gamers. It also presents dots laying out how exactly it will fall when you let go. These are small details but when making split-second decisions, it helps keep the mayhem in perspective.

Speaking of perspective, the 3DS version of the game (the DS version was released in Japan a month ago) is, as you may have expected, in 3D. It doesn’t look all that great, but an even bigger problem is the resolution of the battle screen. The playing field is shrunken down, with a border surrounding it — not something I expect out of a portable game already running at a low resolution.

I haven’t played the original DS release (or the upcoming Wii companion), but the 3DS version is looking to become the definitive portable release of the series. It’s disappointing that the 3D isn’t better and the playing field is so small, but these things hardly get in the way of what is otherwise portable puzzle game perfection.