While Capcom is yet to announce a street date for its fantastic-looking scrapper Street Fighter 6, an unfortunate leak on the PlayStation Network appears to have done the job for them — suggesting that the highly anticipated sequel will hit PC and console platforms on June 2, 2023.

As spotted by Twitter user @SurpriseBurn, the temporary PSN page not only featured both a date and pre-order windows for three editions of Street Fighter 6, but also brand new splash art, depicting poster boy Luke at his most Popeye-looking ass. A release date is offered as “06/02/2023”, with a USD amount suggesting that this is the U.S. depiction of the calendar.

A Standard, Deluxe, and Ultimate Edition of the fighter is listed as available to pre-order, with the Deluxe edition featuring a “Year 1 Character Pass” and the Ultimate Edition featuring a “Year 1 Ultimate Pass”. Curiously, all three pre-orders include an additional color, but for only six characters. While some have suggested, bizarrely, that this means SF6 is launching with only six characters, Capcom has already confirmed an 18-character launch roster. 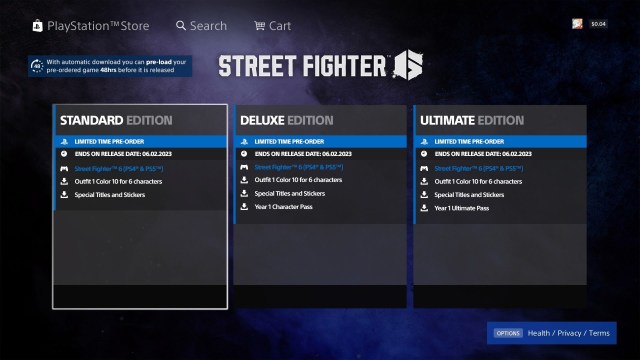 With The Game Awards taking place this evening, and numerous titles rumored to be announcing their launch dates, we might hear more on Street Fighter 6 in just a few hours time. June is, admittedly, very late in the day for a new SF release, (with fighters typically releasing early in the year to catch the FGC season). Still, Street Fighter V launched early, and in doing so saw one of Capcom’s worst-ever launches from a critical and player perspective. June feels forever and a day away. But we can wait.

Oh, and don’t forget there is still time to sign up for the second closed beta, taking place December 16.

Street Fighter 6 launches on PlayStation, PC, and Xbox in 2023. Be sure to check out our other reports on the game in its current state, 50 things I loved about the beta, as well as CJ Andriessen’s experience with the Modern control system, and a list of Do’s and Do Not Do’s for the new sequel.