Dumb it down for me

One of the most significant and recognizable changes in my gaming habits over the past 30 years has been my slow retreat from the fighting game genre. Mind you, I was never really into the FGC, having participated in one entire tournament in my life when I was very young. But like many of those who came of age during the original console wars, Street Fighter II and its various iterations integrated itself into my life, my leisure time, and my many playground conversations with friends. We shared strategies, talked up our favorite characters (Cammy here), and convinced each other that the lies of secret characters we heard from the older kids were totally true but we just weren’t skilled enough to access them.

I spent many of my school years attempting to get good at Street Fighter, Tekken, and TMNT Tournament Fighters. I never really did, maxing out at what I’d label “adequate.” And I was fine with adequate, really. That was a decent middle ground for somebody who knew the controls and some combos but didn’t have the time to fully sink his teeth in.

To actually maintain my adequate level, I’d have to play with some regularity. But as I traded velcro shoes and Mead Peechee folders for dorm rooms and an eventual career, I discovered I no longer had the time to actually learn how to play a game. I didn’t have it in me to spend weekends remastering a six-button control scheme while learning intricate new combos and often confusing specials. I needed games to come ready to play for me, where everything I needed to know could be picked up in a matter of minutes rather than a matter of days. I guess that’s why I played a lot of Mortal Kombat in those years. 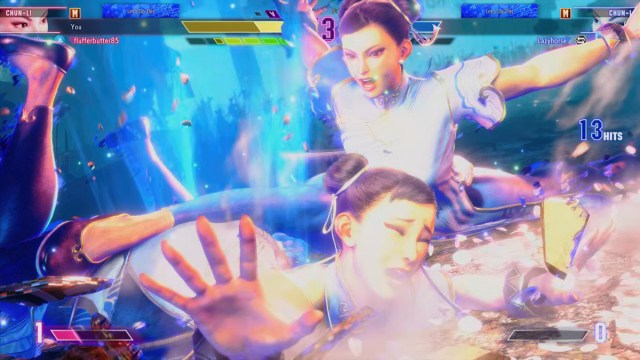 It was pretty easy for me to forget about fighters in the aughts as the genre seemed to be limping along on its last leg. It was a dire time, those days, but when Street Fighter 4 hit, all those schoolyard memories shot to the forefront of my mind. Seeing the trailers for it made me feel like a fearless eight-year-old again, but when I dared to give it a shot on the 360, I realized I’d never be able to capture the youthful energy I once had for the genre. I was a working man at that point with an often unpredictable schedule. As much as I loved the look of characters like Sakura and C. Viper, I knew I wouldn’t have the time to work my way back up to an adequate level again.

6-buttons! In this economy?!

The first traditional fighting game to pull me back into the fray was 2010’s Tatsunoko Vs. Capcom: Ultimate All-Stars on the Wii. Unlike the 2D fighters I remember from my past, it dropped the six-button set-up in favor of an impossible-to-forget three-button scheme. I know other games, like Marvel vs. Capcom 2: New Age of Heroes, took steps to simplify the fighting game formula, but there was something about TvC’s schematic that clicked with me in a way no other fighter had. For the first time in a long time, I found a way to build myself up to adequate once again. Tatsunoko Vs. Capcom changed my entire outlook on fighting games and opened my eyes to the other titles on the market that were attempting to make the genre more approachable.

Games like Dragon Ball FighterZ or Melty Blood: Type Lumina or Them’s Fightin’ Herds all eschewed traditional fighting game controls in favor of something that could be labeled “Easy to Learn, Hard to Master,” which is exactly what I’m looking for these days. Games featuring these simplified controls are the ones I’m going to gravitate toward, even if those titles never go mainstream or I don’t really care for the IP they’re attached to. I guess that’s why I’m so damn happy that arguably the biggest fighter in the world is modernizing its controls for a filthy casual like me. 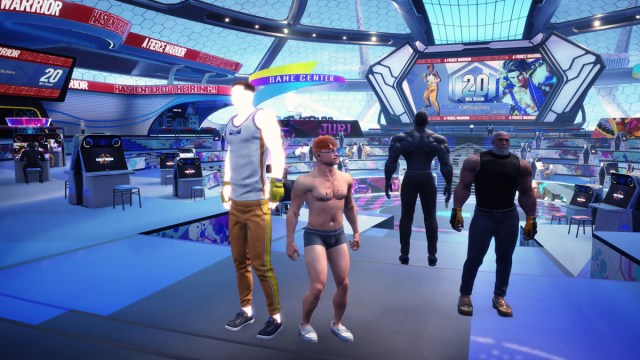 Over the weekend, I was lucky enough to try out the closed beta for Street Fighter 6. Our own Chris Moyse has already rattled off a list of the big and little things that made the beta so great, and I would parrot every single entry on his listicle. I loved doing the spinning bird kick off the second floor, changing up my New Challenger screen (which not enough people did), and really appreciated being able to bow out of a match with a poor connection. I think the hub area itself has a lot of potential with everything from event concerts to seasonal photo booths being possible if that’s what Capcom has in store.

All of that was fine and dandy, dandy and fine, but the highlight of the weekend was getting to test out the new Modern Controls option. With the Classic Controls, you have the standard Street Fighter set-up that I imagine most long-time players won’t stray away from. With Modern Controls, almost everything has been simplified into four buttons: light attack, medium attack, heavy attack, and special attack. Once I actually realized the beta made Modern Controls the standard, it didn’t take long for me to gel with each available fighter. I got my first win with Guile and then quickly racked up more dubs with Juri, Jamie, and Chun-li. Jamie actually ended up as my favorite fighter of the weekend as the flow of his moveset worked so well with the Modern Controls, though I did try my best with Kimberly because her design is overflowing with personality. 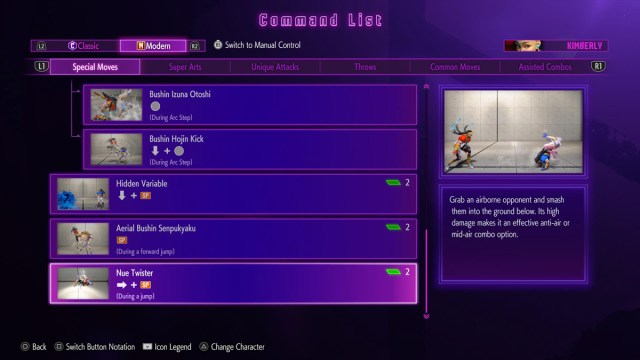 Because of how the controls simplified the experience, I was more eager to try out all the fighters than I would have been otherwise. Being able to jump from Ken to Jamie wasn’t as significant of a leap as it might have been in the past with the traditional set-up, and certainly not something I would have been all that keen to do in such a short window. If not for the Modern Controls, I would have probably just spent the entire weekend playing as the first character I picked up. In fact, with the approachable controls, I doubt I would have won any fight at all, let alone the dozen or so I did.

Modern or Classic, I’m still garbage at the game

Don’t get me wrong, I got my ass thoroughly kicked throughout the weekend. People playing with Classic Controls, which is noted by a little icon next to their fighter portrait, routinely wiped the floor with me. One even managed to get a perfect round in, which wasn’t a high point of the beta. But even when I lost, in a majority of the matches, I was able to hold my own with each of the available fighters. I didn’t have to stick with who I was best at—Juri, in case you’re wondering. Instead, I felt encouraged to sample; to shop around a bit until I found out just who complimented my abilities the best.

And that’s what I love about Modern Controls. When this game launches next year, I’ll be able to go through the entire cast without feeling lost whenever I pick a new fighter. As long as I have the basics for one, I have an understanding of them all. That right there is the difference between me buying this game down the line and buying it on day one. 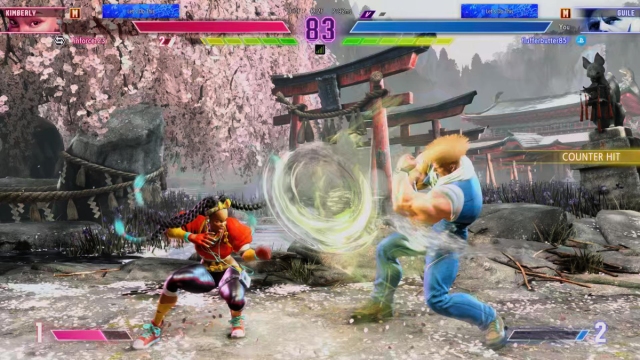 It should be noted that while much of your fighter’s repertoire has been condensed to the face buttons on your controller when using Street Fighter 6’s Modern Controls, there is variety in how you actually pull off their moves. For some fighters, attacking with a special is as easy as pressing the Triangle Button and a direction on the control pad. Others are slightly more involved. Guile, for instance, will require you to hold back for a short time if you want to throw a Sonic Boom, just as you do with the Classic Controls. Chun-li’s Kikoken is the same way. Characters may also have moves that don’t use the special button, like Kimberly’s paint-bomb shurikens or Chun-li’s Spinning Bird Kick. Those require a traditional input even with the new configuration.

Like I said above, I need my games to come to me ready to play. I don’t have enough spare time to invest in a traditional fighting game because I’m the idiot who keeps volunteering to review 50-hour JRPGs on this website. Don’t get me wrong, I still buy the traditional fighters, especially with all the compilations Capcom keeps shoving out. I just don’t play them. If I’m playing a fighter these days, it has to be pick-up-and-play. Street Fighter 6 isn’t something I’m going to play so I can make it into tournaments or wedge myself into the FGC. It’s going to be a game I play for fun, to complete the single-player mode, to make an avatar that is hot AF, and maybe take it online one or two nights a week.

As a filthy casual, that’s all I need from this game. And if you’re someone who takes their fighting games very seriously, don’t worry: you’ll still kick my ass if we’re ever paired up online. At least until I learn how to use that glowy body thingie or that color woosh smash move that people kept using against me. ‘Cause that shit was annoying and I can’t wait to spam it against y’all.