This Metroid tribute does more than suck off its source material

[Renegade Kid contributed to “Sup Holmes?” a show hosted by Jonathan Holmes that had a separate Kickstarter unrelated to Destructoid, but is featured on the site.]

A lot of the kids who grew up with Metroid, Super Mario Bros., and The Legend of Zelda are now older than than their creators were when those legendary Nintendo franchises were first released. Some of those kids are now videogame developers themselves. Jools Watsham of Renegade Kid is one example. He created Xeodrifter in five months, fueled by financial stress, time constraints, and a raw love of Super Metroid. You can read about his process here.

Showing your Metroid DNA on your sleeve is a blessing and a curse. It instantly communicates to the relatively large Metroid fan base that your game was made for them. It also sets the bar incredibly high. Begging for a comparison to Super Metroid is a dangerous thing. As we saw with the reaction to Other M, a disappointed Metroid fan can be an intensely spiteful force.

My guess is Xeodrifter won’t inspire that kind of caustic reaction in the Metroid faithful. If it were an official Metroid game, it would rank near or above many of the other games in the franchise. As long as you go into it expecting something short and sweet, it’s hard to imagine that Metroid fans will be disappointed.

Feeling trapped on a strange alien world, forced to push forward despite your fear of the unknown. Being rewarded for your bravery and ingenuity with new abilities that allow you to traverse obstacles and overcome challenges that would have been impossible before. The mixture of intimidation and fascination that you feel every time you enter a strange new environment. These are the things that define the Metroid series for me. They are also the core design principals of of Xeodrifter. In case you hadn’t picked up on it yet, the game is inspired by the Metroid series. Seriously guys, it really is.

In some ways, it pushes those themes farther than 2D Metroid games have gone before. From the outset, you can explore four different worlds, traveling between them in your broken-down little spaceship. You’ll quickly find that you can’t get very far in all of them though. Discovering through trial and error which planets to explore after obtaining what upgrade defines the general flow of the game. 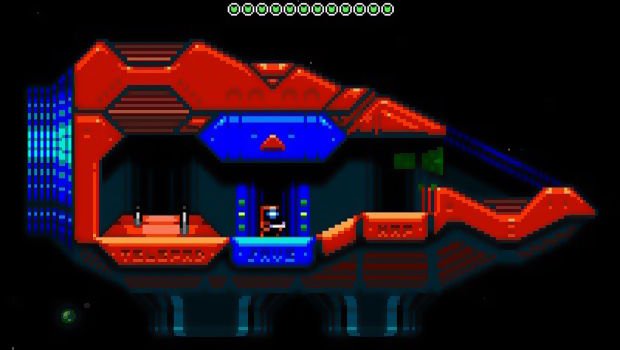 The flow may be similar to Metroid, but the details are largely different. The first upgrade you obtain allows you to turn into a little submarine and explore the briny, alien depths. That’s something Samus has never done, though it is similar in spirit to the morph ball that she acquires first in many of her 2D titles. Right off the bat, you’re given a power-up that inexplicably allows you to transform into something that people generally can’t transform into. It’s a nice way to set the tone for the rest of the game, establishing that anything is possible in this world of interplanetary exploration.

Some of the power-ups you get later on are a little more similar to those found in the Metroid franchise, though you use them in different ways, often times in tandem. There is a super-run power-up, but instead of using it to destroy blocks and clear rapidly closing doorways, you use it to run across deadly space lava. There is a super jump too, but you don’t need to run in order to charge it, and as such it’s a little more practical and user friendly. 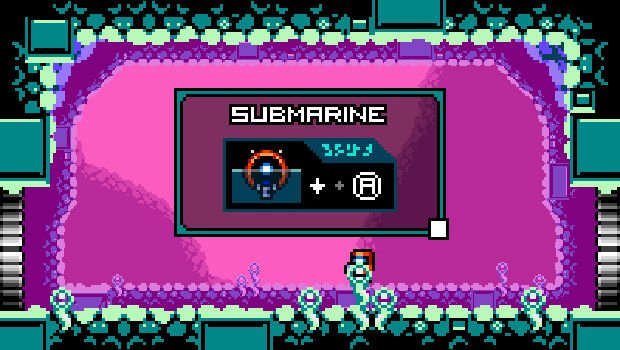 The ability to jump in and out of the background from Mutant Mudds is here too, and it feels a lot more useful this time around. Assuming there is an inhabitable backdrop to jump into, you can use the ability at any time, making it the most effective method to avoid incoming attacks, though you’ll have to deal with the disorientation of suddenly appearing in the distance in the process.

This ability is most useful in boss fights, which follow the Metroid 2 rule of pitting you against the same recurring enemy who gains more attacks and HP with each encounter. These boss fights are also where you acquire your power-ups, adding to the sense of climax each time you discover one. There are very few health pickups and checkpoints in Xeodrifter, which can lead you to feeling desperate and scared quickly.

Thankfully, the game has a fine display of “gore-shadowing” that allows you to grab health and soft-save your game before every boss fight. These fights get pretty complex, layered with different patterns, leading you to feel both attached to and daunted by your old foe. While I’d love to see a wider variety of boss encounters in a new Xeodrifter title, I’ll always have a soft spot for the giant alien baby crab thing that killed me so many times in this outing. 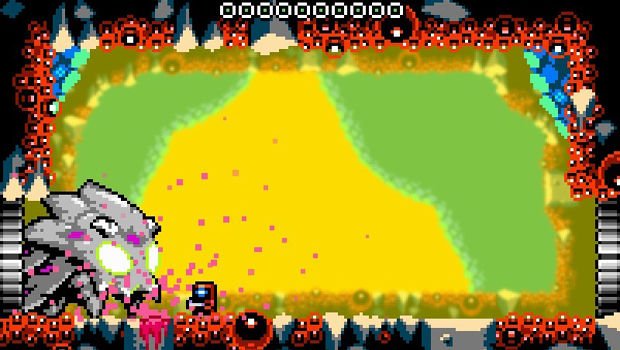 The weapon power-up system in Xeodrifter works as another upgrade/tribute to past Samus adventures. Remember how in Super Metroid you could turn on and off weapons and upgrades after you acquired them? It was a cool idea, but was poorly balanced. One you got a power-up, it was never a good idea to turn it off, unless you just wanted to show off your amazing solo-Spazer skills to family and friends. Xeodrifter takes the option to turn weapons off and on and makes it worth something.

Instead of acquiring new guns, you gain upgrade units that you can apply to any of five bullet properties, allowing you to mix and match. For instance, put two units on the wave beam-style upgrade and three on your bigger damage option, and you end up with a beam that’s a little wavy that does medium damage. Put all five units on bigger damage, and you have a tougher bullet with no waviness to speak of. Balancing bigger damage with wider range seems to be the best way to go, though I imagine speed runners may find a way to make other combinations more effective. 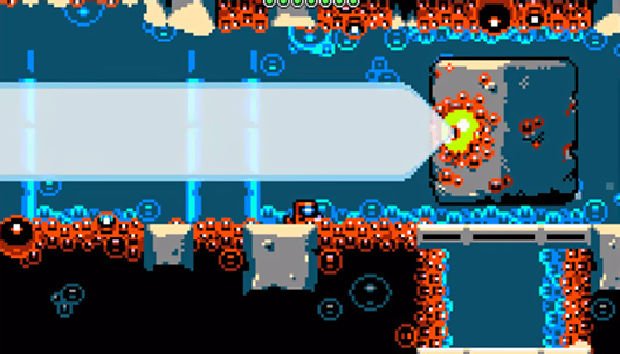 There are still secrets for me to find in Xeodrifter, as I haven’t found all the health and bullet upgrades yet. They tend to be found through intangible walls and floors that are strewn about at random, so it will likely just take a bit of hunting before I get them all. Chances are I won’t bother, but I’ll definitely play through Xeodrifter again in the future, after I’ve forgotten most of the details about it so that the experience will be fresh in my mind again.

Like the Metroid titles that inspired it, the music, graphics, and world/enemy design are more than worth revisiting a few times a year. This may be Renegade Kid’s best game yet, despite its relatively short length. I hope this isn’t the last time we’ll be invited to adventure with this mysterious new space explorer. Were they secretly a girl the whole time? Hopefully we’ll find out next mission.