Sharpest tool in the shed

Level-5’s Guild series started out as a bizarre anthology of pint-sized experiences from industry veterans. Initially released in Japan during the spring of 2012, the package would come to western shores later that year. Well, sort of. It was dismantled, shipped across the ocean, and sold piecemeal via the Nintendo eShop.

One by one, the games trickled onto the handheld’s online store — with one notable exception. Weapon Shop de Omasse was oddly absent. For more than a year the final piece of the puzzle remained on the back burner, that is, until now. Better late than never. 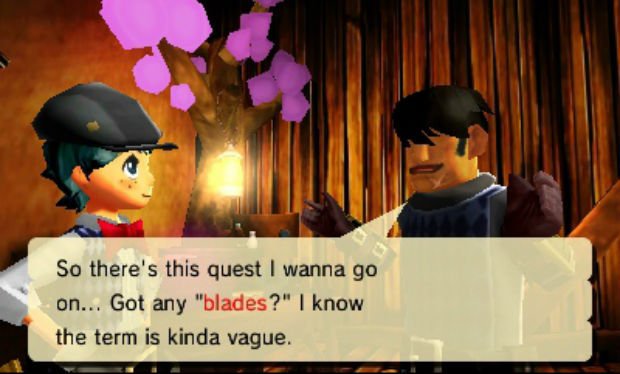 Weapon Shop de Omasse puts a new spin on saving the world. It takes a page from titles like Recettear: An Item Shop’s Tale, playing off classic role-playing games by focusing on unsung heroes: the humble storekeeper. This time around, you’re put to work in a family-owned smithy wherein you’ll get a behind-the-scenes look at fantasy adventure whilst crafting weaponry for any would-be heroes that pass through your doors.

Unlike the other titles in the Guild series, Weapon Shop de Omasse doesn’t come from a high profile director like Goichi Suda or Keiji Infaune, but that isn’t to say the creator isn’t famous in his own right. The title comes from Yoshiyuki Hirai, one half of the comedy group American Zarigani. Does that seem odd? Most definitely. The frontman’s humor definitely works in the game’s favor though. And the rest of package isn’t half bad either. Actually, it’s pretty great.

I suppose I should mention that this is a rhythm game. The basic gameplay boils down to tapping the Nintendo 3DS’ touchscreen, simulating a hammer striking sheets of molten metal. Players will strip away excess material, pounding away to a beat, while weapons begin to take shape. 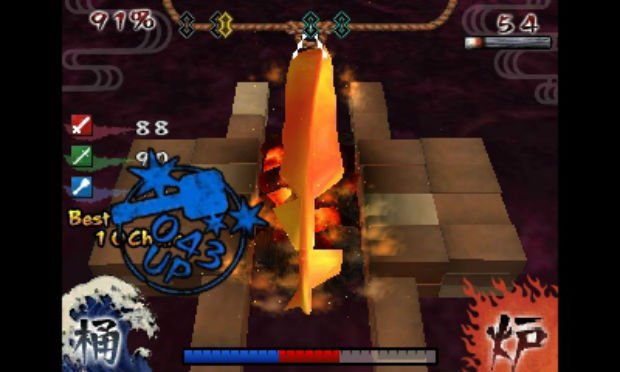 In addition to keeping time, players will need to move the stylus around the screen and trace out the form of a spear or axe — or what have you. Piled on top of that is a temperature gauge that can be controlled with fire and water, adding a third layer of complexity to the experience. How well you manage to fire on all these cylinders will have an impact on how a project turns out. A weapon’s critical hit rate, durability, special properties, strength, and sharpness all depend on your ability to multitask during the smithing process.

Producing quality work is definitely in your interest. You’ll be renting your creations out and customers only pay after successfully returning from a quest. Should they fall in battle, well, say goodbye to that shoddy sword and any payment you were planning on receiving. More often that not, though, heroes will return with a stack of money and some new materials you can put to good use making more awesome stuff.

In terms of the music accompanying all the hammering and polishing, it’s kind of all over the place. There are some winners, like the God Hand-esque piece sampled in the trailer below, but the soundtrack is generally pretty forgettable. Along with the equally decent, if somewhat lackluster, visuals, the beats are one of the weaker aspects in an otherwise exemplary package.

The real star of the show is the story and characterization. Weapon Shop de Omasse plays with the conventions of a JRPG, constantly poking fun at familiar tropes in a tongue-in-cheek fashion. The experience is just saturated with pithy remarks and clever dialogue that will have virtually anyone with any sense of familiarity with the genre chuckling in no time.

It’s pretty clear that this game was created by a comedian. And that’s part of the reason why it took so long to make the jump to western shores. The sheer amount of text in the game is pretty astounding, considering the size and scope of the Guild games, but localizing humor can be a daunting task. It requires far more than a quick and dirty translation. And it’s clear that Level-5 cared enough to take its time and create something special. That dedication really shows in the writing.

Weapon Shop de Omasse‘s colorful cast of misfits is what makes the game such a joy. The regulars at your store all seem to have an abundance of character and back story, whether its a samurai whose swords were confiscated at customs or a nondescript NPC making self-deprecating remarks about how he spends his days walking back and forth around town. 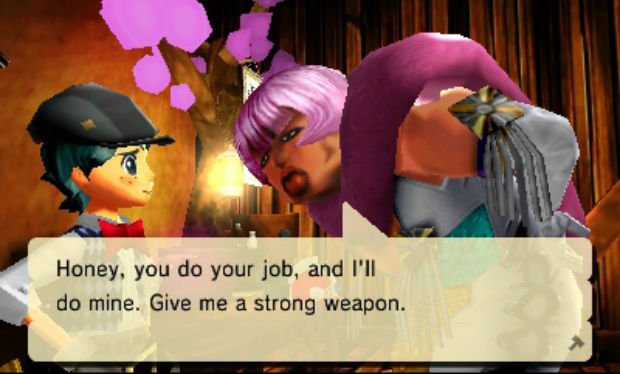 While most of the hilarity occurs within the friendly confines of the shop, there’s an amusing in-game version of Twitter that’s sure to dispense a few laughs as well. The Grindcast provides an ever-present feed of updates from your customers as they’re out in the field.  You’ll be able to track their sagas and see their inane thoughts on how things are going.

Complete with hashtags and all, Grindcast provides an ever-present feed of updates from your customers as they’re off questing with your weapons. You’ll be able to track their progress and see their thoughts on how things are going, which provide commentary on JRPGs that should bring a few chuckles to fans of the genre and detractors alike. It’s really quite charming.

Weapon Shop de Omasse is a breezy rhythm game, brimming with humor targeted at JRPG fans. I realize that’s a niche within a niche, and it certainly won’t be for everyone, but I loved it. And if that bizarre concept sounds even vaguely interesting, I bet you’ll love it too.