Will you be my tomodachi?

Nintendo catches a lot of flak for relying too heavily on its established franchises. Though it has been producing new properties, few have gained traction among hardcore gamers since Pikmin. Tomodachi Life might be overlooked for the same reasons. Its use of Miis and its nebulous gameplay could lead to some labeling it as too casual.

Do not fall into that trap. Tomodachi Life is one of the best Nintendo games in years. 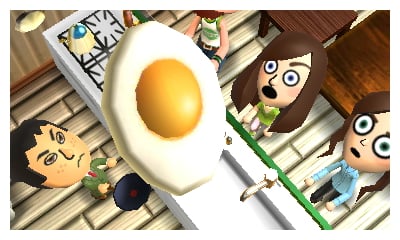 “Tomodachi” means “friend” in Japanese, and Tomodachi Life is all about getting together with friends. The player acts as a sort of omniscient overseer of a developing island, which is populated by several Miis. Each Mii is assigned certain personality traits in addition to his or her physical traits, and these loosely govern the interactions between Miis.

The player does not directly control any one islander, but can often influence events one way or another. For instance, one of my friends was falling in love with a creepy Mii named Lucifer Von Hades, and I told her that it might be a bad idea. Her feelings were a little hurt by it, but she refrained from asking him out.

Otherwise, the denizens of the island sort of go about their business on their own. They can often be found in the park playing with one another, taking long walks on the beach, or just hanging out in their apartments. Most of the interaction — and most of the gameplay of Tomodachi Life — occurs when talking to Miis inside their apartments. 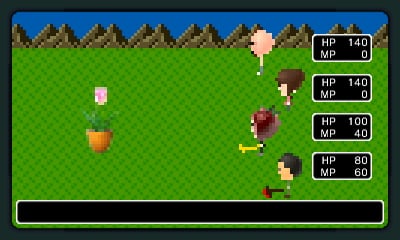 As items are purchased, players fill out the catalog and can order those items at any time, so long as they have the money. Each Mii has favorite and least favorite foods, which will either make them especially happy, or particularly disgusted. As more Miis move to the island and more problems are solved, more locations open up for new activities.

Boiled down to its essence, that is it. Make people happy, get money, buy more stuff to make more people happy, and repeat. What makes Tomodachi so much more than just that are the breadth of wacky activities, and the deeply personal nature of using one’s own friends and family as residents of the island. 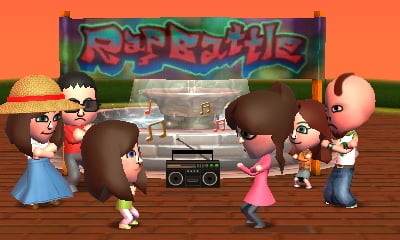 As far as the former is concerned, it is difficult to even know where to begin. Islanders will wear ridiculous costumes. They will get the hiccups and roll around on the floor. They will sell protein shakes near the fountain. They will blow bubbles in the park. They will accidentally iron themselves flat. They will have bizarre dreams. They will star in a very basic turn-based RPG. They will turn into metal and melt away. I am sure they have even more strange activities to engage in that I have not yet seen. This is the kind of totally nutso weirdness that somehow fits Nintendo so perfectly.

What puts it over the top is the encouragement to use one’s own friends and family, or celebrities, established characters, and historical figures. Sure, a rap battle between two Miis is funny on its own, but it becomes downright hilarious when it is between a significant other and Aeris Gainsborough. I have two friends who I have been trying to get together romantically, in real life. Imagine my utter joy and delight to have in-game Jim Sterling dress up in a bear costume and enact a secret plan to get their Miis together on the island. My mother sometimes mispronounces words, so every time her Mii puts her hand on her hip and confidently says her catchphrase “artesian bread,” I cannot control my laughter. 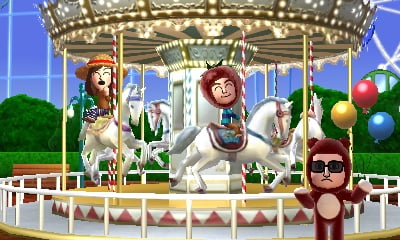 Imagining the people who I know and love in these situations is insanely entertaining. I found myself laughing for minutes straight at times. Tomodachi Life knows that it is built on creating off-the-wall memories, and it comes with native screenshot functionality. Since most of the action is controlled via the touchscreen, the buttons are free to take shots at any time. The X button will snap the top screen, and the Y button will grab the bottom screen, both saving to the SD card. With only a couple weeks worth of playing, I have built up dozens of screenshots, each representing an event or situation worth putting in the history books.

The only real bummer is the lack of options for same sex relationships. Part of the enjoyment comes from seeing which Miis end up dating one another, and it can be jarring at the very least to see a friend in a relationship that goes against who he or she is. I can only imagine what it would be like to be that person.

In all, Tomodachi Life is filled with pure, unbridled joy. It puts a stupid grin on my face and keeps it there through its duration. Some might complain that it is “not a game,” but they can go on hating. It does require the player to put in some love, flair, and wit, but what comes out is magic.