Theatrhythm: Final Fantasy was a very nice surprise. After many people had become disenfranchised with the series due to a number of mishaps and weak core entries, Theatrhythm reminded us that Square still had reverence for all of its classic characters, and of course — its timeless music.

As a sequel, Curtain Call doesn’t really change a whole lot from its predecessor, shortcomings and all, but it does pack in a whopping 221 songs on top of the already winning formula. 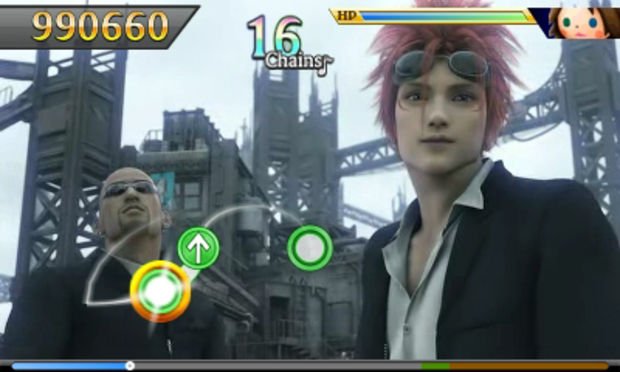 For reference, the original Theatrhythm only came with roughly 76 songs — more were available as DLC, and the iOS version actually had more tunes than the 3DS iteration. Since Curtain Call has 221 base songs before DLC, it’s already a major upgrade in terms of the setlist.

In case you’re worried about being lost in the sequel — don’t be. Curtain Call not only includes nearly all of the original songs from the first game, but it also recaps the “story” and introduces the new one in just a few minutes. Once again the evil force known as Chaos is back (described in part due to the “cyclical nature” of the universe), and you’ll need to amass Rythmia currency again to stop it. That’s literally it — even Mario has a more elaborate setup.

What you’re doing to be doing the vast majority of the time is playing songs, and they’re all played with the same three styles, just different delivery systems — versus mode, free play, and Quest Medley. If you haven’t played Theatrhythm before, the concept is very simple to pick up — there will be notes coming in from the side of the screen, and when they hit the target near your character, you tap or press a certain button (both stylus and traditional controls are supported).

Sometimes that action may just be a timely tap, in other instances it’s a “hold,” or a “swipe” in a certain direction. The three song types (combat, field, and event) change up the delivery system, but in essence it’s all the same idea. There are a few small additions like critical strike icons adding more impact to notes, but Curtain Call plays nearly identical to its predecessor — which can lead to some fatigue after extended play sessions.

As previously stated, Curtain Call doesn’t really fool around with giving you the keys to the kingdom almost immediately. After a quick tutorial you’re off to the races, picking a party of four from a number of core Final Fantasy games. This will serve as your character pool for the near future, as the others are removed to be unlocked at a later time — so make it count!

Your initial choice will also serve as your intro setlist, and each “franchise” you choose to represent with your party will have their songs unlocked from the start. Don’t fret though, because within an hour’s time, you’ll have nearly every song in the game unlocked. As such, free play feels like the core mode of the game, and less of a chore to slog through. No more grinding to get to the good stuff. 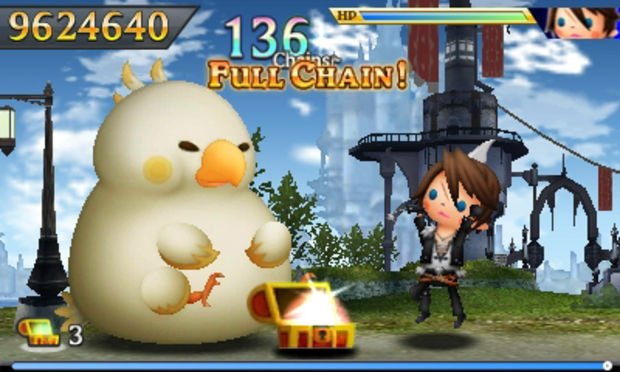 Having said that, the game’s RPG mode, Quest Medley, is not as quick to hand over the goods. Initially Quest Medley starts off looking great. With a world map to lightly explore (complete with classic world map overtures) by choosing paths, items to collect, and bosses to fight, it looks like a very cool way to implement more RPG elements into the fray.

The problem is almost every song for at least five hours is remedial, and it takes forever to get to the final difficulty level where the challenge truly begins.There are hundreds of quests available it seems, and after completing roughly 20 of them I promptly went back to free play, as well as versus mode — which you can also play by yourself thankfully.

In addition to local play, you can also challenge AI in versus mode, working your way through bronze, silver, and gold classes (as well as an extra tier). The way versus works is nearly identical to every other mode, with one exception — power-ups. By earning a certain score you’ll unload an “EX Burst” on your opponent, which can result in anything from flipping their arrows around, to making it harder to earn a score, to hiding notes until the very last second. 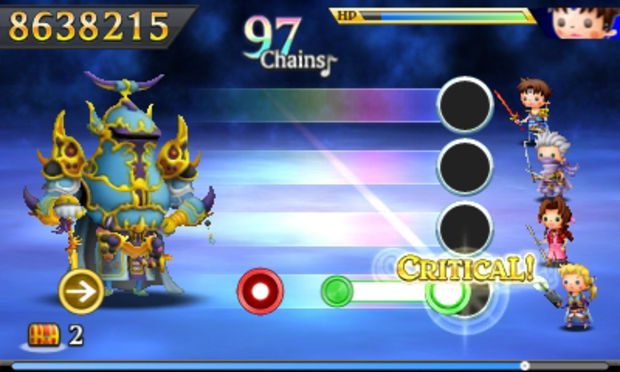 Because of this, playing songs on the highest difficulty is even harder, and this is likely where veterans will end up after exhausting every song in free play. Still, with enough resolve, you can work your way through the entire AI gauntlet in a few hours. It’s good then that versus has both local and online functionality.

In terms of the setlist itself, it’s extremely impressive. My personal favorite classic addition is Final Fantasy Tactics, but I really enjoy the fact that Lightning Returns and Final Fantasy XIV: A Realm Reborn have gotten a lot of love, as the soundtracks to both are two of their strongest suits. It’s also nice to see Mystic Quest remembered (even with just a few songs), and the upcoming DLC schedule takes more chances, with Chocobo Dungeons and Romancing SaGa appearances.

It’s still as addicting as ever to unlock just one more song, character, or quest map. There’s also more choice as to what you unlock, as earning enough shards will grant you the ability to choose from a list of characters to add to your band of heroes — instead of just giving you one. It’s going to take quite a while to go through every song on all three difficulty levels, and that’s not including browsing the museum mode or playing with friends. 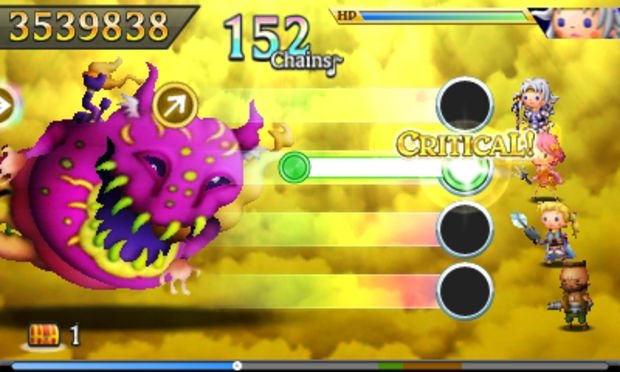 Considering that it has almost the entire first game housed within it with expanded modes, Theatrhythm Final Fantasy: Curtain Call is a no-brainer for people who never bit the first time around, as well as returning players who are looking to play some extra songs. It still has some of the same series trappings due to its similar nature, but even if you just tackle every song once in free play it’s worth the price of entry.