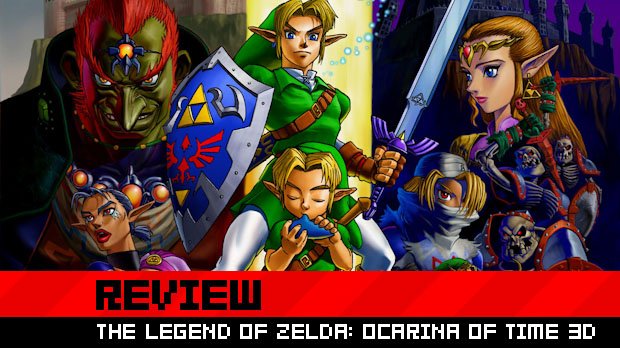 The Legend of Zelda: Ocarina of Time is a powerful game. It’s a game that, once it sinks its claws into a gamer, never lets go. Equal parts innocent and morbid, charming and disturbing, silly and melancholic, Ocarina of Time is an enduring classic for a reason — few games dream of being so iconic.

Ocarina of Time is comprised entirely of things so unforgettable that the mere mention of them instantly throws up recollected experiences that have been seared into one’s brain. The haunting face of the Happy Mask Shop owner. Escorting the princess through Jabu Jabu’s belly. Stepping into a future Hyrule market for the first time and witnessing the devastation of Ganondorf’s influence. Ocarina of Time is a game of memories.

To carry those memories in one’s pocket is, to me, far more important than enhanced graphics and refined gameplay elements. That Ocarina of Time 3D provides those things too? That’s just icing on a very wonderful, very delicious cake. 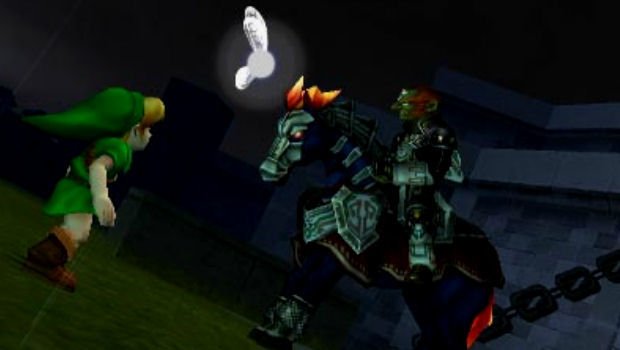 It’s difficult to review The Legend of Zelda: Ocarina of Time 3D simply as a game, because it’s a game most of you have likely played many times since 1998. At its core, this is the same Ocarina of Time that you remember from the Nintendo 64 era, with all its charm, and all its 1998-era design.

Focusing simply on the game’s enhancements, it has to be said that the graphics alone make this the definitive version of Ocarina of Time. Characters are so much more detailed, with far superior animation, and the notorious “Vaseline” effect applied to background scenery is nowhere to be found. Many of the buildings have been given extensive redesigns, bringing Hyrule to life with greater intricacy and more color. I won’t go as far as to call the game beautiful, but it’s undeniably prettier in its new clothes.

Ocarina 3D provides a far richer visual experience, yet remains so true to the original vision of the game that you might be tricked into thinking the graphics aren’t improved very much. It’s only when you directly compare character models and scenery between the 3DS and N64 that you really get a sense of how much better Ocarina 3D looks. It’s a testament to how authentic the graphical overhaul is that it can be so dramatic and yet feel so subtle.

Sadly, the sound did not get similar treatment. It’s by no means a poor audio experience, but it has not been enhanced from the N64 version. It’s a good job that music is still absolutely stellar.

As the name implies, Ocarina of Time is presented with the same 3D visuals you’ve come to know and sometimes love on the 3DS. While it doesn’t exactly add anything to the gameplay, the title certainly looks better with the 3D enhancement. Colors are a little deeper with the 3D slider turned up, and the game appears ever so slightly washed out when you turn the effect down. It doesn’t look hideous, by any means, but it is noticeably less pleasant without the 3D coating.

Thanks to the touchscreen, Ocarina‘s controls are much more efficient and useful, unless you’re the type who doesn’t like to get thumbprints on the screen. If you’re a stylus-only 3DS player, you’ll find the lower screen’s inventory more fiddly to navigate. If you don’t mind using your thumb, then equipping items and whipping out your ocarina is quick and easy.

Gyroscope controls are also included for use with ranged items such as the slingshot or bow. Unfortunately, the 3DS’ contradictory design is such that the motion control won’t work with the 3D visuals, unless you rotate your head along with the screen at a perfect angle. Failure to do so results in you getting an eyeful of painful screen blur. Fortunately, the 3D slider is conveniently located, and you can always just stick to traditional controls. 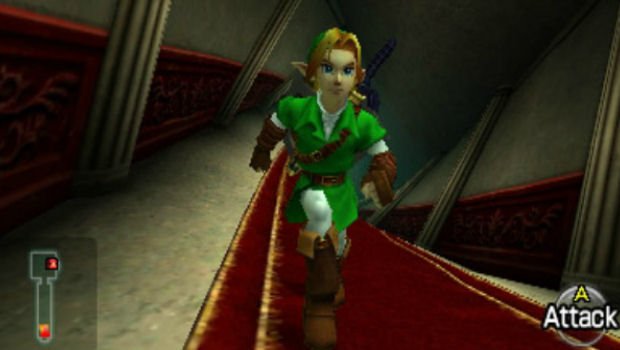 As far as the actual button input goes, Ocarina 3D feels surprisingly at home on the 3DS. The only issue is with the targeting system, which requires a press of the left shoulder button. It’s feels pretty awkward to keep your finger placed there while trying to move and attack at once, but it’s certainly no deal breaker.

For the most part, Ocarina of Time 3D is a joy to play, but there are a handful of niggles. Being a relatively faithful port, a number of annoyances from the 1998 original have carried over to the main game, such as the busybody owl who forces you into conversations. He still tricks you into letting him repeat his dialog by placing your cursor to “Yes” when he asks if you want him to explain things again. Stupid owl bastard.

Some of the contextual commands, such as picking up Cuccos, are pretty dodgy, with Link struggling to get a hold on a running chicken because the right command won’t appear properly. It’s also worth noting that, while it was groundbreaking at the time, the famous Z-targeting system doesn’t always work right, and Link will sometimes not focus on an enemy despite the screen’s targeting reticule telling you he has.

Oh, and Navi … she’s as excruciatingly infuriating as she ever was. So that’s good to know. 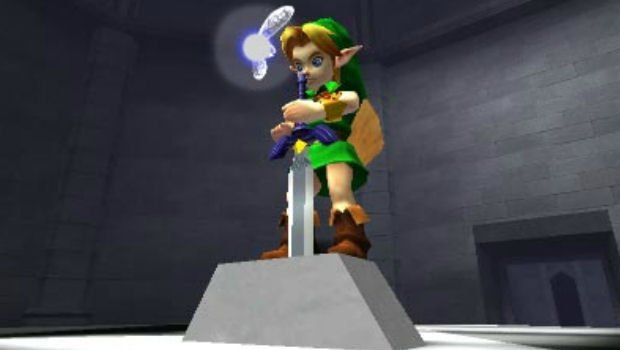 These issues, which still occasionally annoying, do as much to demean the experience today as they did over a decade ago. By that, I mean they do very little indeed. Ocarina of Time still holds up as one of the truly inspiring adventures in the medium of videogames. It’s an absorbing, evocative world, and now it’s one that can be taken anywhere.

To cement this version’s place as the ultimate package, Ocarina of Time 3D also includes the mirrored Master Quest version of the game and a Boss Rush mode. These extras are unlocked after completing the original version, and will surely add a little more longevity to game that already provides enough entertainment for the asking price.

Ocarina of Time 3D is a game that makes you appreciate how far the medium has come. Ten years ago, the idea of running something like Ocarina on a handheld system would be inconceivable. Now, not only do we get it, but we get an improved version with superior graphics. That’s the sort of thing that fascinates me, and makes me very happy to be a gamer in the here and now. 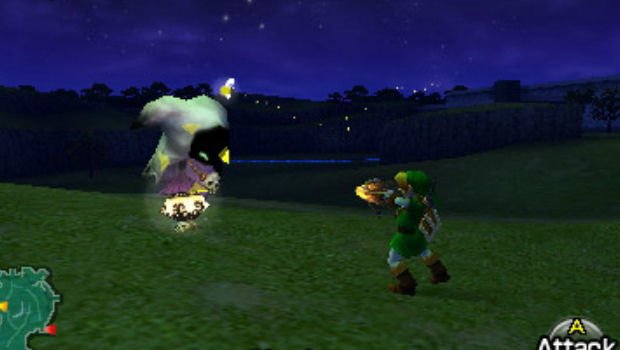 In many ways, this is one of the most pointless reviews I’ve ever written, as you already know if you’re getting Ocarina of Time 3D. More than any other game, I feel the decision to purchase or not was made by gamers the moment it was announced. However, if for some reason you are on the fence, let me tell you that Ocarina of Time 3D is the ultimate version of one of the most endearing videogames you could ever hope to play.

Nothing more needs to be said.