They also snap and crackle

Right now on my iPhone, I have roughly 22 free-to-play games. I don’t take my 3DS or Vita with me when I leave the house, so whenever I find myself out-and-about with a moment of downtime I always like to grab a few minutes of Tap My Katamari or Disney Crossy Road or Pocket Mortys. I don’t consider these to be much of an investment because I never spend money on them. As such, I accept that my time and progress in these games is either limited or can be briefly extended by watching an ad. It’s part of the unspoken contract we make with developers and publishers who provide us with entertainment for free, and in a free-to-play game, it’s totally acceptable.

Where it is not acceptable is in a game that charges you an entry fee up front. The Battle Cats POP! has the soul of a free-to-play title, but on the 3DS it can be a pay-to-wait experience. 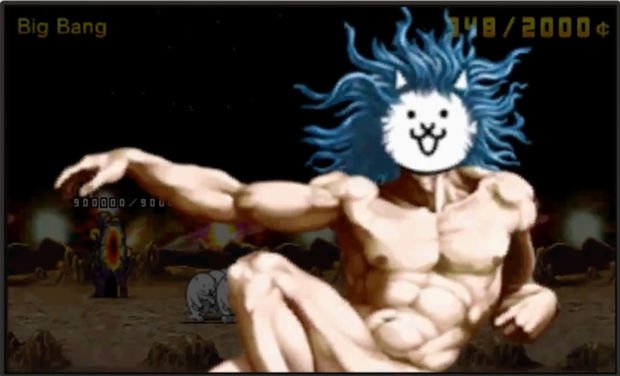 The Battle Cats POP! may be the most fun I’ve had with a game that really grinds my gears. It’s a side-scrolling real-time strategy game, playing like a simplified version of Swords & Soldiers. You command an army of up to 12 Battle Cats as you try to take over the world, and then some. Sending your clowder onto the battlefield requires only a touch of the stylus so long as you have the funds necessary to afford that cat. Money is gained automatically over the course of the match and your funds tend to jump whenever you kill an enemy.

The object of every battle is to destroy your enemy’s base. Standing in your way is a collection of dogs, snakes, gorillas, pigs, and the cast of xkcd. To take down these enemies you’ll need to diversify your army as much as possible. Different cats play different roles (like a tank or ranged) and deciding when to send out a specific cat makes up the bulk of the strategy you’ll need to employ.

It’s all extremely easy to learn and I found myself developing unique strategies quite quickly. Sometimes I would wait until the enemy was right at my doorstep before I attacked and other times I would bring the full force of my army as soon as possible. No two matches began the same way, but more often than not they ended with me just overwhelming the enemy. Even though there are few enemy types in the game, it never became repetitive for me.

You start out with just a few cats but your stable will quickly grow as you amass cat food cans. This is the currency for the game and you have four options for it: use it to unlock rare cats, convert it to XP to level up cats and your home base, spend it in the item shop, or offer it to the Cat God who can help you out in battle. Cat food cans are gained every time you win on a new map and you get 10 cans each day you sign in. Wins also net you XP to spend how you please and occasionally rare tickets to use in the rare cat capsules.

Capsules are where you’ll find the more peculiar cats seen in the game. Sushi Cats, Viking Cats, Nerd Cats, etc., they can all be found here if you’re lucky enough to unlock them. The cat you get is random and duplicates can be converted to XP or saved in cat storage. Use the XP to level up a cat enough and it will evolve into a stronger and stranger cat.

The game’s birth as a free-to-play mobile experience seeps into every crevasse. Battles with enemy armies often throw curve balls that you may not be ready to handle. I can think of several matches where my base would quickly become inundated with squirrels or otters, defeating me before I had a chance to adequately deploy my troops. This is a classic move of the free-to-play industry, one that attempts to push you into spending some money to progress. I don’t mind those types of battles as they forced me to regroup and restrategize, and in a way, those types of confrontations made the game more interesting. What I do mind is the pointless energy meter.

It actually took me a few hours to even realize there was an energy meter at all, even though it’s pretty hard to miss on the mission select screen. Each mission you take costs a bit of energy and that cost multiplies as you progress. Eventually, I found myself only able to do three or four missions before having to stop and wait for it to regenerate. Retrying a mission after you lose costs energy, as does replaying old missions you’ve already beat. This means you can only grind for XP for so long before you’re back playing the waiting game.

Annoying at first, the energy meter became completely unacceptable when I hit missions my team was in no way ready to tackle. I needed to grind, to replay old missions as many times as I could for the XP so I could upgrade my forces. But I had run out of energy, so I had to wait.

What’s weird is the game makes a bunch of concessions that help you get around this pointless feature. You can spend cat food to increase the amount of energy you can accumulate and you gain energy even when you’re playing. If you do run out, you just trade in cans to refill it and the game does reward you with cat food cans when you replay missions, but only a certain amount. With all of this it can be easy to keep playing for longer periods of time, but it comes at the cost of buying items to help you in battle or unlocking new cats with the rare capsules that you might need to tackle the next unknown enemy.

It just feels like a waste of a precious resource for a feature that shouldn’t be here at all. This is not free-to-play, this is a $10 game and whether or not you consider that to be a “full-priced” title doesn’t excuse the fact a feature meant to goad you into spending money on your iPhone is here restricting you when you’ve already paid your admission fee. Developer PONOS did get rid of the mobile version’s microtransactions, but for the life of me I can’t figure out why an energy meter was left in.

When you complete the first story mode in the game, you unlock a challenge mode, which is a stream of enemies of increasing difficulty you have to defeat, and the 3DS exclusive VS. mode which is local play only. As nobody around me owns this game, I was unable to try out the player-vs-player battles.

The Battle Cats POP! is a game that’s as fun as it is weird. When it’s not putting you in time out with the energy meter, it can be addictive as hell. Too much of its free-to-play roots are still present, but even with those elements it’s still a worthwhile time killer.