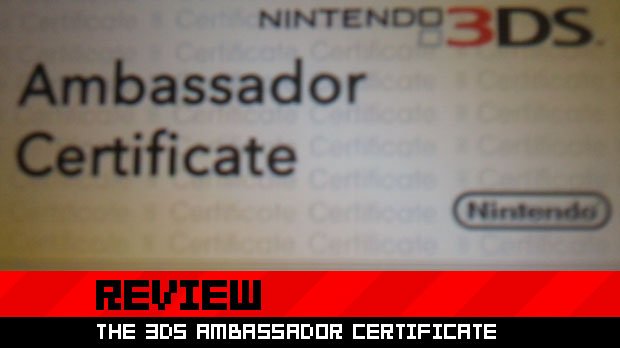 Nintendo is giving early adopters twenty free videogames from its dusty old vaults, and that’s fine, but those hoping for something fresher and/or worth more than a collective five bucks were left disappointed … until now!

See, not only is Nintendo giving away ten NES games and ten GBA games, it’s also letting ambassadors get their hands on an all-new piece of software — The 3DS Ambassador Certificate.

We downloaded this hot item right away and gave it a full review. Trust us when we say this it’s worth turning your 3DS on for!

As soon as I launched The 3DS Ambassador Certificate, I was instantly blown away by the graphics. Yes, graphics aren’t everything, and we must never let epic visuals sway us away from the gameplay, but it needs to be said that this is a gorgeous looking game. The stark contrast between the black text and urine-yellow background really reflects the internal conflict felt by 3DS owners during a troublesome launch period. Nintendo is speaking to every ambassador out there with this strong visual statement.

While the 3DS will obviously never match what the PlayStation Vita can bring to the table, one is nonetheless impressed by what the plucky handheld can do. Clearly, The Certificate was designed to showcase everything that the 3DS is capable of, and that’s more than evident in the smooth animations as the text dynamically scrolls across the entire screen (that widescreen is really being put to great use). Savvy players will notice that the text moves from right to left, which is a shocking — and potentially controversial — break from convention. It takes some getting used to, but once you’re acclimatized, it’ll feel like home. 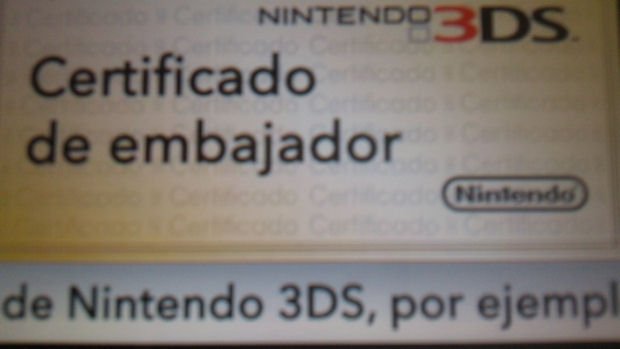 Those worrying that this is little more than a visual tech demo can rest assured — the gameplay is more than a match for the graphics. Intuitive and immersive controls allow you to pause, start, and pause again, making you feel like you’re really watching a three-minute video of some text crawling along a screen!

What truly impresses me about The Certificate is the sheer amount of freedom awarded to the player. You can read the text, not read the text, and even read it in Spanish if you can already read things in Spanish. In addition, there is a Braid-like time-reversal mechanic, allowing you to rewind or fast-forward to any point of the game and replay to your heart’s content.

Interestingly, this software does not make use of the system’s 3D capability, making it the first all-new title to eschew the feature. While some might be disappointed, I feel it’s an encouraging step forward, proving that a 3DS game can stand on its own merits, without gimmickry, and still be a load of fun. 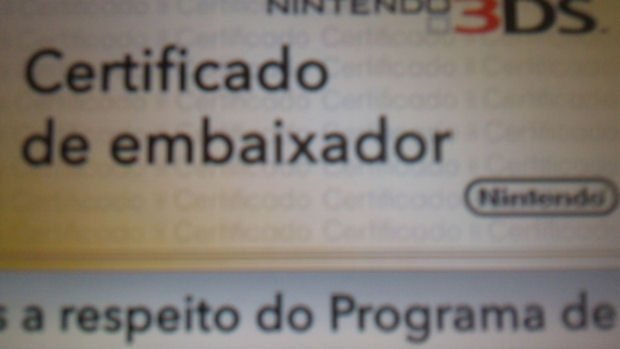 The 3DS Ambassador Certificate is, without a doubt, the most compelling 3DS title to have been released since launch. Engrossing, addictive, and with a surprising story, The Certificate is a game you’ll want to play again and again. This may well be a franchise that joins the ranks of Zelda, Mario and DSi Calculator as one of the great Nintendo gaming icons.