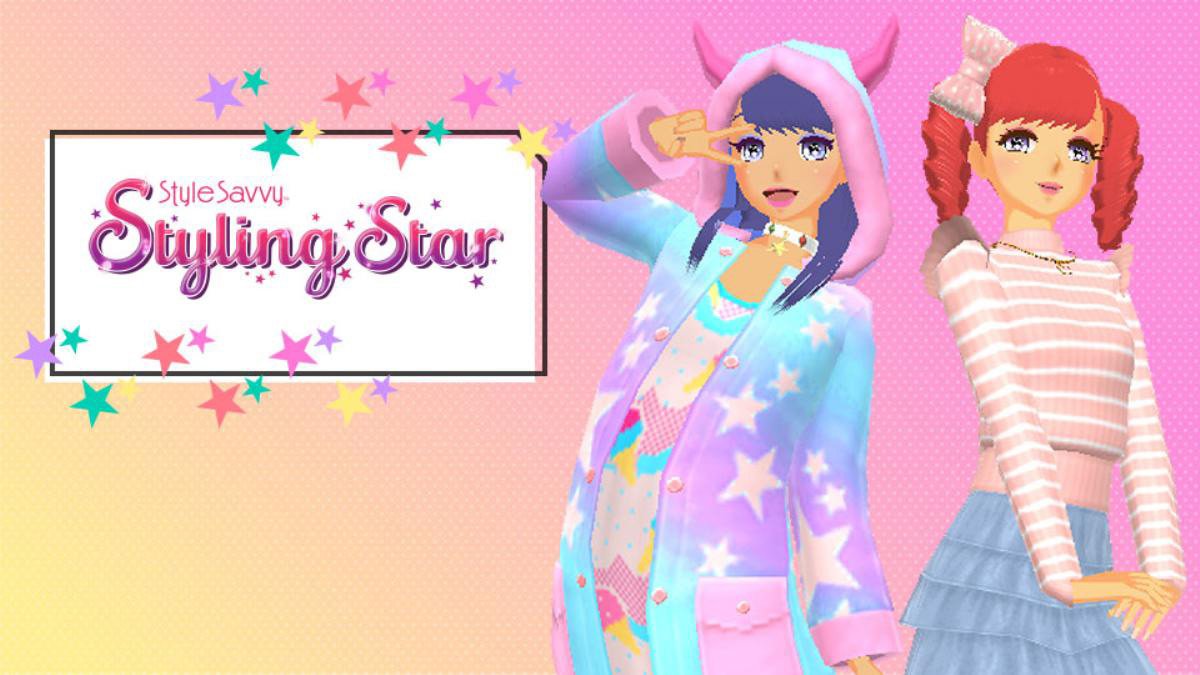 People on the internet like to argue that Nintendo will attempt to bury some products. Releasing a game on the 3DS after the Switch is already on the market? Nintendo must be trying to bury it. Releasing a game the same week as (insert popular title here)? Nintendo must be trying to bury it. I don’t believe that’s true, however, if Nintendo were some nefarious company that intentionally tried to undermine its own products, there would be no better example of this than Style Savvy: Styling Star.

Here is a fashion game (red flag) for the 3DS (big red flag) that is only available on the eShop (bigger, redder flag) for full retail price (biggest, reddest flag) with a release date of Christmas Day (lord, you couldn’t find a flag bigger and redder than this). If Nintendo were trying to bury a game this would be how they do it.

And yet, like I said, I don’t think Nintendo would act that way. Because there is no chance somebody who works at Nintendo of America could play a game this charming and this positively radiant and think ”Nah, let’s kill it.” 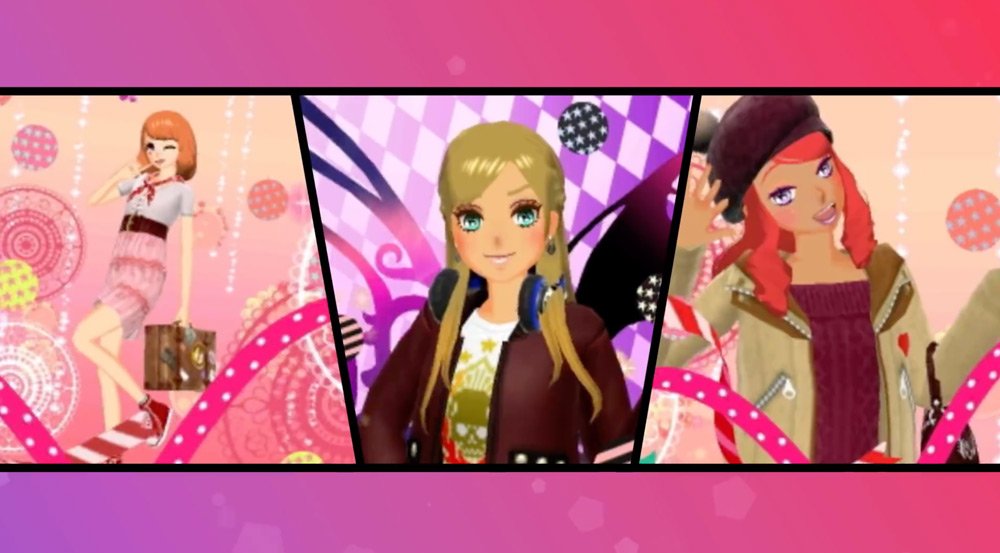 The opening moments of Style Savvy: Styling Star are like a welcomed rerun I never change the channel from. I create a character that arrives in town to take over a small retailer in hopes of transforming it into the number-one clothing destination in town. After three games of having to prove myself worthy of running an independent boutique before being given control, Styling Star puts its trust in me right away as my uncle Tim – a man who looks like five women are about to come forward with allegations about him – hands me the keys to his shop and tells me to go to town.

Even though I haven’t picked up Fashion Forward, the previous entry in the series, for months, as soon as I take control of my store it all becomes second nature to me. That’s because the core of the gameplay is still the same after all these years. Wayward girls, all of whom are the exact same size, wander into my shop and ask me to pick out a garment or entire outfit for them. They give me directions like “Make it bold” or “I want to rock” and I have to use my fashion know-how, as well as the generous search feature, to find the perfect piece for them. If I’m confident in my choice – and I’m rarely not – I tell them to “try it on.” If they love it – and they usually do – I’m rewarded with a short video of them workin’ it.

If I’m ever out of supplies, a quick trip to the Exhibition Hall will fix that. This is where I find all the brands available and load up on skirts, shoes and whatever else I’m low on. Most of the fashion is recycled from previous games, including a lot of ugly stuff, but the new digs allow for cute and creative outfits. Customers are patient with me and if I’m out of something they want they’ll agree to come back later when it’s in stock. It’s nearly impossible to fail a customer in this game. Even when I do send someone home unsatisfied, they’ll always be ready to give me a second chance the next day.

Difficulty has never been this series’ forte. Style Savvy isn’t a shop simulator meant to test my business skills and fortitude, but rather a life sim where I make people happy through the magic of fashion. The only thing easier than picking out the right top and matching earrings is working the salon or beautician’s shop, where no matter what I do I never seem to be able to disappoint anyone. I get that won’t appeal to many people, but there is something comforting and wholesome about a game where my only aim is to make people happy. It’s like playing a Hallmark Christmas movie, something that is particularly true of this entry and its focus on storytelling.

Previous Style Savvy games told stories that revolved around my avatar and her ascension to the top of the fashion world. Here, my character is more of a fashion matriarch, the guru everyone comes to when they need help picking out a skirt or choosing the right nail polish. When I’m at the salon I don’t cut hair, I merely guide Cece on what style will look best. When I’m called into Nin10 Productions, the town’s talent agency that’s breeding the next set of global superstars, I’m not singing a song but rather picking out the outfit that will define another character’s music career. Putting me in the background of the narrative paves the way for the series’ best storytelling. 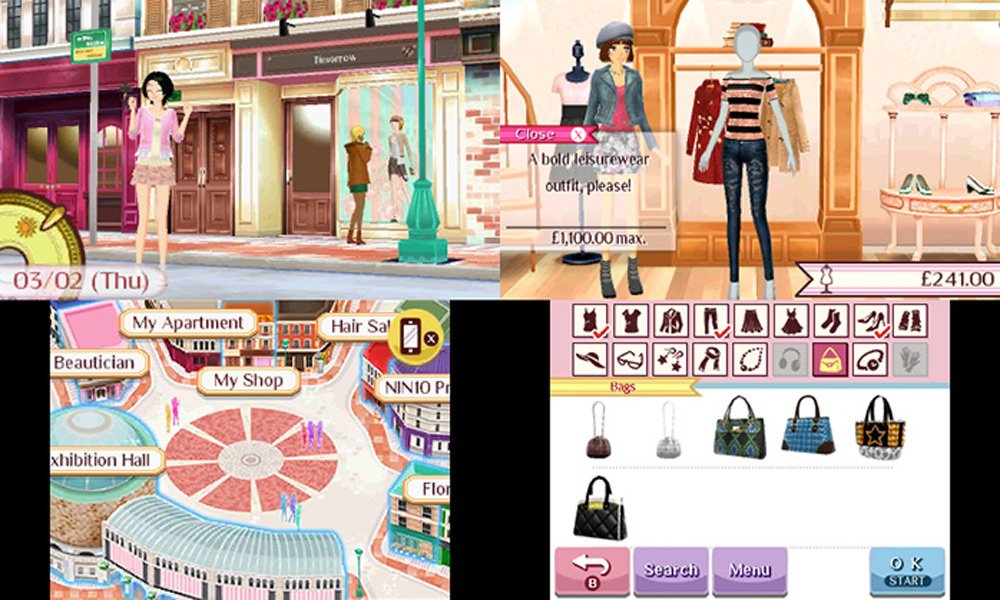 Okay, so it’s not Phantom Thread or anything, but it’s certainly on par with a good episode of Jane By Design. There are multiple girls here with multiple goals that nearly all revolve around music. Some want to be singers – belting out fully voiced feel-good tunes that sound like they’re straight off the streets of Disney’s California Adventure – while others want to open their own clubs. It’s on my shoulders to make sure they have the right look to move forward. Because of my constant interactions with the girls, I actually come to know and care about them.

I also see the results of my guidance. In past games, customers say the outfit or shirt or skirt I picked for them really impressed so-and-so, but in Styling Star I get to see it in action. I get to see the girls take the stage to sing or pose for an advertising campaign. In the other games that would have been me on that stage or in that ad. Instead, I’m the Kate Young, the Elizabeth Stewart, the Ilaria Urbinati. I stay behind the scenes and work my magic to make everyone else look good while getting my paper.

All of the storylines and much-improved personalities, even from ancillary characters, combine to make a world that is just interesting to be in. The city in Styling Star lacks a certain je ne sais quoi but these girls more than make up for it. Whether I’m watching their latest video on MewTube, sending them a text, or giving them a pep-talk after a particularly bad incident, everything I do has meaning and purpose even if there is arguably less to do than before. Fashion Forward’s fun color hunts, doll house and miniatures are out with nothing added to take their place. The Queen’s English is back though, something I expected given the quick turnaround on localization. Menswear returns from Trendsetters but with a less hands-on approach. Styling Star also isn’t as vibrant as the previous two games, trading their rich color palettes for a more pastel look.

While I miss taking snapshots to unlock new colors, I’m exuberant Syn Sophia did away with the real-time clock. It never felt natural to host three fashion shows, make a dozen trips to the style center, and do 15 haircuts in a single day. The short-but-not-too-short in-game clock is the key to everything here. It’s why the stories are so good, it’s why I have a real sense of progress and reward, and it’s why even though this is largely the same game I’ve played three times before, I’m helplessly addicted to it. 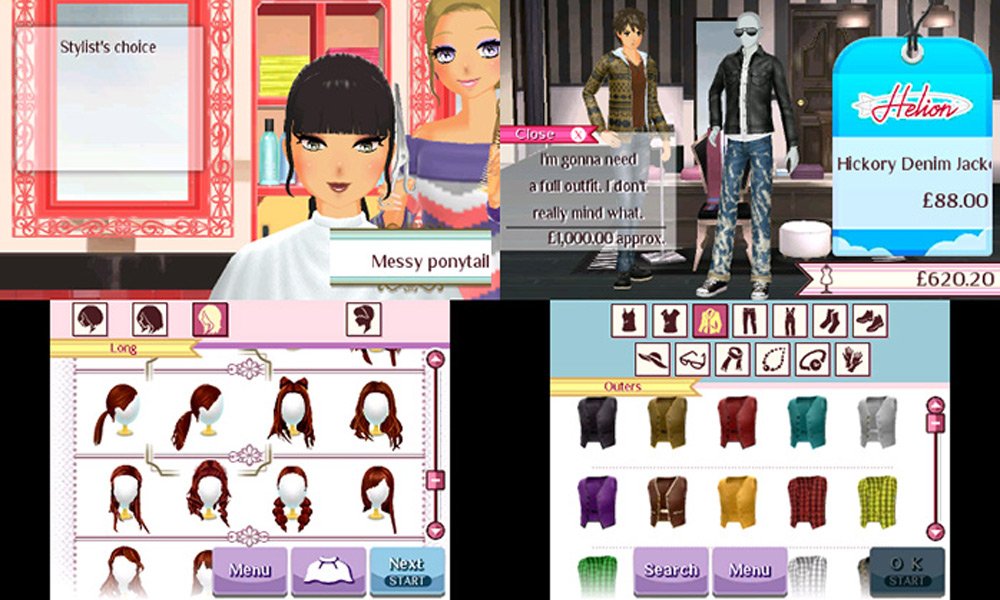 That’s not the only improvement. Style Savvy’s biggest issue has always been the customer’s iron-clad attachment to certain brands or looks. When dressing my mannequin I have to go with a certain style, such as bold or lively, or a specific brand to get people to buy it. Even if I put together a heckin’ cute outfit, they won’t be interested if the styles or brands are too different.

All of that is still true here but now girls really seem to take my choice into consideration when putting together an outfit. If they want a feminine look and I pair a fabulous blouse with basic pants, I find it easier to convince them it’s the right choice than in the past. They’ll still totally reject some options, a fact that can be troublesome when I’m given a more opaque request like “Match this picture,” but as the number-one aficionado of all things fashionable in the city, my recommendations feel as though they carry more weight than before.

I once said I didn’t think the Style Savvy series would continue on anything but mobile, but Nintendo proved me wrong. I’m glad I was wrong because Style Savvy: Styling Star is easily my favorite entry in the series yet. It has nearly everything I love about the franchise mixed with a heaping helping of Freeform-level drama, making for a genuinely optimistic experience that exudes charisma with every outfit I put together.