Upon its original release last year, Slain! was met with all the enthusiasm of a wet fart. The game’s Kickstarter campaign showed a lot of promise and the aesthetics behind the game got a bunch of people amped up. This game looked to be a heavy metal album cover brought to life, so what could possibly go wrong?

Turns out a lot; there were various problems with hit detection, sluggish controls, and generally just a lackluster experience. Developer Wolf Brew Games took an extensive look at complaints and issued an update titled Slain: Back From Hell within a few months. The game then came much closer to the original vision outlined by that crowdfunding campaign and people were seemingly happy with the result.

So if everything was hunky dory and people dig the game, why the hell is the Switch version so bad? 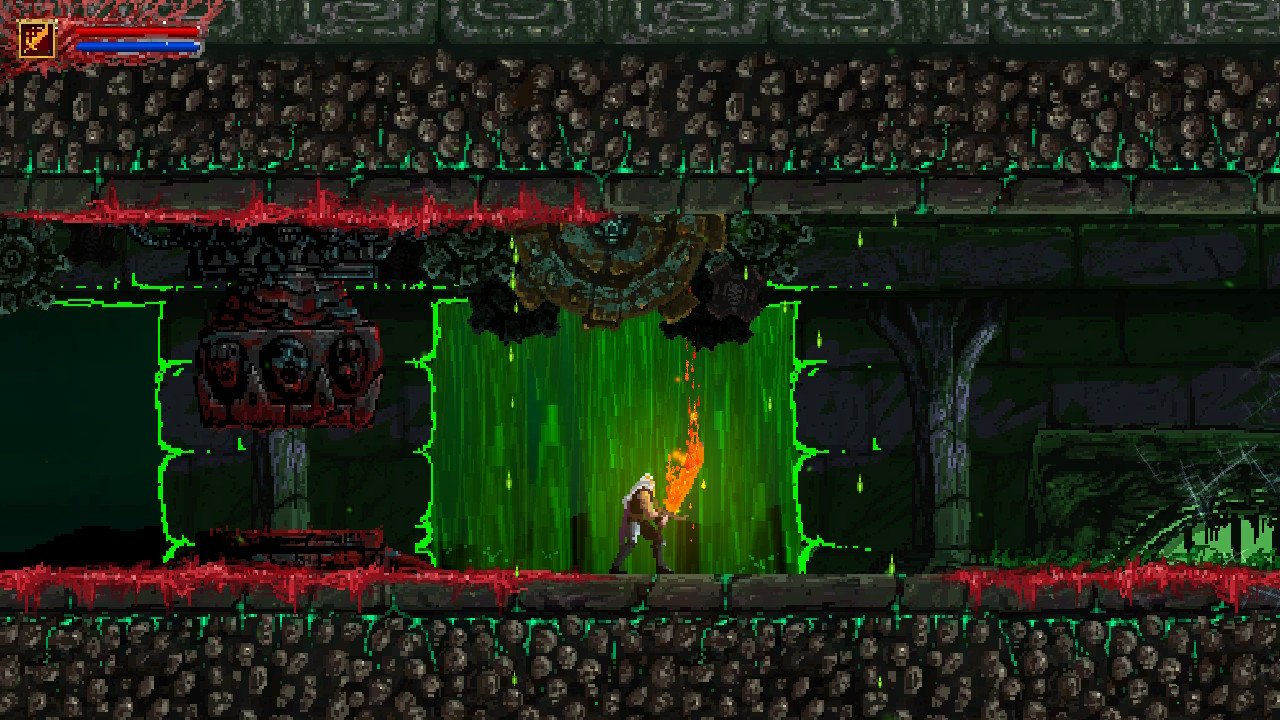 I’ll get all the good points out of the way first, because there really is very little to like. I dig the music quite a bit and the art style can be totally metal. Like I said above, this looks like an Iron Maiden album cover from the ‘80s. Slain oozes style and isn’t ashamed to plaster the screen with gory goodness.

The music can get repetitive, but the heavy guitar riffs and intense drums do a good job of psyching you up for battle. Slain is a difficult game, so having a thumping soundtrack coax you into retrying a tricky segment is a godsend.

I’m also quite partial to the pseudo-non-linear level progression you can take in the beginning. After completing the first zone, you’ll be thrown into a hub world that lets you select between two different paths. Neither one matters since you’ll need to complete them both, but if you’re having a tough time with one section, you can back out and go for the other. It gives you some choice in how you’d like to proceed during the early parts of the game.

So with that all said I’ll tackle the biggest problem with this particular port of Back from Hell. For some reason, Slain runs at 30 FPS on the Switch. Whether you’re playing in docked or portable mode, Slain runs at a languid pace. It never feels smooth and that sluggish framerate actively makes the artwork look rigid and unsightly.

This then compounds the challenging nature of the game. Slain is clearly attempting to be an old-school hack-n-slash, so you’ll need precise strikes to attack your foes and a lot of the finicky platforming requires pixel-perfect precision. With the sluggish performance, making any kind of action is met with a delay of around a second.

The best example I can give is the infuriating ranged opponents. While you can block attacks to mitigate the damage done to you, your best option is to swing your weapon and send projectiles back at casters. Trying to do this in the heat of the moment with a one-second delay on your actions is an exercise in frustration. If I wasn’t determined to see this game through, I would have given up long before the five-hour run time. 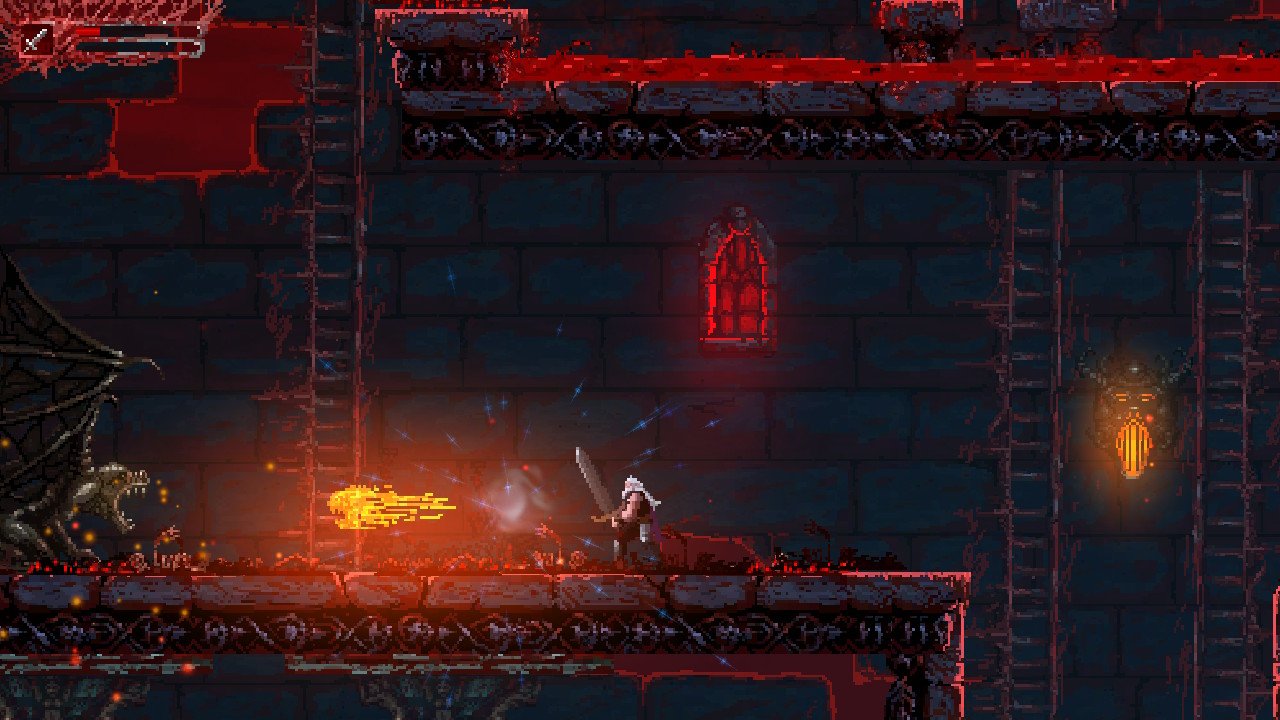 Even without the frankly terrible framerate issue, I still don’t see anything about Slain that is really worth your time. Combat is so basic that it never feels satisfying and the “tougher” enemies all but require you to use a split-second block maneuver to even damage them. Your attacks thankfully register with a meaty sound effect (unlike the original release), but it’s still a crapshoot as to when some enemies will walk through your attacks or not.

There is also a big problem with the stagger attack you can use on enemies. This is the same idea as the split-second block maneuver, but when you stagger an enemy, you can then move in and one-hit kill them with a camera zoom and slow-motion pause. The problem is that other enemies don’t recognize this attack, so you might have a caster shoot a projectile which then becomes impossible to dodge because you’re in the middle of an animation. Imagine how many four letter words I let out because of that.

Then there are the frankly unfair environmental obstacles that will instantly kill you. While some are clearly signposted by visual cues, others blend in so well with the art direction that you’ll inevitably walk into a death trap without even knowing what killed you. This also happens with some enemies being obscured by artwork that covers the screen, most notably in a boss fight that can spawn additional enemies you’ll never see behind a pillar. 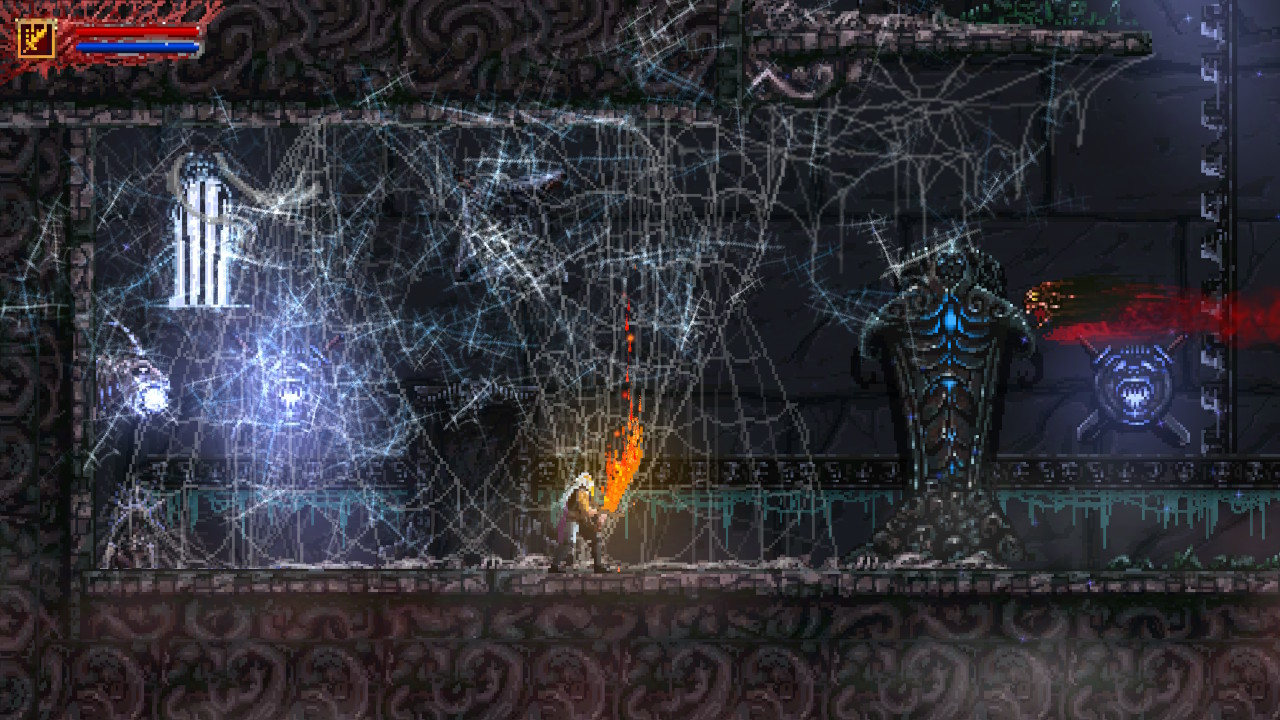 I’ve also run into plenty of moments where the camera just does not cooperate. You’ll be required to make blind jumps where an enemy might be hiding or a bottomless pit is just big enough for you to misjudge, but you’ll never know until you bite the bullet. As brutal as that might be, a leap of faith is not a fair challenge.

In the few moments where everything works, Slain can almost pass as a competent game. While the platforming is basically a wash, sometimes enemies will attack you one at a time and give you easily recognizable patterns to retaliate. The music gets going and your character’s hair flows through the air like a god; it really pumps you up. That feeling doesn’t last, though.

Having beaten Back From Hell, I don’t really know what else to say. I hope to never return to this game and I wouldn’t want anyone to waste their time and money on the endeavor. Whether that is harsh or not, Slain on the Switch is not the version you should buy. If you want to have any hope of enjoying the game, get any of the other versions available (all of which run at 60 FPS and offer customizable controls).