Set in a city controlled by the Evil Crime Syndicate — a criminal organization that employs everyone from swimmers to clowns to fancy ladies dressed in beautiful gowns — Super Punch Patrol puts players in control of three cops that have had enough of the city’s corruption and decide to take matters into their own hands.

It’s a set-up worthy of the inspiration for the title, with Bertil Hörberg reaching back to the earliest days of the side-scrolling beat ’em up genre in creating his latest title. Whereas this year’s Streets of Rage 4 sought to update the often dusty conventions for a modern audience, Super Punch Patrol gives players the near-exact feel of those classics, warts and all. 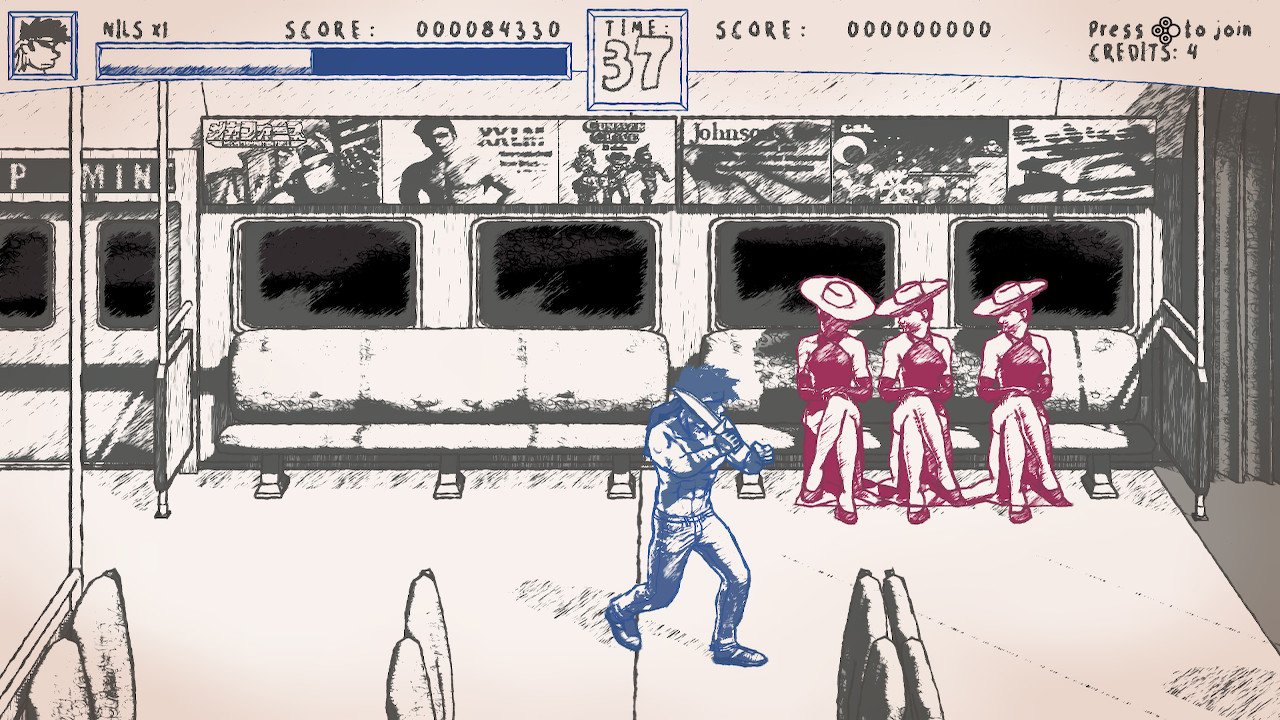 Super Punch Patrol‘s three playable characters fit the archetypes of the genre’s protagonist staples. There’s Anders Punch, a lumbering fellow who hits slow but hard; Nils, a quick cop who prefers to fight with his shirt off; and Selma, who plays more or less similar to Nils with a few unique characteristics of her own. Each character has a simple, one-button combo, as well as a super move that clears the area around them at the cost of a little bit of health. They also have a jump attack, a dash attack, and the ability to grab their opponents with a few options on how to dispose of them.

You can also do a quick dodge either up or down on the stage, and that’s a move I found myself relying on a lot. That’s because this game is hard. On all difficulty levels, of which there are four, enemies can do a considerable amount of damage. The grunts you face in each stage are relentless, often attacking off-screen, hitting straight through your super moves, or quickly surrounding you to take turns punching you in the face like you’re Kurt Russell at the end of Death Proof. A well-timed dodge might get you out of that pickle, but what this game could really use is a backward attack. The ability to throw the weapons you pick up would be helpful as well. Both attack options have been present in the genre for as long as I can remember, so it’s disappointing they didn’t find their way into this game.

The lack of those moves, as well as the aggressive A.I. and the fact that enemies can come at you from both sides of the screen, results in an experience that is best played with a friend. Super Punch Patrol supports couch co-op, and an individual Joy-Con does a surprisingly excellent job of handling the gameplay. When playing with a partner, all the little frustrating moments I experienced going through it solo became extremely uncommon. Sure, enemies still dealt a bit too much damage, but with someone at my side, I didn’t have to worry about one of my lives disappearing in seconds because I found myself surrounded by katana-wielding ninja and shirtless bears.

The design of those bears and the other enemies you face are the clear highlight of this package. The sketchbook art direction here is fantastic, far ahead of what Hörberg achieved with his Gunman Clive titles. When this game was revealed, there were a lot of comments comparing the art to Tom of Finland. It’s an apt comparison as, like Mr. Laaksonen, Super Punch Patrol has a clear admiration for the male body. You see it in the heroes, in the advertisements in the subway level, and in the moose knuckles of enemies like Henrik and Gustav when you knock them to the ground. 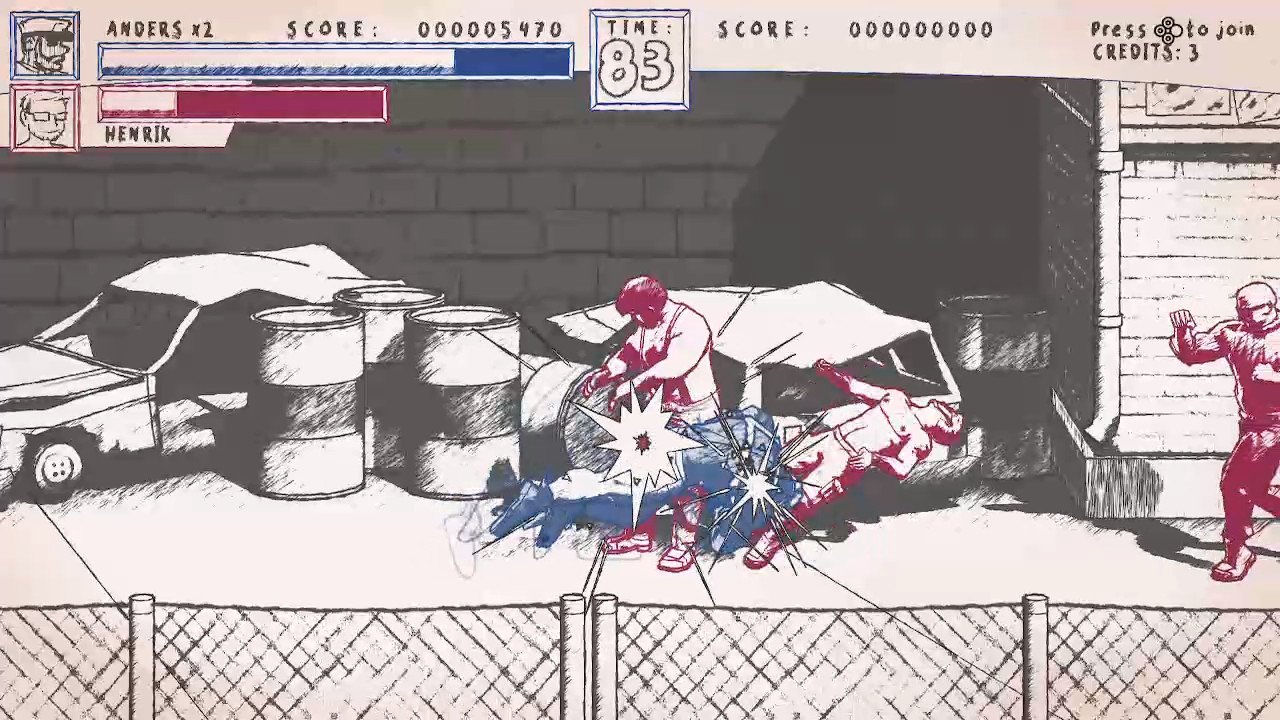 Enemy variety is pretty small, and later stages contain nicely drawn reskins of those you’ve fought before; but at just five levels, it’s not that big of a deal. The level designs themselves are pretty straight-forward, featuring a mix of beat ’em up staples like back alleys, sewers, elevators, and rooftops. There’s even a rocket skateboard stage that feels right out of 1989’s Teenage Mutant Ninja Turtles. And while each level is distinct in its setting, the lack of color throughout Super Punch Patrol leaves the city feeling a bit too lifeless.

At $4.99, you really can’t go wrong with downloading Super Punch Patrol from the eShop. With a few adjustments this could be a really good, potentially great game, but there’s easily five bucks worth of entertainment here, including 12 costumes to unlock across the three characters and an online leaderboard if you want to chase high scores. Just make sure you bring a friend along because this city is not kind to those who walk its streets alone.