There was a brief time in my childhood where I was obsessed with the Iditarod. The allure of that type of competition, just a guy and his dogs traveling the snowy wilds of Alaska, was enticing to a more youthful version of me. My obsession with it resulted in Iron Will finding its way into my family’s VCR on an almost weekly basis.

Like most of the things I fancied in my youth, the call of the wild eventually stopped speaking to me. I outgrew the childish notions of becoming a world-famous dog sled racer and settled for more realistic goals, like becoming a Pulitzer Prize-winning author. I’d even forgotten how often I watched that movie in the ’90s until a little trailer for The Red Lantern popped up on my YouTube feed and reminded me that, oh yeah, I’m still kind of obsessed with this. 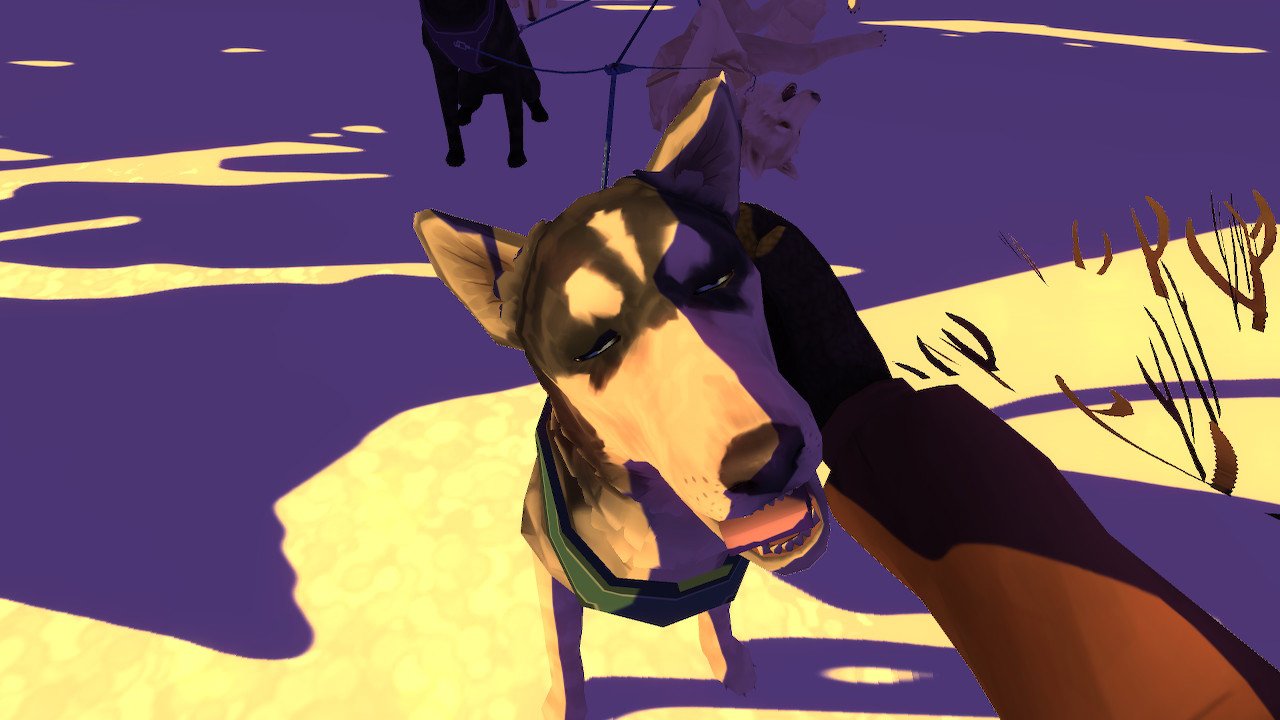 If you’ve read Timberline Studio’s description of The Red Lantern as a “story-driven, rogue-lite, survival game” and are not quite sure what they mean by that, what they’re basically saying is it’s The Oregon Trail but in Alaska. Players take up the role of the unnamed Musher, who sets off to start her new life in the picturesque wilderness of America’s 49th state after failing to find her purpose in San Francisco. Joining her on this discovery quest is her dog Chomper and four other dogs you’ll choose to guide her to her new home.

The wilds of the Yukon are not kind to an unprepared newcomer, so choosing the right dogs may mean the difference between getting to your destination safely or starving to death to become food for wolves. As you meet each dog and accept or reject them to your team, you’ll get a good idea of how they’ll assist you on your trip. Some dogs are good trackers, some are big and intimidating, and others have strong noses that catch elusive scents. Every dog has its upside, but you’ll discover downsides as well, depending on the random events you encounter on your journey.

Like The Oregon Trail, The Red Lantern is a largely passive experience. The Musher will monologize her thoughts and feelings on this abrupt change in her life while the dogs steer the sled along randomly generated paths. Player input is only required when choosing to go left or right at a fork in the road, engaging in an event or encounter, or tending to your dogs and the Musher whenever you set up camp. For everything else, you can just sit back and enjoy the stunning scenery Timberline Studio has crafted.

Your first few attempts in the wilderness will ultimately result in failure, save for anyone who draws the luckiest random encounters right off the bat. Failure is baked into the core of the experience as each failed run is a daydream in the mind of the Musher. Her experiences in those dreams will change how she’ll pack for her next run. So if you find an ax in the wild during a failed run, she’ll be sure to pack an ax at the start of the next one. It dawned on me an hour into my journey to her new home that she has everything she needs to succeed stocked up in her van. She’s just incredibly ignorant and unprepared for the realities she’s about to face.

There are a couple ways to die out in the wild, but the death most common on my attempts was starvation. The Musher and her dogs each start out with half-full stomachs, but every time your dogs pass a point marker, they’ll lose a notch on their hunger meter. The same happens to the Musher every time she engages in a random encounter. Food tends to go quickly when you dine at camp, so constant hunting is a necessity here. You may not like shooting a deer right in the face as it stands blissfully unaware of its fate, but you need to do it to survive. But don’t worry, the Musher will make you feel very bad about it.

One thing I was looking for in The Red Lantern was moments of quiet introspection as I glided along the snowy trails laid down before me. But quiet is not really in the Musher’s vocabulary. She talks a lot: to herself, to the dogs, to the animals she encounters. And while Ashly Burch does a fine job of pouring emotion into the Musher’s words, at around the fourth or fifth time I’m hearing the same lines at the camp, the same worried monologue at the halfway point of the trip, and the same observations on how this hole in the ice would make a great fishing spot (if I only brought a pole), I kind of just want her to stop talking and take in the beauty of her new home. The landscapes, surprisingly, are something she never really talks about in all her self-conversations. More variety in what she has to say would make each subsequent run a bit more pleasant. 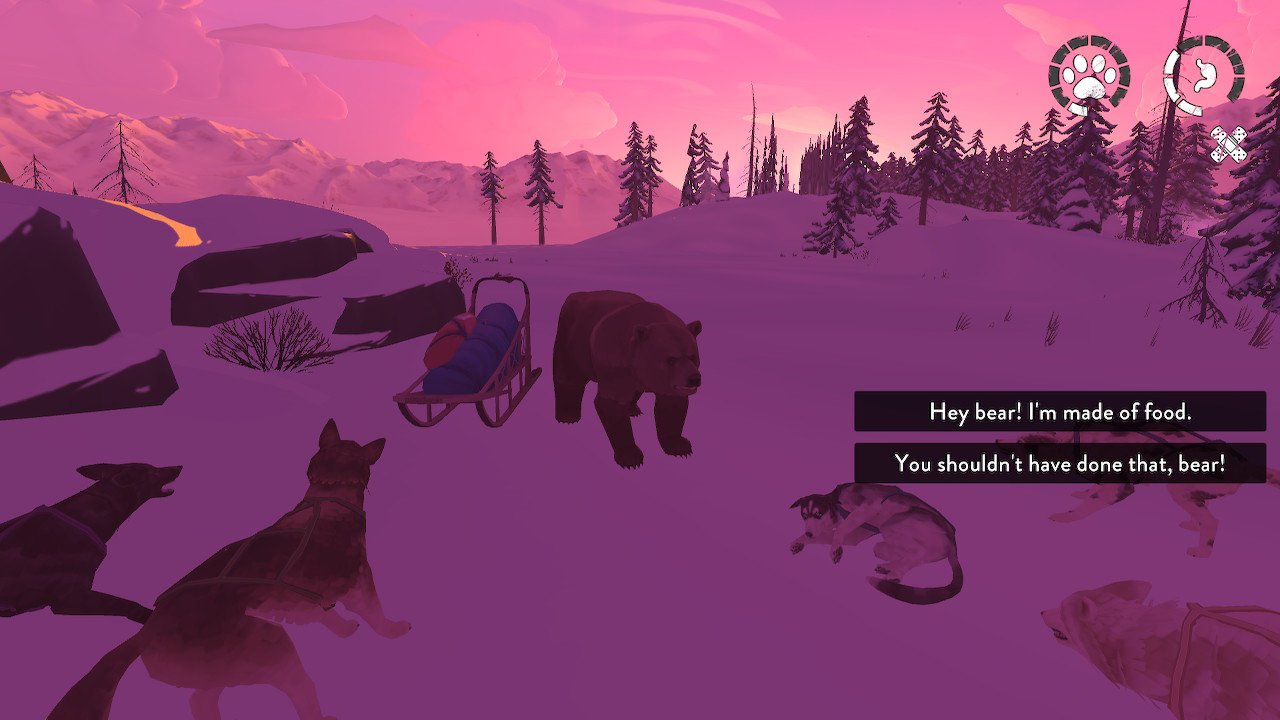 The game could also use some adjustments in how it paces itself. Each leg of the journey, labeled at the beginning and end with a point marker, is randomly generated. Some of these legs are quite long, especially if the Musher has a lot of dialog she needs to get out. Others are short, so short that you can complete a random event, get back on her sleigh, and before the dogs even have a chance to get to full speed, reach the end of the leg and set up camp. We’re talking seconds here, and that type of wham-bam-thank-you-ma’am pacing undermines the profound nature of her journey.

Even when my runs feel fleeting, I do enjoy hitting the trails again and again. There are a lot of events to witness and different outcomes depending on the choices you make. There are also different outcomes depending on the dogs on your team. One such example I encountered is the wolf attack. With my original team, whenever I encountered this wolf in the wild, it would attack the Musher, leaving her injured and in need of bandages at the next camp stop. But on my second save file containing a different set of dogs, one of the pups came to the Musher’s rescue when the wolf jumped her way. That alone is enough to get me to have multiple save files, something I rarely do with any of my games.

It’s always reposeful when a video game can connect me with the experiences of my youth, and The Red Lantern does just that. It can be breathtaking at times, and it can also be pretty banausic, but the Musher’s journey to her new home has enough beauty, adventure, and adorable dogs I just don’t want to stop petting to make each trip worthwhile.