Growing up in the nineties, I gained a certain affinity for contrived plastic gimmicks designed to be collected by compulsive children. The likes of Mini Boglins, Monster in My Pocket, and GoGo’s Crazy Bones made up a huge part of my childhood, so it took little effort at all for me to care about Skylanders: Spyro’s Adventure.

Skylanders is a game that evokes fond memories of those childhood frivolities, based as it is around the continued acquisition of little plastic monsters. It has its eyes set on being the next big hit among children this year, and having played with it for a number of days, I have a confession to make…

I really hope it takes off! 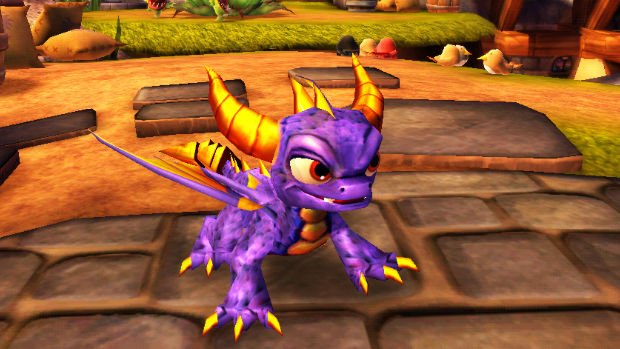 Skylanders: Spyro’s Adventure is a game that requires a series of real-life toys in order to work. The narrative conceit is that the titular “Skylanders” are frozen in our world and are brought to life when placed upon the “Portal of Power.” Once in place, the Skylander reanimates within the provided game’s world, where they must fight an army of fantastical creatures and stop the machinations of the evil Kaos, a bald-headed sorcerer who is basically Invader Zim.

Each toy features a nicely detailed creature that sits on top of a green plastic base, and this base is where the toy’s unique information is stored. Once you plug the Portal of Power into your console via the included USB cord, all you have to do is place a desired Skylander on top of it. The Portal will read the information stored in its base and use it to create a playable character within the videogame. Furthermore, each toy is capable of saving its own data, allowing it to remember its current level, experience points, collected money and even whatever stat-boosting hat it’s currently wearing.

Changing characters is as simple as taking one Skylander off the Portal and replacing it with a new one. The game will pause whenever a toy is removed and instantly resume whenever a fresh one is scanned. This is a near-seamless transition punctuated only by each character’s announcing itself before the game recommences. While the vast majority of toys works absolutely perfectly, there are a few temperamental figures. One of my characters can only be recognized by the game if it’s placed on the right-hand side of the Portal, while another randomly drops from the game and needs repositioning. Most of them work just fine, but beware that a couple of figures can give the player trouble. 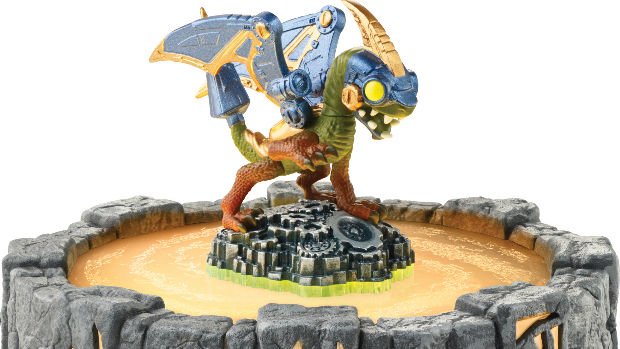 The gimmick is simple but clever. It’s got that spark of originality that could make it a hit, but all this would be for naught if the game itself was terrible. To my great and welcome surprise, Skylanders is not a terrible game. In fact, when viewed in the context of a title predominantly aimed at children, it is of remarkably high quality. It’s not exactly challenging, nor is it the deepest experience, but it’s actually quite fun, even for an adult.

Skylanders resembles a traditional hack n’ slash dungeon crawler in many ways. Every character starts with two main attacks (and can earn a third special ability later), both of which activate with simple button-mashing commands. Levels are filled with enemy creatures and straightforward puzzles, as well as optional areas full of loot that can be spent in the hubworld to unlock new abilities that save directly to the toy. In addition to general loot, there are hidden Soul Gems that unlock ultimate powers for each Skylander, hats that can be equipped to boost stats, and other secret treasures that lay hidden for no real reward other than completion.

Being aimed primarily at youngsters, it’s certainly not a difficult game that will stump the hardcore collective. Health drops are plentiful, and many tough opponents can be beaten through attrition simply by having enough toys to replace any that get knocked out. Still, there are a few later levels that can take a huge toll, and the game takes a “Kirby” approach to challenge, where simply clearing a stage is secondary to finding hidden items and crossing off various challenges on the checklist. It’s accessible for kids, but those looking for something a bit meatier can take on optional goals. 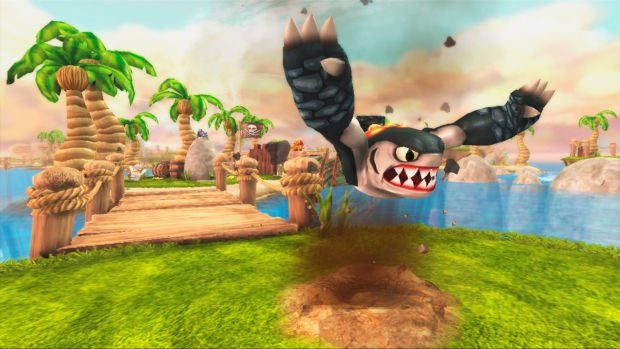 The swapping of characters is encouraged in areas where select elements gain extra strength. Every Skylander belongs to either the Magic, Tech, Life, Earth, Fire or Undead elements, and if their element prevails in a certain area, they’ll be more effective in combat. Furthermore, a series of gates scattered around the world can only be unlocked using specific elemental types. Having one Skylander of each element is crucial to unlocking all areas and gaining new hats or Soul Gems, providing the required hook for selling new toys. It’s worth noting that the game can be beaten entirely using the three toys provided in the Starter Pack. Exploiting elemental strengths of unlock element gates are purely optional extras — worth unlocking if you really want to get absorbed in the game, but not needed to see the ending.

In addition to the main quest, players can also unlock challenge areas, some which are surprisingly tough. Every Skylander collected unlocks a new challenge map, which bestows permanent stat boosts as completion rewards. Many of them are easy enough to beat, but a few will shock you with just how unreasonable they can be. The extra challenges add some longevity to the game, but what I feel is really missing is some sort of randomized mode. While there’s plenty of gameplay, there’s certainly not enough content to support over thirty characters. Having a more random, open-ended, or “free” mode would provide more stimulating gaming while grinding characters. That said, some upcoming toys contain all-new stages in their bases, so opportunities for added gaming will be out there. You can even make Skylanders battle each other if you have a friend and a spare controller.

Despite its uncomplicated nature, Skylanders is a fun little game. Upgrading the Skylanders themselves is insidiously addictive, as picking a table of favorite characters and getting them up to level ten can be quite compelling. They even have skill paths, allowing you to choose which of your Skylander’s abilities get to be the dominant one. As far as shallow games goes, this sits at the deepest end. 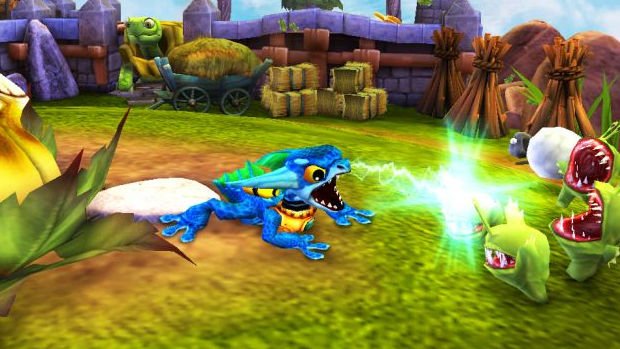 The truly impressive thing about Skylanders is how unique each character actually is. I was able to try sixteen of the game’s 30 characters, and aside from the recolored “Dark” Spyro, every character has its own unique look, animations, attacks, and upgrades. While there are similar body types, these characters aren’t clones of each other. It would have been very easy for Toys For Bob to limit the variation between each Skylander, but the fact that every single one plays differently is commendable.

The game is solid fun but not without its drawbacks. There is a spectrum of melee and ranged abilities, and each type has its limitations. Melee attacks leave characters open to damage, while the inability to strafe and target can make ranged combat frustrating. In the case of characters who have both close-quarters and projectile-based abilities, this isn’t so much of an issue, as their flexibility compensates for the flaws. However, some characters are almost exclusively melee- or ranged-based, and without the other type of attack to offset their drawbacks, they can be noticeably less useful in combat.

Furthermore, the game could have done with a little more variety in the gameplay itself. Levels grow repetitive as the same puzzles and similar boss fights crop up, and while there are a number of enemies that require specific tactics to beat, most of them go down with attack button spamming. Played in shorter bouts, this isn’t so much of an issue, but it doesn’t work well for extended periods of playtime.

Oh, and Toys For Bob would have done well not to namedrop Spyro, since this most certainly isn’t a Spyro game. It’s great that he’s an included character, but cynically pretending the game is themed around him seems to serve no purpose, as Spyro has zero impact on the game’s story. I don’t think the target market even cares or knows enough about him for his name to be a sales draw. I think the misleading title was a poor idea that only seems to brew up resentment among actual Spyro fans (yes, they exist). Simply calling it Skylanders would have been a lot cleaner and true to what the experience is about. 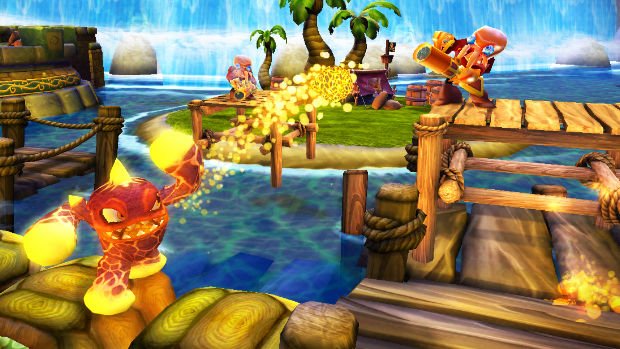 With such a big gimmick in place, nothing would have stopped Toys For Bob from lazily throwing together a terrible game, but genuine care and love appears to have been poured into the project. Every Skylander feels unique, the story is lightheartedly entertaining, and above all, the game is fun to play. I say that shamelessly as an adult, as well. It even looks quite good, with a fantastic art direction that draws me in and a cute aesthetic reminiscent of all those toys from the nineties.

Another unique aspect of the game is the cross-platform functionality of the toys themselves. Once you have the toys, they will work on any platform, and the Portal can even be plugged into a PC so that the toys may interact with the Skylanders website. Those who grow to love the game enough might want to check out the 3DS version as well, which contains alternative gameplay and will allow you to take your characters out on the road and its own wireless Portal that beams your toy’s information to the console. The Portal can be safely switched off, and the characters will remain in the game, allowing you to play with them anywhere. To save progress to the toys, players simply scan them a second time, updating their stats with any new experience learned from the game.

The 3DS version is more of a platformer game than a hack n’ slash one. Unlike the console versions, the 3DS variant allows characters to jump and dash and has players collecting special items to clear a stage before a timer runs out, lest the villainous Hektor catch them. It’s a more challenging game than its bigger brothers, and provides a nice little complement to the main entry while really hammering home the cross-platform nature of the whole idea. 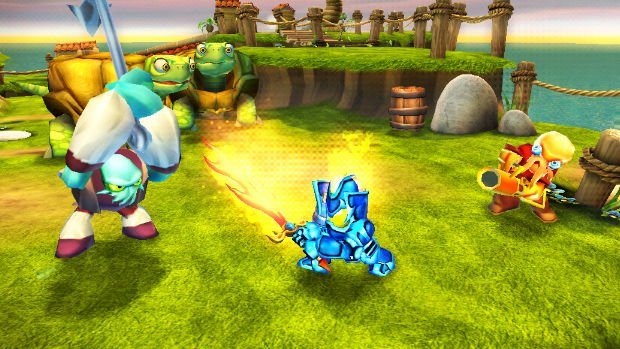 With Skylanders, a heartfelt effort was made to create a quality product rather than a piece of cheap garbage designed purely to sucker in the pre-teens. While there are obviously calculating marketing brains pulling all the strings, the end result is good enough for that to not quite be so evident while the game is in motion. A solid title was married to a very clever concept, and the result is something worthy of praise.

If you’re a parent looking for a Christmas gift, or if you’re just a big kid who wants to play with some silly (and well designed) toys, then Skylanders: Spyro’s Adventure comes wholly recommended. It’s not the most complex game on the market, but the innovative gadgetry and authentic thoughtfulness on the part of the developer stands out in a market so used to churning out the same old crap. Whether getting it for your children or pretending to get it for your children, Skylanders is a game that has a special something to it, and it’s well worth checking out.