Activision ditches the Spyro moniker but keeps the fun intact

Skylanders was one of the biggest surprises of 2011. Pretty much everyone expected it to be a cheap cash-in of 90s nostalgia to sell toys to unsuspecting kids — and boy, were we wrong.

It was actually a pretty fun, serviceable action game, and the toy craze took off like wildfire. Now here we are in 2012 with the sequel, featuring even bigger Skylanders and even more toys.

In light of this, I have bad news for you folks: it’s time to break out your wallets again. 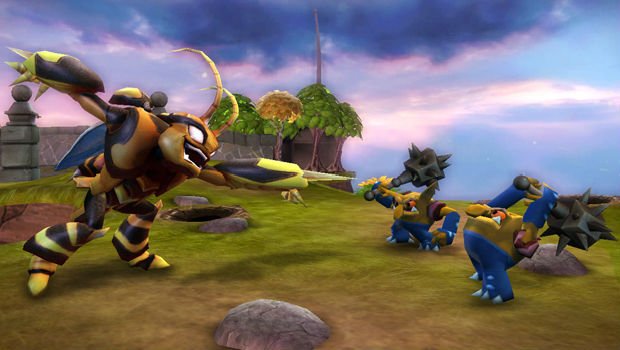 As some of you may know, Skylanders incorporates physical toys — lots of them! — that you can pick up at your local brick and mortar store. Using a USB device called the “Portal of Power,” you can digitize any number of the eight giants (read: big toys) or the 45+ smaller figures into your game. All the characters have a tiny microchip inside them that captures and saves their data, such as the amount of coins you have, your experience, and what Gamertag/ID they’re registered to.

Considering the main hook here is essentially peddling children’s toys, I hope you aren’t expecting a transcendent Machiavellian narrative of the subjugation of the proletariat. To be blunt, the setup is going to be really familiar with anyone who has ever watched a cartoon aimed at the 16-and-under group.

After the day was saved in the first game, the premise is basically your typical “big bad villain returns” scenario. The eight giants, once thought to be a myth to the citizens of Skylands, have now come out of hiding to band with the rest of the Skylanders and do battle with the evil wizard Kaos.

The tone is completely lighthearted, at times cheesy, but not overly hilarious. Just like the first game, it gets the job done. If you enjoy movies like the criminally under-appreciated The Emperor’s New Groove, you’ll have a good enough time in Skylands (especially so, as Patrick Warburton reprises his role from the first Skylanders, which is basically Kronk).

When it comes to gameplay, your experience will pretty much mirror any standard dungeon crawler you’ve tackled before. Obstacles range from simple puzzles to straight-up battles, and there’s even a home base of operations with various merchants (like the Diablo series).

Giants themselves offer a new layer to the series, as they’re required for traversing certain extra areas and obstacles, most of which are optional. They’re large, they’re lumbering, and as a result, most of them are slow, which may or may not suit your play style. That’s totally fine, as the Skylanders series is built upon giving you the freedom to use just about anyone you want (keep in mind that you will need a Giant on-hand for at least a few required areas, even if you can play 99% of the campaign without them).

As was the case with the previous game, the nuances of combat and exploration are going to be pretty basic, and since most characters don’t jump, it probably couldn’t even be considered a basic platformer. But it would be criminal to dismiss the game based on that premise, as there is a ton of depth here should you choose to dig further — and what it does offer, it does very well.

First, the optional challenge missions are back. They’re still quasi-difficult and task you with various objectives like “destroy X amount of enemies in a certain amount of time,” granting you bonuses should you succeed. These can be done very easily from the main ship at the beginning of every stage, and they’re even easier to get sucked into as you try to complete them all.

Challenges aren’t the only thing that will test your mettle, however, as there’s also a number of arenas to conquer, all of which net you some sort of reward. If you’re feeling lonely, local multiplayer is thankfully supported by way of full two-player coop (for the entire campaign), and a fairly meaty versus mode that has a decent number of different game types to choose from. 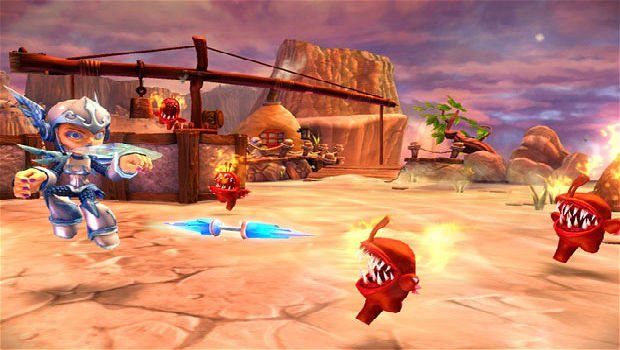 Add in hundreds of collectibles, a fully fledged Othello-like game called “Skystones,” ability gems hidden in each level, stat-boosting hats (hats are all the rage these days, I’ll tell ya), and optional in-game achievements that boost your stats and XP, and you have a full game that inherently gives as much back as you put in.

If you’re a completionist, you can level up your character to the increased cap of 15 (up from 10 in the first game). Earning XP and gold in multiplayer battles is also a nice touch (provided you have a local partner in crime, as there is sadly no online play support).

This all works well and good within the contained Giants ecosystem, but what about prior adopters? As we all know, Activision isn’t the most reliable of folks when it comes to backwards compatibility, so I’m sure a lot of you are concerned whether or not Giants will play nice with your old toys.

Thankfully, I’m happy to report that Activision and Toys For Bob did a solid job of serving both games. Figuring out what works where is fairly simple: look at the bottom of your toy’s base. If it’s green, it’s from the first game (Series 1), and if it’s orange, it’s from the second game (Series 2). All Series 2 characters that were carried over from the first game will work if you plug them back into the original. All new Series 2 characters (i.e. Giants) will not work with the original game (which is to be expected). These details are also clearly marked on the actual packaging for the toys. 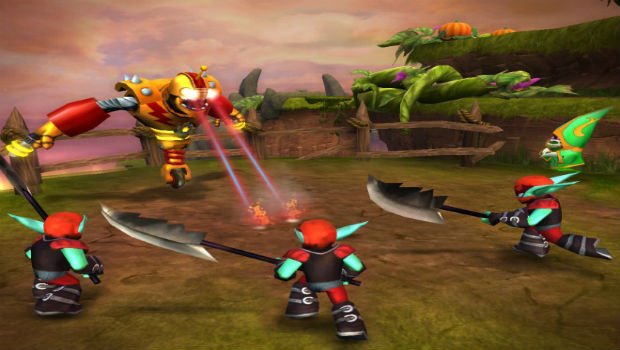 All of this works pretty effortlessly, even without a patch or title update of any kind. For instance, my wife and I were playing coop in Giants and she proceeded to upgrade and level-up a toy she had picked up a year ago. After going back to the original game later that day, all her stats, coins, and abilities/upgrades were still there. So if you’re interested in picking up the first game on the cheap some day, you can reap the benefits of re-using select characters.

In terms of length, there are 16 stages, each which take about 30 minutes the first time through, or 10 to 15 minutes for speedruns. If you’re looking for more replayability beyond going back to the original game or buying more toys, Giants has you covered with all of the modes and extras I mentioned above.

After playing through both titles, it’s clear that a lot of heart went into the franchise. This should please fans both young and old, provided you’re willing to go in with an open mind and embrace the simplicity.

Skylanders: Giants is a simple but incredibly enjoyable game, packed with content should you decide to explore every nook and cranny. Despite the fact that a lot of the characters are pay-walled behind what is essentially physical DLC, it’s still perfectly serviceable even with just the characters in the standard package.