Make sure to brush your teeth afterwards

Senran Kagura Burst didn’t receive a new, localized name when it was released on the 3DS eShop. That’s kind of a shame, as a more comprehendable title for English speakers might have gone a long way to communicate what the game is about to its new audience.

They should have called it Boner Jams: The Game. 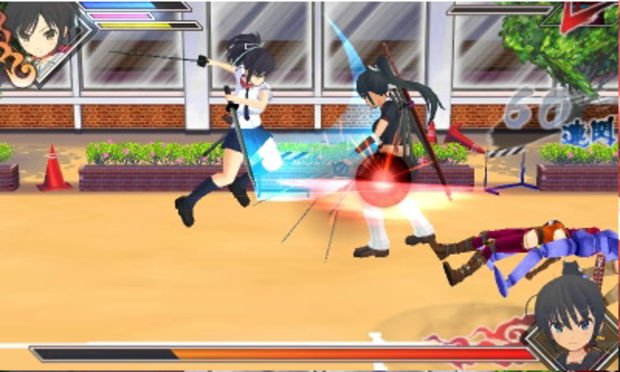 Senran Kagura Burst is actually a compilation of two Japanese games, the original Senran Kagura and its sequel, Senran Kagura Burst. The games center around two rival groups of teenage ninja girls, each taking on one of the “harem anime” tropes (serious one, horny one, the snobby one, the disciplined one, the child-like one, the unfeeling one, the insecure one, etc). They’re a likable bunch, with a surprising amount of personality and back story, though they remain generally one-dimensional. Sadly, detail does not always equal dimension. Still, they’re a personable enough. You’re sure to find at least one character you can relate with.

The graphics look pretty cheap, with frequent frame rate drops, inconsistent quality of animation, and medium-to-low polygon character models by 3DS standards. Given that the game was put into development at a time when the 3DS was struggling to build an audience, there’s reason to guess that the developers weren’t able to summon much budget from their publisher, and it shows. Without the money needed to generate a well-crafted product, they seemed to rely on the kinds of things that don’t require much craft to deliver. Things like sex and violence.

Almost all the characters have huge, unnatural-looking breasts, which they talk about often, and expose even more frequently. Sometimes they even use their busts for personal storage. The exception is Mirai, who has breasts that are not gigantic, though she talks a lot about how she is under-confident and flat-chested. She’s introduced to the game through one of its many lengthy digital novel segments, in a story that is mostly about how [spoilers] when your big-boobed classmates give you their underwear, it makes you cry and feel accepted as an equal, regardless of how childlike your boobs are [spoilers].

While I appreciate a token attempt to show these characters as sympathetic underdogs, it’s clear that the developers’ main objective was to find yet another way to get the player to think about breasts. The breast obsession in the writing borders on self parody. Playable characters threaten to motorboat each other with very little provocation. Serious-faced rival ninjas mock each other with the nickname “Jugs.” There is actually a lot of story here, often times quite touching and heartfelt, focused on overcoming trauma, the importance of friendship, and the dramatic process of finding love. That said, the main character of the game is definitely boobs. Every other narrative element feels like a side story or a supporting role 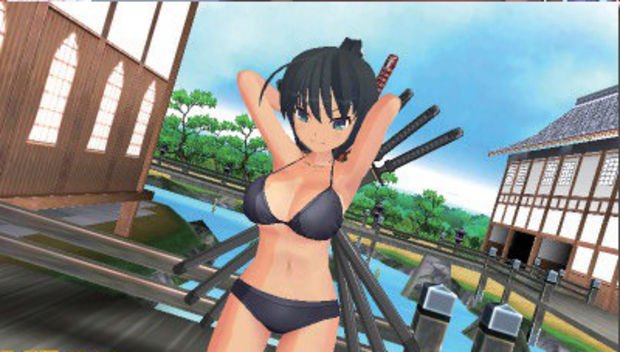 Breast exposure also plays a part in the game design. You start each level wearing a standard school girl uniform, but through building meter, you’d quickly be able to cause your clothes to explode off and for a new, unique, stat-boosting outfit to form over your body. It’s almost a nice message about how shedding the trappings of conformity can lead to empowerment, but like everything with this game, the idea is obscured by the gratuitous boob and butt shots.

If you want to take the clothes explosion even further, you can have your clothes explode at the very start of a level by activating “Frantic mode.” While frantic, you’re left in just your underwear, making you more vulnerable to damage, but more nimble. Completing each level in Frantic mode offers an end-game reward, but it’s pretty clear that the developers feel that seeing a voluptuous teenage ninja girl in her underwear is its own reward.

The combat is equally flashy and shallow. Most levels consist of straight courses filled with largely disinterested enemies waiting for you to hit them. The safest and fastest way to take them out is with long aerial rave combos. The combat system is simple, uninventive, but relatively fun if you like dialing in long chains of attacks. There is a light attack, heavy attack, dash, and jump, though you’ll be using light attack and dash the majority of the time.

Start a combo with light attack, wait for a green ring to explode off an enemy, then hit dash to fly into the air and start a floating mid-air combo. Keep mashing light attack, wait for the green ring, repeat until dead. You can mix it up by finishing with heavy attacks, or starting off with a jump or dash attack, but it’s rarely necessary. The combo meter is extremely lenient, allowing for a few seconds between attacks, or even a hit or two from an enemy, before it resets. It won’t be long before even the most bumbling, numb-fingered goof is pulling off 1,000-hit combos. 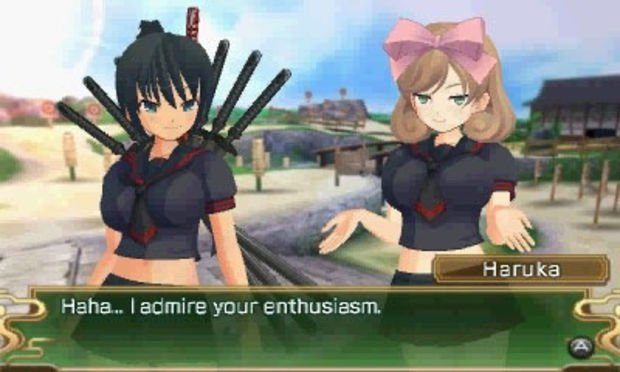 Each of the two games here have five initially playable characters, with one secret character each, making 12 playable characters between them both. Each of them have their own unique attacks and characteristics, including screen filling “limit break” ninja magics that offer up quite a spectacle. My favorites “magic” comes from Mirai, who pulls a giant stationary machine gun from her dress, holds it between her thighs, and proceeds to blow away every enemy on screen.

Second place goes to Yagyu, who summons the spirit of a giant squid as she utilizes her weaponized umbrella to take on all comers. Each character has slightly different movement speeds, jump heights, and their attack animations are all varied and stylish. They all have their own personality, but the most eye-catching is Homura, who attacks with six katanas at once, using her swords like over-sized claws. Still, the same light attack-aerial rave-repeat combo will work with any character you might choose, against just about every enemy you face.

Enemy characters often carry a light-hearted surrealism with them, like giant muscular schoolgirls, living artist model dolls, and giant pink robots. They may look different, but they all fight the same. Outside of a few projectile throwing jerks that may require a little more planning, you’ll defeat them all with the same strategy — approach fast, hit until dead.

Boss fights are mostly against other playable characters or rival sexy ninjas, and like the rest of the game, they don’t offer much challenge. I beat at least one boss in 12 seconds. Every once in a while, the game will suddenly spike in difficulty, but its never due to there being any actual design ideas — just cheap shots and arbitrary time limits that make things more challenging than you might be used to. 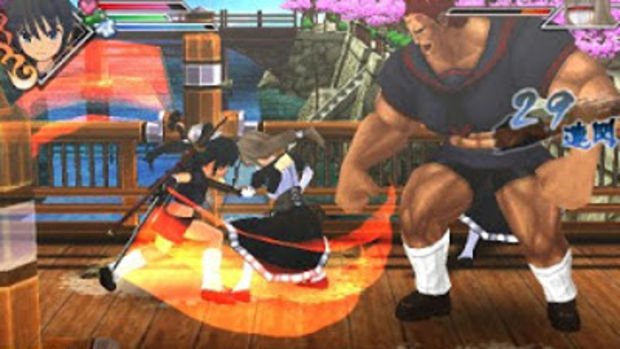 There are token attempts to provide the illusion of greater depth. You can level up characters and learn new moves, but they don’t mean a whole lot when the entire game can be completed with your mind on auto-pilot. There’s also plenty of in-game achievements and unlockables, including text-based profiles, art, animation, and a lot of new costumes for your characters. The amount of new outfits in the game actually borders on the absurd. There is a dressing room mode that allows you to spend extended periods of time trying on different outfits, with the prerequisite boob-jiggle and adjustable camera. Surprisingly, there’s no up-skirt shots. My guess is that it’s not out of lack of interest, but lack of budget. It costs money to render crotches.

Senran Kagura Burst has a lot going for it. It’s often times quite charming, the 2D illustrations are very well done, the almost-all girl world they exist in offers a nice fantasy for those that are sick of the male-dominated game industry, combos are fun to pull off despite their simplicity, and the character designs are pretty expressive (sexually and otherwise). All that is held back by the fact that the low-budget graphics, distracting breast-obsession, and overall lack of actual game design. There’s potential for this series to be more than sex and combos, but so far, that’s all it has going for it. It’s cheap, sweet candy with little nutritional value that might make you sick after a while.