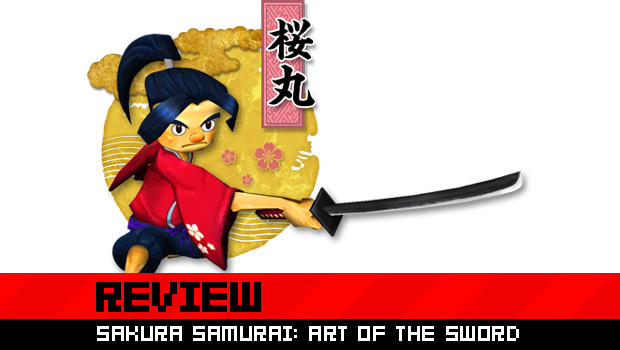 It’s always a pleasant surprise to go into a game with little to no expectations beforehand and come out of it with a completely positive opinion. Such was the case with the recent downloadable title Sakura Samurai: Art of the Sword.

The game wasn’t even really on my radar, but after playing it, I realized I should be paying more attention to Nintendo’s eShop library.

The game begins with the titular hero, the unassuming Sakura Samurai, charged with rescuing Princess Cherry Blossom from the clutches of an evil force. This task, as well as the sword for which our hero is named, is given to our hero by a frog-like mystic creature called a kappa. It’s a simple beginning, but across the game’s 30 areas (including three boss levels and three villages), the player requires a daunting amount of skill and precision.

The gameplay’s structure is simple in design but increasingly difficult in execution. Sakura travels to different areas on the map, where he’s thrust into battle with various types of foes. Each foe has a few different attack types which you can block with the shoulder buttons or dodge with the B button plus a direction on the analog nub — left or right to dodge stabs, back for slashes. The precision of your dodges is key, as timing them properly will award you precision points that can be traded in towns for gold.

Attacking is done with A, resulting in a quick slash followed immediately sheathing the sword. As you perform blocks or as foes block your attacks, your will wear down your blade, which can be sharpened back to full strength with a whetstone. Blades can be improved at shops in towns as well, granting stronger attacks against foes. Once enough attack energy has been gathered from well placed blows, you can execute special attacks with the press of Y. After an area of the map is completed, half of a cherry blossom petal is awarded, with every two halves resulting in an increase in health.

The enemy variety is fantastic. You’ll first encounter general sword-happy baddies then continue with archers, throwing-star ninjas, bomb-tossers, and more, each who mix up their attacks and may require multiple dodges before you can land a counter. While most attacks from enemies are easily telegraphed, later levels contain quicker, deadlier foes. The difficulty increase as you progress almost feels like a reward for sticking with and honing your tactics.

Graphically, the game is simple yet beautiful almost like a painting. The 3D effects are sparse, but the depth of field is used well with only the occasional visual gimmick thrown in (such as a boss making a stabbing motion towards the camera). The visual detail helps highlight enemy attacks, allowing for (initial) ease in anticipating which dodge to perform.

In towns, you’ll encounter inns and “Frog Plus” shops, where you can save your game, buy items with the coins you’ve collected or traded your precision points for, and upgrade your sword. Items (which are mapped to the D-pad) include whetstones, rice cakes for restoring health, throwing blades, and frogs, which are used to distract foes. There are also NPCs that engage the player in mini-games with skill-advancing prizes. There’s tons of personality in the towns, a welcome change from the straight-forwardness of the battle areas.

Once you’ve beaten the game, more gameplay modes unlock, such as 30-, 50-, and 100-thug challenges where you’re tasked with a set number of foes to defeat per wave. There’s also a hard mode where you have tougher enemies but only three units of health and no way to restore damage other than staying at an inn. There’s even a rock garden, which takes the steps from the system’s sleep mode pedometer and “dedicates” them to blooming cherry blossom trees.

If there were any negatives to be had, it would be that, initially, there is no way to save your progress until you reach the town, which doesn’t occur until you’ve defeated the first four or five levels on the map. After that, I found myself backtracking to the town after each level was completed, but that may be just because I tend to want to constantly save my game. Also, for the first few levels, enemy attacks seem rote until the introduction of new enemies, after which then the original enemy types learn new attacks. Because of this, I was almost lulled into a false “dodge, fight, repeat” pattern until I realized that my tactics would have to change further along.

For such a little title, I wasn’t expecting to pour so much time and effort into Sakura Samurai. From its simple story yet compelling tactical gameplay to its gorgeous graphics and controls, I was hooked. This is possibly one of the best downloadable titles on the eShop, one that will draw players in with its ever-increasing depth. A must have!