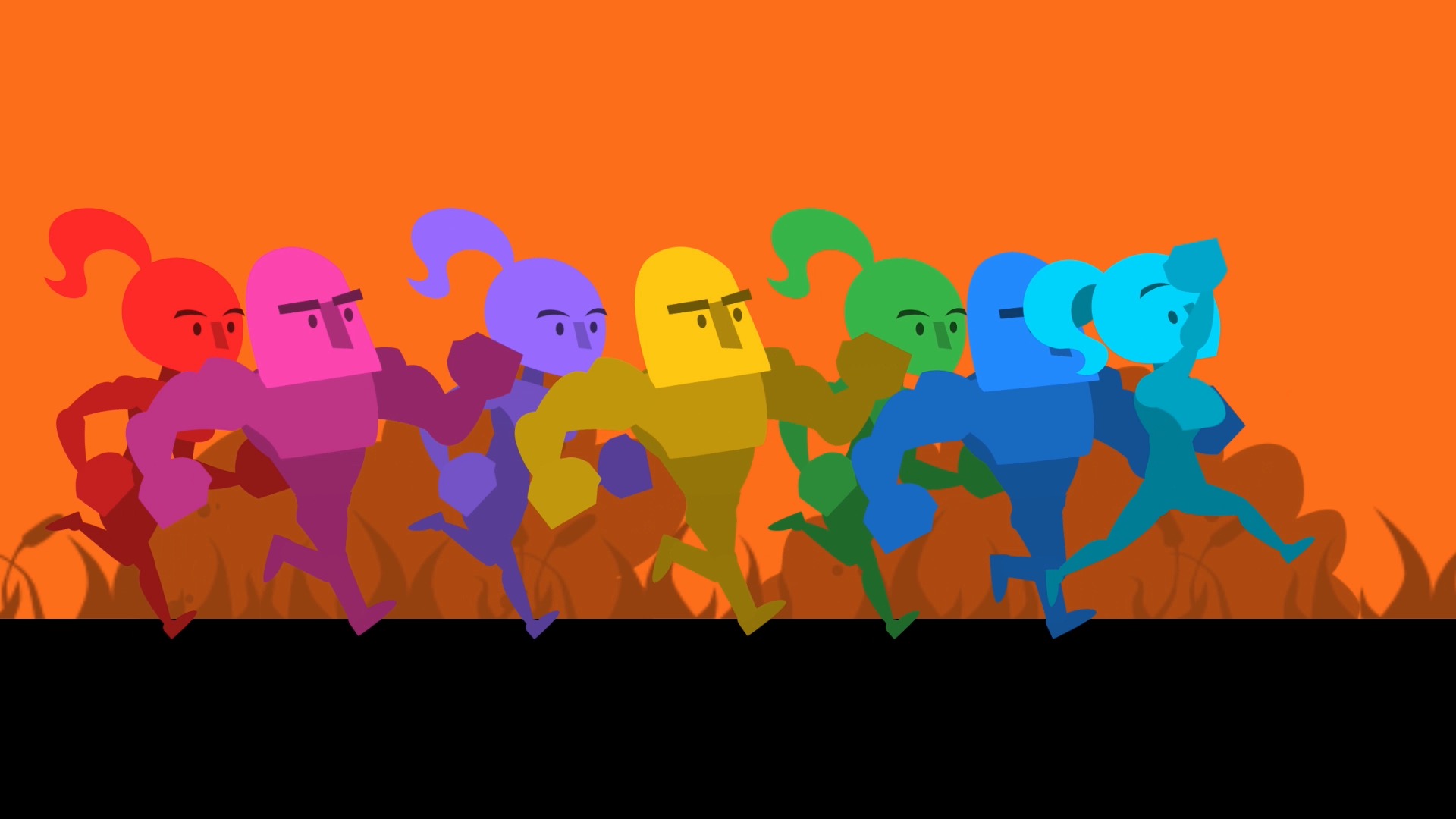 There’s been a renewed interest in party games this generation, and I’m loving it. While I’m all for any number of engrossing solo experiences that take a hundred or more hours to complete, on an equal level, I want to chill out and play with friends.

Luckily, Runbow is a rare example of a title in the genre that stands on its own, no matter how many people you bring to the party.

The concept is so simple, anyone could pick it up. Runbow is predictably all about running. It’s not an auto-runner thankfully, as you’ll have full control over your character by way of directional movement, jumping, punching, and if you wish, taunting. Since the latter ability isn’t needed, it’s essentially a two-button game. But there is depth here, as the punch button fractures off into multiple powers, granting players a horizontal dash if done in the air, an upward Street Fighter-esque punch, and a downward butt slam.

All of these are functional when it comes to knocking around your foes (more on that later), but they’re also great platforming tools as well. The uppercut in particular is excellently designed, and have saved me from pit deaths on more than one occasion. Every character in the game (of which there are a ton) has the exact same moveset, but it works that way — there are a lot of nuances as it stands, and no one has to learn the ins and outs of different runners.

Said nuance is found mostly in the way that platformers themselves are presented, in a number of different color schemes. A “wave” of color will periodically sweep over the screen, eliminating objects with that same hue. So for instance, there might be a combination of red, yellow, and blue blocks, and in three second intervals, said waves will eliminate each color in succession. So it’s up to players to not only master the moveset, but pay attention and memorize patterns.

The best part of Runbow is its variety. There’s a staggering amount of modes available for players of all skill levels, and a few of the meatier ones are satisfying even if you’re going at it solo. One such game type is “Adventure,” which tasks you with defeating an evil monochrome boss who feels left out, amidst all the other colorful world inhabitants. You’ll progress through over 100 levels to complete the story, taking on a number of different objectives within the campaign itself. The bright, vivid color scheme makes things more interesting, as well as appropriate sound effects, I don’t normally talk about game soundtracks as they generally don’t stick with me for very long, but Runbow‘s is one of the best I’ve heard all year. Just give it a listen.

Levels can range from boss fights, to enemy skirmishes, to races, to even hunts. Even with no AI option, I had a great time playing through the story with friends and by myself — it’s never boring, and you have the option to go for the best clear times (which in turn can unlock new characters). It’s delightfully old school and frankly, one of the best single player party games I’ve played in quite a while.

Of course the party modes are core to the experience, which includes races, arena battles, and King of the Hill modes. The former is more of a traditional platforming experience, with levels that scroll like in Mario games, and plenty of enemies, pitfalls, and hazards to deal with. It’s set at a rapid-fire pace, so if someone dies, they’re out for that level, and they don’t even have to wait long since most stages take 30-45 seconds to complete. It’s fast, it’s fun, and optional power-ups make things even more enjoyable if you have an array of skill levels playing.

Arena and King of the Hill are more like a Smash Bros. experience, as all combatants will need to kill enemies by way of punching them into oblivion (or make them fall to their doom). This is where the butt stomp and uppercut shine, as you’ll have a tool for every occasion in combat. All of the aforementioned modes are playable by up to eight people, with almost any combination of controllers (GamePad, Wii U Pro Controller, Wii Remotes, Wii Classic Controller, and Nunchuk). The “Colour Master” mode allows for a ninth player who uses the GamePad to add in hazards themselves, competing against the other team of runners. It’s not as strong as the other modes, but it’s a nice distraction.

Finally, the Bowhemoth mode is the most challenging game type on offer, and will be an exciting prospect for even the most hardened platforming veterans. My first win took me 33 minutes and 73 deaths to complete, and it’s also playable both solo and with friends. You can’t save mid-session, so you’ll have to make do with one full run with as few deaths as you can spare. Online play couldn’t be tested at the time of this writing, but the fact that it’s included in an indie game like this is a godsend.

For the price, I’d still recommend Runbow for solo players, as long as you really love platforming. Even if you only enjoy the genre just a little though, it’s still a fantastic party game.