CD Projekt Red has the benefit of releasing a major game once in a blue moon to a roaring applause.

I was hooked from the very first Witcher (which is frankly still some of their best narrative work), and continued on through Geralt’s journey into card game-dom. Now, we’re fast-forwarding that old fantasy timeline quite a bit with Cyberpunk 2077.

While it’s more than adequate at giving us a general look at a dystopian techno-future, a lot of the details are muddled.

The last time we spoke in my review in progress, I was enjoying the side content and the general feel of Night City more than the actual campaign. Nothing has changed since then.

Without giving away too much, your avatar (named “V”) busts into Night City and tries to make a name for themselves as a hustler and odd-job-taker. Very quickly (I’m talking a few hours in) you get wrapped up in a socio-economic plotline involving some of the biggest names in the city, and become mentally entwined with Johnny Silverhand (Keanu Reeves) via technical wizardry. Johnny is pretty much present for the entire shebang as a Great Gazoo figure (he does basically call you “dumb dumb” a lot!), and for the most part, appears randomly and taunts you: eventually you start to learn more about his story and forge your own.

It…works until it doesn’t. Again, a lot of the meat of Cyberpunk is found in the cracks between the main questline. Many supporting characters have a compelling story to tell; you just need to coax it out of them through optional missions, because the critical path really isn’t going to deliver on that front. In some sections it feels cobbled together and rushed, quickly dispensing lore dumps and then whisking you out of a fixed location.

Some campaign quests have this really obvious “massive cut” that amounts to a short load screen when you’re just at the apex of something exciting. Either it’ll knock you out with an errant blow to the head, or you’ll get a jarring load screen that will transport you to an entirely different location. It’s all meant to be stylized, but in some instances, it feels like the team just wasn’t sure how to end a sequence.

The sidequests on the other hand aren’t afraid to get weirder. In fact, I spent a lot of time embarking upon these oddities thinking “why weren’t these just campaign missions?” Some of the most meaningful dialogue, character growth, and interpersonal relationships are buried within these quests that a lot of people will never see (which is why I’m glad I took my time with this review). It’s almost like these portions of the game were designed by a different team; or hungrier, more junior developers. That lack of polish also applies to the RPG elements; which might be one of the most disappointing pieces of the package given that this is based on a tabletop RPG.

Loot and inventory management can be a mess, often resulting in chasing menial stat-boosts that barely impact gameplay in any meaningful fashion. Crafting similarly feels like a complete afterthought, as do many of the “plus stat” skill-up perks that you’ll apply between leveling. Depending on your build you’ll either gain completely new abilities, or a few stat points here and there. At first glance Cyberpunk 2077 seems to have expansive skill tree and crafting systems, but they’re only skin deep. 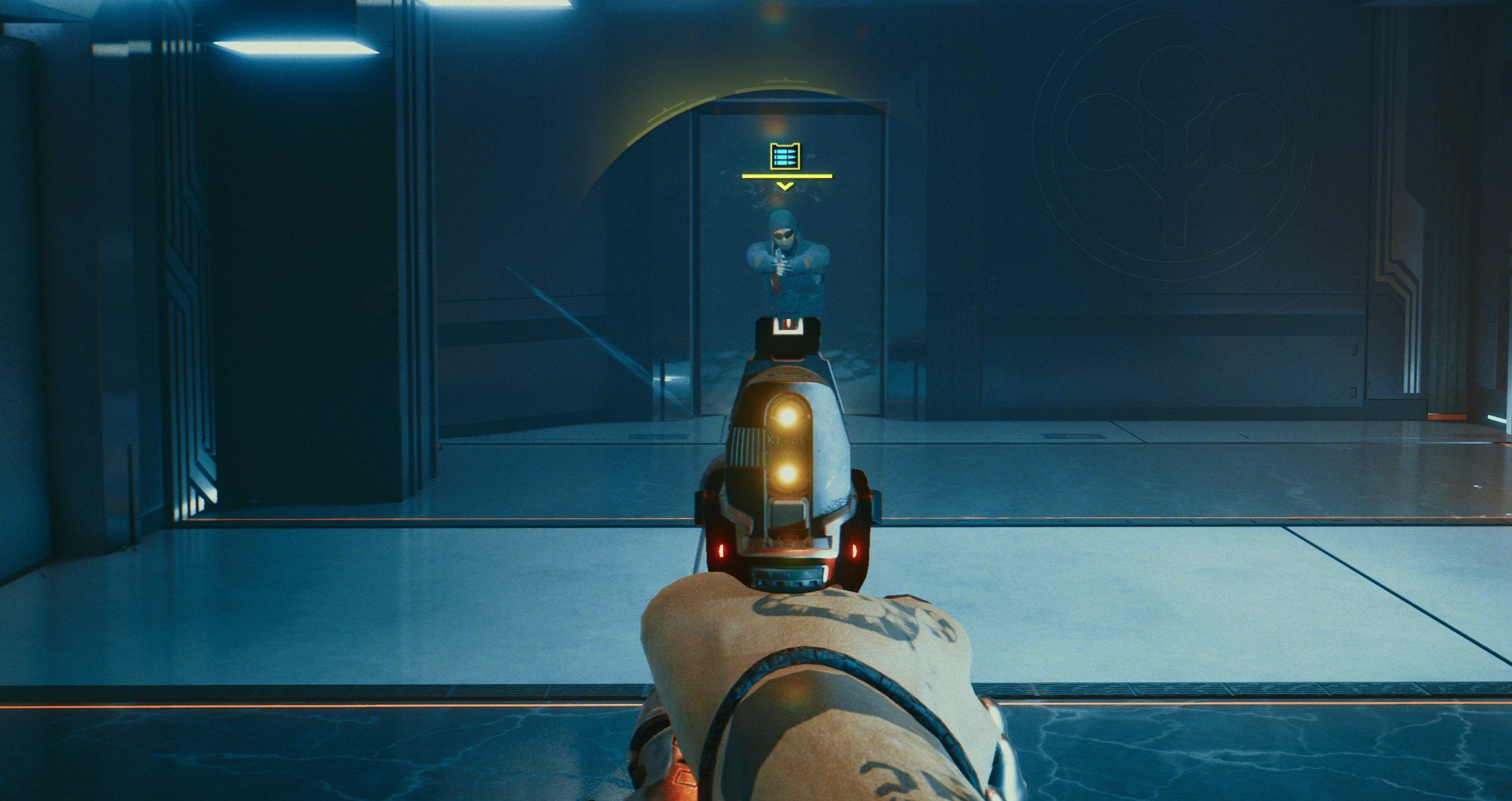 The main strength of Cyberpunk 2077 is the joy found in stomping around the open world. It can feel sterile at times (particularly with some gaunt and lifeless NPCs), but when something randomly pops up (like a new building, sidequest, or open world event), it’s fun to just hang out. That counts for a whole lot in a game like this, and was one of the best parts of Witcher III. In fact, it saved the game for me from descending into “okay” territory. On PC, when the game isn’t bugging out, Night City can look beautiful and imposing. I’m still going to be aimlessly trekking through it for the foreseeable future.

So at the time of the review-in-progress last week I didn’t have any major bugs to report; but lo and behold I came across some, even with the day-one patch. Most of what I experienced are minor visual and AI issues, including cases like this one right here: where the vehicle on the right flipped out and whirlwinded around like the Tasmanian Devil. But there’s stuff that’s more severe than that. Another bug killed me after opening up an elevator shaft door (I assume the physics system sprang it into my body at 1000x the force required and did enough damage to take me out), resulting in 10 minutes of lost progress during a relatively low-key walking sequence.

In one instance, loading a save didn’t spawn the enemies required to actually finish a mission: putting me in an endless loop. In true Ubisoft fashion, I was saved by the constant auto-save system, which brought me back to an earlier checkpoint. Oh, I also crashed out twice and lost around 10 minutes of progress each time. Note that you cannot save in combat, nor can you save during an in-game cutscene: so if you feel a crash coming, sometimes you can’t do anything about it. At most, I lost around 45 minutes of progress that I can live with, and dealt with some easily-bested glitched AI and a few wonky visual effects. It’s not the end of the world, but the lack of polish is so obvious, even on PC (which is arguably the most stable platform of them all). 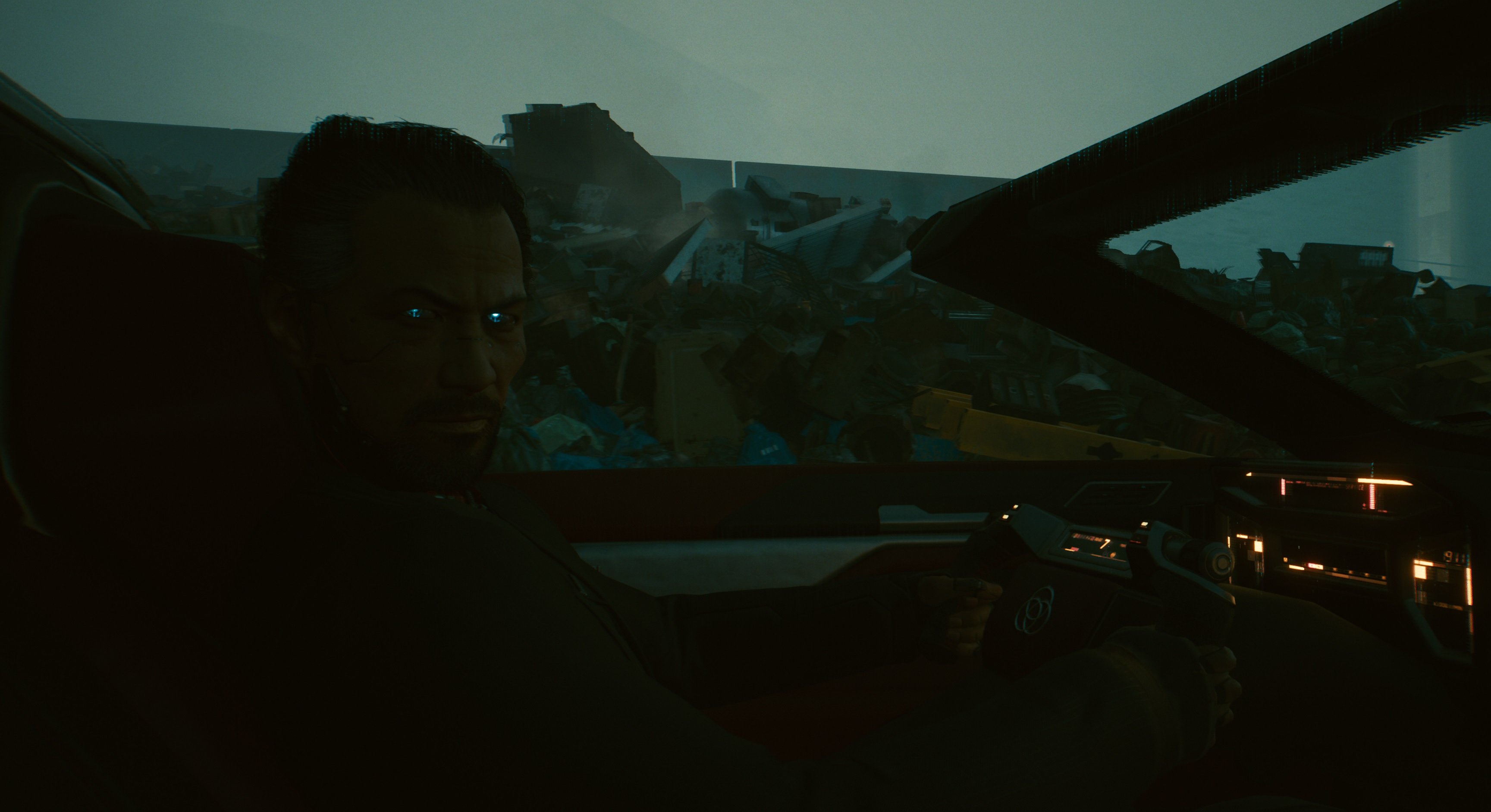 Cyberpunk 2077 is a victim of bloat, but you can choose to ignore a lot of it and take in the sights. That’s where Night City is at its best, and I sincerely suggest that you take your time going through it, as rushing will only lead to disappointment. Even just strolling through though, you’ll probably be left wanting more.