Chilean independent studio ACE Team made a name for itself with Zeno Clash, an oddball game that continues to freak me out to this day. (Do not Google “Father-Mother.” Don’t.) These guys have garnered a reputation for producing unusual, stylish titles that aren’t quite like anything else on the market.

This trend continues with Rock of Ages, I’m happy to report. Once again, ACE Team has partnered with publisher Atlus, which means its latest release will be hitting up the usual three digital distribution platforms. Cherish the moment, because it’s not every week we get such well-crafted originality.

I’m not entirely sure how the developers reached this conclusion, but essentially, Rock of Ages is an artistic journey through time and space, as seen through the eyes of a boulder … which, strangely enough, has a literal face. Told you these guys were creative!

The adventure begins with the Greek mythological figure Sisyphus. As the legends say, he is forced to push a boulder up a hill by hand — only to see it roll back down again and repeat the process — for eternity. He decides that the best way to escape this fate is to use the giant rock against, well, everyone.

Fittingly, Rock of Ages begins with an aesthetic inspired by Ancient Greek pottery. In fact, Sisyphus — and all other famous historical (or artistic) figures shown throughout the game — appear almost exactly as they originally did in their given medium and style.

It’s an absurdly cool effect, both in the hilarious cut scenes that introduce each fictitious fight, and in the levels themselves where non-playable characters appear as cutouts in a 3D world. 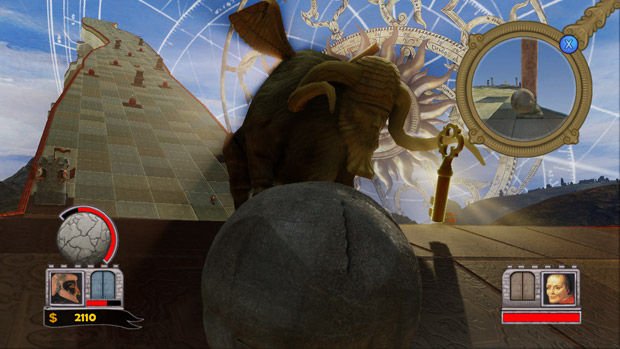 You’re given a surprising amount of control over your boulder, given its size, and can even perform jumps. Think Super Monkey Ball, only … chunkier. The goal is to ultimately get to the end of a stage in one piece. Hitting enemy towers and other defensive structures will earn you money, but doing so also cracks away at your character, eventually causing him to lose a layer or even completely crumble, if it gets to that point.

Interestingly, there seems to be no real punishment for falling out of bounds other than losing the time it takes to respawn back on solid ground.

Hitting your rival’s castle gate knocks off some health (usually about one third). When it hits zero, the door will be breached and all that’s left is to roll over the person or thing hiding inside. Money earned can be spent on one-time-use upgrades for your boulder, like spikes, or wings which give you a double jump.

Did I mention the collectible keys? Yeah, there are hidden keys to find in every mission. Enjoy, completionists! You’ll need a handful to gain access to every single-player level, but the vast majority of keys can be skipped. 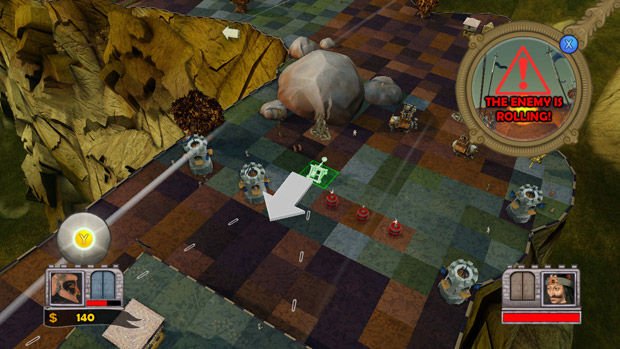 Upon losing your boulder or hitting the gate, you aren’t allowed to immediately jump back into the action. Rather, you enter the strategy phase. Any money you have built up can be put toward defenses that are placed on the enemy’s side of the map from an overhead view.

At any point during this time, you can bring up a selection wheel to choose different unit types, all of which come in a few different upgraded (and therefore more expensive) forms. While all of this is going on, a timer of sorts is counting down until your next boulder is ready to go.

If it so happens that you are in this defensive phase and your opponent is controlling their boulder already, you can manually drop down attacks from the sky, but this requires some exceptional timing-based skill for the most part. Rock of Ages is played in real time, so both players (AI-controller or otherwise) aren’t always going to be lined up.

Scattered throughout the game are a few boss levels. None of these are particularly challenging, involved, or noteworthy — you are just trying to hit a weak point a few times — but they do help break up the repetition somewhat. I will say that they are all visually interesting, and the final boss was a fun twist. 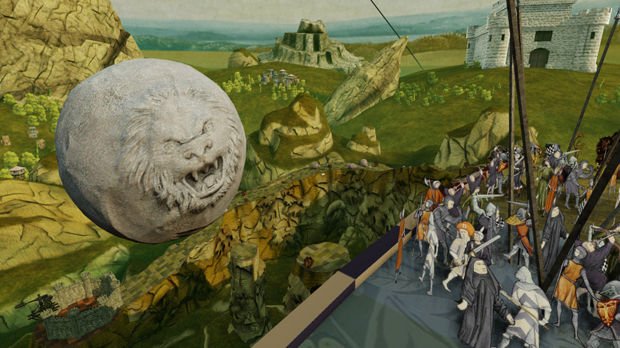 Your opponents, for the most part, put up a good fight. That said, Rock of Ages tends to devolve into a race to see who can hit the other guy’s castle three times first. Defenses rarely, if ever, are good enough to completely wipe out a boulder. My go-to tended to be this one structure type which produces wind that can easily knock the AI off course.

There are around twenty story missions in all, most of which go down as described above. You’ll travel through a number of different artistic periods, resulting in rather drastic changes to the environment art, so it’s still engaging even if much of the game does play out similarly. These titular ages are probably the biggest draw to Rock of Ages.

On the whole, there’s a great sense of humor as well. The base multiplayer mode functions exactly like the levels in story mode, so I won’t really get into it. In my experience, the netcode was where it needed to be. I guess the issue here would be that of how long the community remains active.

Rounding out the content is SkeeBoulder mode. It’s basically Skee ball with point multipliers, except you don’t have to worry about throwing the ball too hard and getting yelled at by Chuck E. Cheese’s staff. I didn’t care for this so much, but its inclusion is appreciated. Same goes for the time trials, which let you go through the same levels again, only this time you’re merely trying to earn medals based on how long it takes to reach the finish line. 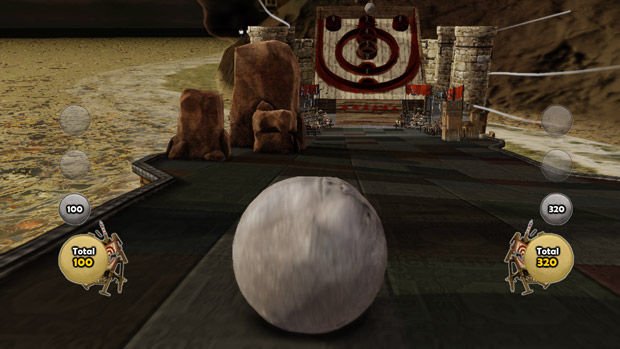 Even though Rock of Ages can safely be completed in an afternoon, it’s a largely well-executed game unlike any other I’ve played on XBLA/PSN/Steam. While the core mechanics may result in similar outcomes on a level-by-level basis, they are enjoyable mechanics nonetheless.

Rock of Ages is good for a few deep laughs, has tremendous art design, and is worth experiencing by most everyone given the price and ridiculous premise. Anyone on the fence need only demo the game to immediately see whether or not the full version is for them.