Ridge Racer 3D is one of two racing games available for the 3DS at launch, and since the other one is part of GameLoft’s Asphalt series, there’s really only one choice.

Ridge Racer 3D‘s overall goal seems quite clear — to use the visual perspective of the racing genre to be the prime example of the 3DS’ 3D gimmickry. It almost seems like creating a decent racing game is a secondary goal, so it’s quite some pleasant surprise that Ridge Racer is quite fun, too. 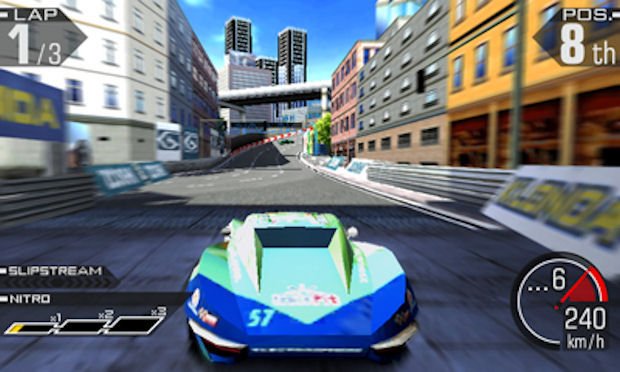 Fans of the Ridge Racer series can expect a mostly familiar experience, with 3D mostly taking popular courses from past games and sticking to the franchise’s arcade racing roots. For the most part, Namco Bandai’s 3DS launch effort is a fairly standard, basic racing game that does exactly what it needs to do in order to be solid, if not outstanding.

New additions to the series come in the form of some fresh car selections, and a range of perks that can be purchased before each race. Perks are bought using points earned from successful races and take the form of extra nitrous bursts and automatic rocket boosts. The perks make for a cool new addition, but it would have been great to have more choices and unique abilities to choose from.

The races themselves are damn fun with some nicely designed, if aesthetically similar, tracks that put the focus on skillful cornering and drifting. After a while, the races seem to feel identical, but for quick racing on the go, this is a terrific choice helped by satisfying, responsive controls that work really well with the 3DS’ button layout and new analog nub. 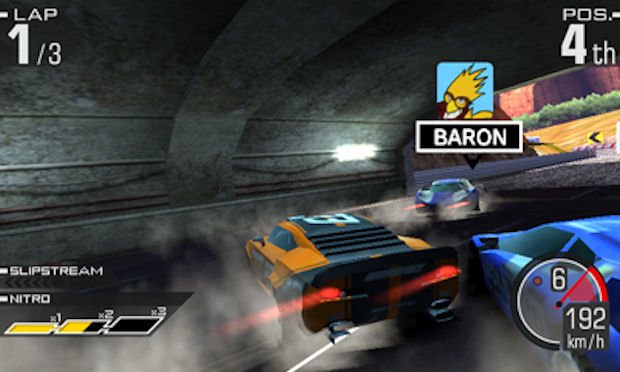 There’s a variety of predictable race modes to choose from. You’ve got Grand Prix, which allows you to unlock new tracks and cars, standard one-off races, automatically generated “quick tours” that create games based on how long you want to play, and the obligatory time attack courses. You can also take advantage of Streetpass to duel against ghost racers, although obviously that requires you to be situated in a city of 3DS users who all have Ridge Racer.

The biggest disappointment is the lackluster multiplayer section. Ridge Racer 3D supports local play only, with no online component. It feels like a missed opportunity, especially due to the difficulty outside of Japan in getting a local handheld multiplayer session started. For instance, it’s logistically impossible for this particular reviewer, since I am the only 3DS owner I know in the State.

At least efforts have been made in the audio/visual department — but then, that seems to be the main point of the game, so it ought to be good. As expected, the 3D visuals work really well. With 3D turned on, everything has a strange sheen to it, like the cars and environments are made out of glass, but the graphics are still very appealing, with bright, colorful tracks and cars that can be lightly customized with a range of cool paint jobs. 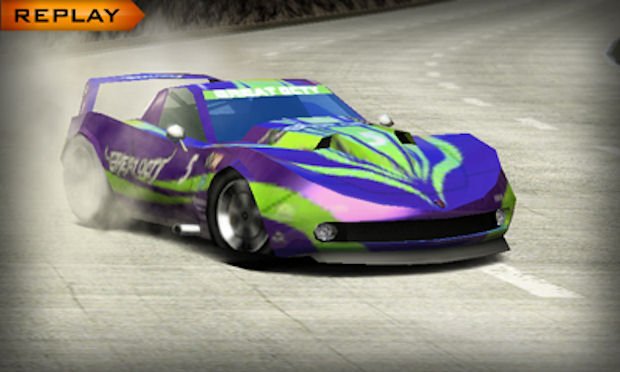 Ridge Racer 3D demonstrates how effective the 3DS’ visual effects can be, as rival cars appear in the distance with a deep sense of perspective and passing trees impressively zoom past the camera. A few extra tricks, such as ticker tape hitting the screen before fading away, adds to the visual magic. As impressive as it looks, however, Ridge Racer 3D seems to have a problem with blurriness, moreso than other titles. It’s a lot harder to keep the game in focus with 3D turned on, and even when you find your optimum distance and position, there seems to be ghostly images subtly appearing around vehicles and objects. While caught up in a busy race, it’s hard to spot, but you will spot it eventually.

As always, the game has a soundtrack full of bangin’ tunes and phat beats, and the perpetually upbeat announcers constantly gibber and commentate on your progress. Your mileage may vary when it comes to the sound — some of you will find it endearing, others will simply be annoyed.

Ridge Racer 3D is a damn good game, and well worth considering if you’re finding the current range of titles disappointing. As with all launch titles, the game doesn’t feel quite so fleshed out as it could have, and it’s clear that the game is ticking boxes to meet standards, rather than go that extra mile to produce something great. Nevertheless, it’s a fun game that feels good to control, looks impressive and delivers some classic arcade racing that’s perfect for quick bursts of portable play.

Can’t go too wrong with that.